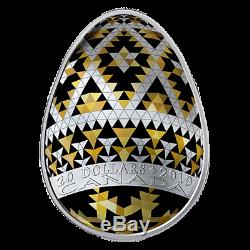 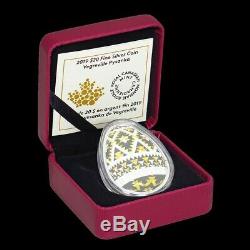 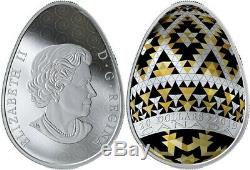 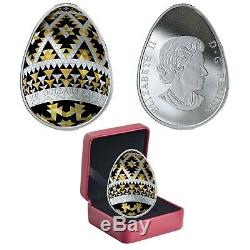 45 long x 33 wide. At the eastern edge of Vegrevillle, Alberta, stands an egg-shaped symbol of harmony. The 2,300-kilogram pysanka is a centennial monument to the Royal Canadian Mounted Police.

It is a wonder of computer-aided design, complete with colorful patterns that are a celebration of peace, history and tradition. Our fourth pysanka coin is an easy-to-hold version of Vegrevilles world-famous Ukrainian Easter egg.

On the reverse, every symbol, color and detail has a special meaning even the appearance of tiles that turned a cultural expression into a geometric marvel. Your coin celebrates the giant Pysanka statue from Vegreville, Alberta!

A CELEBRATION OF UKRAINIAN-CANADIAN TRADITION. This pysanka coin is a representation of the Ukrainian Easter egg monument in Vegreville, Alta. Home to one of Canadas largest Ukrainian settlements.

AN EGG-SHAPED COIN AND THEME! On the egg-shaped design, deep colors and engraved details capture the intricate beauty of the pysanky tradition. A pysankas colors and symbols each have special meaningas they do on your 99.99% pure silver coin. Your coin is a small-scale reproduction of the Vegreville Pysanka. Fine engraving mimics the tiled look of the geometric design, which includes five key elements: a radiating sunburst to symbolize growth, fortune and eternal life; triangles that signify a trinity and unity; a straight band to represent eternity; six-pointed stars that are a representation of windmills, a symbol of a good harvest; and finally, a wolf tooth pattern for security, as a tribute to the Royal Canadian Mounted Police.

The colors are also symbolic, with gold and silver representing fortune while bronze signifies the land that sustained Vegrevilles early population and their descendants. Constructed in 1975, the Vegreville Pysanka stands three and a half stories high and measures 7.8 meters (25.7 feet) long by 5.5 meters (18 feet) wide. Paul Maxum Sembaliuk designed the pysanka, while computer modelling made it possible to use two-dimensional tiles to create the three-dimensional egg. It took more than 12,000 hours to design, manufacture and assemble the puzzle-like design, which consists of 524 star patterns and 2,208 equilateral triangles.

In all, the structure has 3,512 visible facets that are supported by 177 internal struts, and all held together with 6,978 nuts and bolts. The egg-shaped monument is clad in anodized aluminum, with specially selected colors that will never fade.

It turns in a strong wind just like a weathervane! Beneath the giant egg is a written caption in four different languages (English, French, German and Ukrainian), which speaks to the communitys multicultural history. Your coin is encapsulated and presented in a Royal Canadian Mint-branded maroon clamshell with a black beauty box.