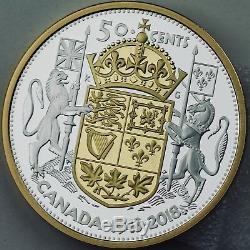 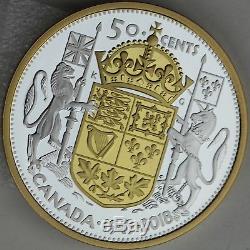 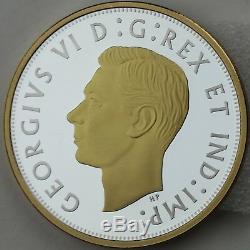 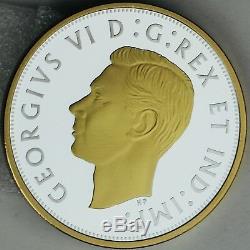 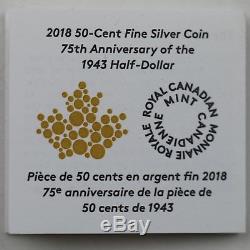 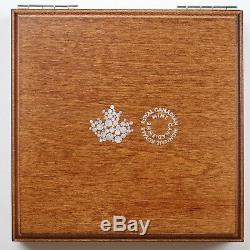 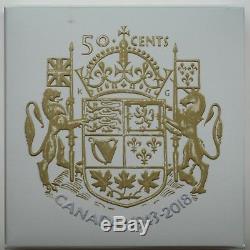 2018 EXCLUSIVE Masters Club 2 oz. All coins offered in this listing are unsearched! All of our Canadian coins are acquired directly from the Royal Canadian Mint - The counterfeiting of numismatic coins, and the sale of stolen coins, are serious problems for coin collectors and dealers. Unlike many other coin dealers. To protect against these risks, we do not sell'second-hand' coins.

Face value: 50-cents (a legal tender Canadian coin). Canadas 50-cent remains a constant, if elusive, collector favorite one whose heraldic design imbues it with a deep sense of tradition and speaks to the history of a proud nation. This exclusive coin looks back at the half-dollar issued in 1943, which is re-created here in pure silver with a celebratory touch of gold plating. A collectible retrospective on the story of Canadas half-dollar! This 75th anniversary piece re-creates the 1943 issue of Canadas 50-cent coin and it was made available only to Masters Club members!

2 OUNCES OF FINE SILVER! Nearly double the diameter of the original issue, this commemorative half-dollar is meticulously crafted in an impressive 2 ounces of 99.99% pure silver! Selective gold plating adds a touch of elegance to the Arms of Canada on the reverse, the effigy on the obverse, and the rim that frames the mirror-like proof finish! The obverse features the effigy of King George VI by T.

Paget just like the 1943 half-dollar, including the IND: IMP inscription in the legend. Each coin is ready to display in its limited-edition wooden case and comes beautifully packaged in an attractive graphic beauty box. The Royal Canadian Mint certifies all of its collector coins.

Most of these are serialized certifications, meaning that each certificate is given a unique number, starting at 1. For our Canadian customers, this coin is GST/HST exempt. The coin features a re-creation of the stylized Arms of Canada designed by G. Kruger-Gray, as it appeared on Canadas 50-cent coin in 1943. At the center is the Shield, with the royal symbols of Great Britain and France in the upper quadrants: three lions (England), one lion within a double tressure (Scotland), the harp of Tara (Ireland), and three fleur-de-lis (France). In the bottom portion of the Shield, a sprig of three maple leaves represents Canadians of all origins. Two Supporters hold the Shield: on the viewers left, a lion holds a lance with the Union Jack; on the right, a unicorn holds the royal flag of France.

Above the Shield is an enlarged version of the Royal Crown, which reflects the monarchy of Canada. Both the rim and the arms are gold-plated, which strikes an elegant contrast between the gleam of gold and the silver shine of the mirror-like background. The selective gold plating continues on the obverse, which features the effigy of George VI by Sir T. Beautifully presented in a Royal Canadian Mint branded wooden box, lined with black flocking and including a removable insert and special certificate compartment.

The wood box is protected by a graphic beauty box. Unsearched All of the coins offered in this listing are unsearched. Many coin dealers search all coins when they are received from the Mint. They "cherry-pick" the best coins.

Then submit them to be graded, certified, and slabbed by PCGS, NGC, ANACS, etc. When a dealer searches coins, those that they sell in original Mint packaging are only lesser quality coins. Photos: When a listing offers multiples of the same coin, one coin is picked at random and photographed. Since all coins offered in that listing are essentially identical, the coin photographed is representative of all coins offered. These photos were taken through the plastic cling film that protects the coins; any dust, etc.

On the outside surface of the capsules doesnt affect the coins. Surface areas that appear black on some proof coin photos are actually highly polished, mirror-bright metal reflecting the color of the camera. We place the coin at an angle, in some photos, to better depict the mirror bright finishes. However, angling the coin usually results in one side of the coin being slightly out of focus.

Whenever possible, we use actual photos of our coins, rather than just artists conception drawings from the Mint. We frequently update and upgrade the photos that appear with our listings, using improved cameras and lenses and better lighting. We will honor your requests for additional photos as quickly as our schedule permits. The item "Canada 2018 EXCLUSIVE Masters Club 2 Troy oz.