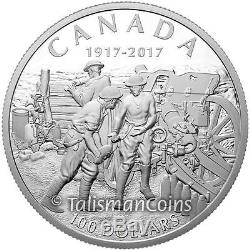 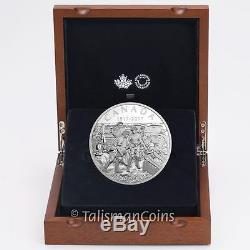 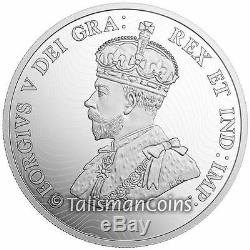 MINTAGE ONLY 750 - TRULY RARE! Vimy Ridge: a defining moment for Canada, and a watchword in the Canadian lexicon. For the first time in history, all four divisions of the Canadian Corps came together during World War I. And fought side-by-side as one, giving way to a surging sense of national identity on the battlefield as well as at home. This ultra low mintage (just 750), huge 10 troy ounce pure silver. Proof commemorates the centennial of a pivotal chapter in Canadas history, the Battle of Vimy Ridge, through this reproduction of a battle painting by Canadas first official war artist. A Dramatic Design by Canada's First Official War Artist! This magnificent design presents a highly detailed, magnificently engraved recreation of the large-sized oil painting. The Taking of Vimy Ridge, Easter Monday, 1917. The coins large diameter (76 mm - 3 inches) is the perfect canvas for such a detailed reproduction of this unforgettable work by Canadas first official war artist, Richard Jack. By focusing on a Canadian artillery battery, the design captures the intensity of the heavy shelling directed towards enemy positions on Vimy Ridge, which forms the raised horizon in the background. The crew of the 18-pounder field gun work tirelessly and in unison as they pass shells to keep up the barrage - a fitting depiction of Canadas troops coming together to fight as one. The reverse features the effigy of the wartime monarch, King George V. MacKennal, as used on Canadian coins in the First World War period.

The use of multiple finishing techniques creates a true sense of both depth and activity, and brings to light even the smallest engraved detail! Of Destruction - World War I. The Royal Canadian Mint refines the purest silver in the world.

The RCM is also the only mint in the world to issue commemorative coins in a. This 10 troy ounce silver proof is 99.99% pure! The denomination is also indicated. A frosted cameo portrait of the wartime monarch, His Majesty, King George V. This portrait was executed by the artist, sculptor and designer Sir E.

The legend GEORGIVS V DEI GRA: REX ET IND: IMP: (George V, King and Emperor of India by the Grace of God) replicates the design of the original coinage of the era. The coin is encapsulated and luxuriously presented inside a solid wood casket or coffer, lined with black velvet and protected by a black outer box. An individually-numbered certificate of authenticity is included. "The War to End All Wars" & the Technology of Death.

In President Woodrow Wilson's famous words, the First World War. Was "the war to end all wars, " or such was the hope of a ravaged Europe in 1918. Never before in human history had science and technology been harnessed to such an extent in the service of Death. Never before had war been waged simultaneously in the skies, on the earth, and below the waves.

Never before had the world seen the ruinous destruction wrought by airplanes, tanks and submarines. Never before had it witnessed the desolation of trench warfare - the deafening artillery fire, sweeping machine guns mowing down rows of soldiers, and lethal poison gases.

Over 65 million soldiers from around the world served their countries in battle. Historians estimate that up to 10 million lost their lives, while 20 million others were wounded. Today, as the world pays tribute to the last surviving veterans of this terrible conflict, these significant coins will forever honor the legacy of all who fought for freedom.

Talisman World Coins and Medals has been in business for more than 28 years and is one of the largest world coin direct distributors and wholesalers in the world. The item "Canada 2017 World War I 1917 Battle of Vimy Ridge 10th $100 10 Oz Silver Proof" is in sale since Sunday, March 12, 2017.