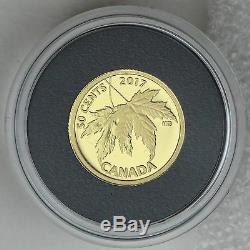 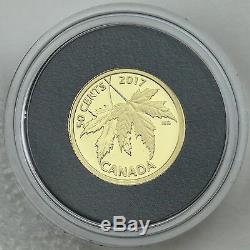 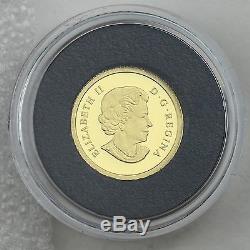 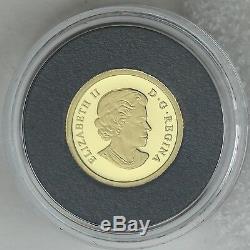 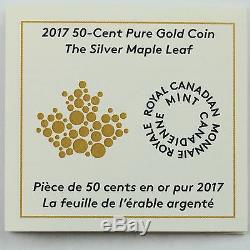 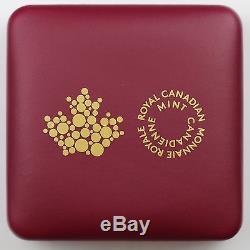 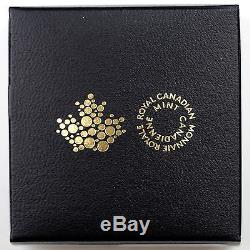 2017 The Silver Maple Leaf: 1/25 oz. Pure Gold Proof 50-cents Coin. All coins offered in this listing are unsearched! All of our Canadian coins are stored in a climate controlled, smoke-free vault. All of our Canadian coins are acquired directly from the Royal Canadian Mint - We do not sell'second-hand' coins from unreliable and potentially fraudulent/counterfeit sources. Composition 99.99% pure gold. Certificate serial numbered (serial numbers will vary). Face value 50-cents (a legal tender Canadian coin).

Artists Margaret Best (reverse), T. Beautifully diverse, Canada's native maple trees inspire reverence wherever they're found! Each species is typically identifiable by the shape of its foliageparticularly the deeply cut "V" sinuses that define the leaf of a silver maple. Stately and elegant, this fast-growing tree can grow up to 35 meters tall in moist soils, such as those that line the waterways of Eastern Canada.

It's aptly named for the leaf's striking silvery-white underside, which seemingly shimmers on this exquisite gold coin! A more affordable gold coin to add to or start a gold coin collection!

LOW MINTAGE: A maximum of only 8,000 coins will be made available worldwide! INCLUDES SERIALIZED CERTIFICATE: The Royal Canadian Mint certifies all of its collector coins. Most of these are serialized certifications, meaning that each certificate is given a unique number, starting at 1. For our Canadian customers, this coin is GST/HST exempt! Designed by Canadian artist Margaret Best, the coin captures the lifelike beauty of an iconic Canadian maple by bringing together not one but two silver maple leaves.

Both are depicted in a downward position, as they often appear naturally when attached to a branch. The view of the leaf's upper surface (foreground, right) dominates the field; slightly curling at the tips, it bears the deeply veined pattern that produces an intricate, almost lace-like appearance. The crossover of the two stalks adds a sense of layering as the focus transitions to the second leaf (left), which presents its silvery underside. Where the veins are sunken on the first leaf, they are raised and prominent on the secondanother example of the characteristic differences between a leaf's two sides, which are further enhanced by the use of matte and polish finishes that recreate the striking visual contrast between the two.

Each coin is encapsulated and presented in a Royal Canadian Mint-branded maroon clamshell protected by a black beauty box. Unsearched All of the coins offered in this listing are unsearched. Many coin dealers search all coins when they are received from the Mint. They "cherry-pick" the best coins. Then submit them to be graded, certified, and slabbed by PCGS, NGC, ANACS, etc. When a dealer searches coins, those that they sell in original Mint packaging are only lesser quality coins. Photos: When a listing offers multiples of the same coin, one coin is picked at random and photographed. Since all coins offered in that listing are essentially identical, the coin photographed is representative of all coins offered. Surface areas that appear black on some proof coin photos are actually highly polished, mirror-bright metal reflecting the color of the camera. We often include proof coin photos with the coin slightly tilted to better depict the mirror bright surfaces. However, tilting the coin may resulting one side being slightly out of focus. Whenever possible, we use actual photos of our coins, rather than just stock artwork from the Mint. We frequently update and upgrade the photos that appear with our listings, using improved cameras and lenses and better lighting. We will honor your requests for additional photos as quickly as our schedule permits. The item "Canada 2017 The Silver Maple Leaf 1/25 oz. Pure Gold 50-cents Proof Coin" is in sale since Friday, March 24, 2017. This item is in the category "Coins & Paper Money\Coins\ Canada\Commemorative". The seller is "okranchlandandcattlecompany" and is located in Lewisville, Texas.