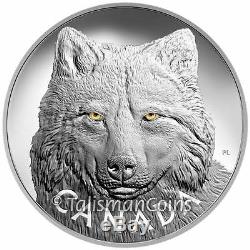 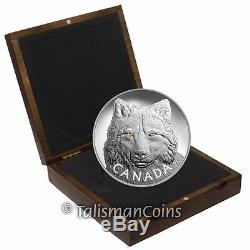 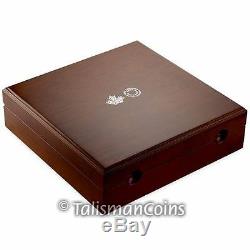 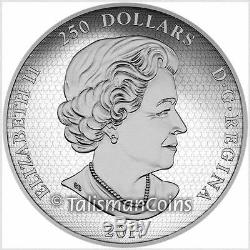 Stare into the reflective eyes of the Timber Wolf, the powerful predator of North America. TRULY HUGE pure silver kilogram! This beauty is TRULY RARE, too, featuring gold and black.

Enamel eyes on the wolf, and a MINTAGE OF ONLY 400! What a tremendous, striking design! That's just the start of what we can say about this huge silver beauty! The most striking feature of many animals is their eyes, and the Timber Wolf.

Equipped with superior peripheral and night vision, the timber wolf. Surveys the wilds of western Canada with an unforgettable intensity in its gaze, which only adds to its mysterious allure. The timber wolf is one of North America's most elusive, powerful yet social predators. Hold the haunting gaze of the legendary timber wolf in the palm of your hand and be transfixed! Design, engraving and translucent enamel.

Intersect to stunning effect in this hanunting portrait by Canadian artist Pierre Leduc. The wolf's dense fur is engraved in the finest detail, while the elegant animals intense stare is enhanced by black and gold enamel.

This is the fourth coin in the Royal Canadian Mints annual series featuring enamel-enhanced portraits of beloved Canadian wildlife species. This meticulously detailed portrait by Canadian wildlife. Artist Pierre Leduc presents a timber wolf. , also known as the Mackenzie Valley wolf. A close view of the wolfs facial features dominates the scene, where the application of gold-toned enamel immediately pulls the viewing towards its unforgettable stare.

Irises and black pupils add a glowing intensity to the realistic portrayal. Breaking free from this locked gaze, a study of the wolfs other facial features shows an outstanding amount of detail. Advanced finishing and shading techniques enhance the intricate engraving and provide a breathtaking sense of depth, texture and contrast to the wolfs ears, nose, mouth and fur.

Timber Wolf One Kilogram Silver Proof. Is the fourth in this extremely desirable series celebrating the striking eyes of Canadian wildlife. Wolves on coins are always popular. With a mintage limit of just 400. It's a true thrill to wildlife.

Lovers when they catch a glimpse of the mythic wolf in the wild! Although they were held in high esteem for eons by Native Americans. Because of their spirits, wolves have been eradicated throughout most their range in North America, partly by hunters for trophies, and partly by ranchers as pests. However, wolves have been making a comeback recently and have been reintroduced to several locations, including national parks. Play an important role by preying on big game animals and helping to control their population, including eliminating aged and diseased animals.

Though they hunt in packs, wolves do not view humans as prey. The largest member of the canine family, the Grey Wolf. Varies in color from grizzled gray or black to pure white. This animal tends to live, travel and hunt in a pack, which usually includes the alpha mother and father, their pups and several younger animals. Grey Wolves develop close relationships and strong social bonds.

They often demonstrate deep affection for other members of their pack, and may even sacrifice themselves to protect the family unit! Considering this Proof Silver Kilo. It's kind of hard to go wrong. Among the lowest ever for a Royal.

And all kilo collectors need this coin! Tremendous size - 1000 grams (1 kilogram)! Tremendous design, highlighted by vibrant, colorful enamel. The meticulous detailing and incredible design one expects from the artistic engravers at the Royal Canadian Mint!

Struck in high, medallic relief. With tremendous depth of field for a dramatic and powerful portrait! From a numismatic point of view - this bright-eyed Timber Wolf.

Will be the centerpiece of your collection! The Royal Canadian Mint refines the purest silver in the world. The RCM is also the only mint in the world to issue commemorative coins in a. This one kilogram silver proof. , also known as the Mackenzie Valley wolf, struck in ultra high, medallic relief. With vibrant black and gold enamel. Eyes There are no legends other than the country name CANADA on the obverse to detract from the power and the beauty of the dramatic design.

Her Majesty, Queen Elizabeth II. This portrait, the fourth effigy of the queen to appear on Canadian Coinage, was executed by the artist Susanna Blunt. The legend ELIZABETH II D. REGINA ("Elizabeth II, Queen by the Grace of God"), the date of issue and the denomination also appear. The coin is encapsulated and presented inside a solid maple wood casket or coffer, lined with black velvet and protected by a black outer box.

An individually-numbered certificate of authenticity is included. 102.10 mm (4 inches). The item "Canada 2017 Enamel Eyes Timber Wolf $250 1 Kilogram Silver Kilo MINTAGE 400" is in sale since Tuesday, February 7, 2017. This item is in the category "Coins & Paper Money\Coins\ Canada\Commemorative". The seller is "talismancoins" and is located in Saint Louis, Missouri. This item can be shipped worldwide.