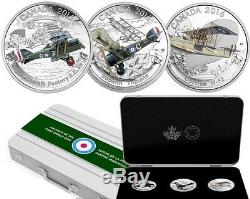 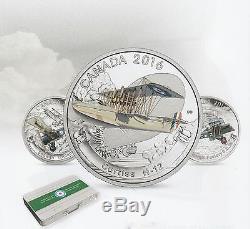 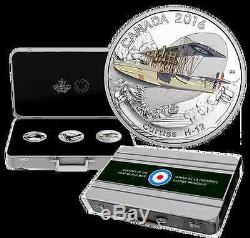 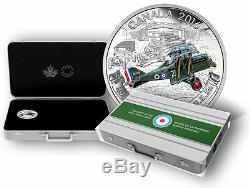 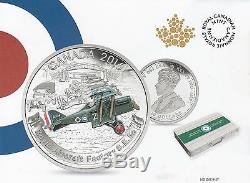 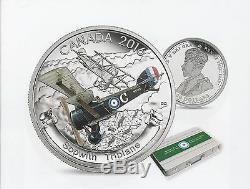 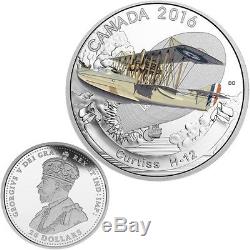 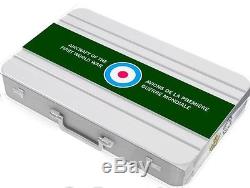 A Great WW1 Themed Collector's Series & Airplane Enthusiasts Must Have! Packed & Ready For YOUR Enjoyment! Aircraft technology was barely a decade old when the First World War began in 1914, but the needs of warfare quickly fuelled incredible advancements in aviation. This fine silver coin pays tribute to the aerobatic Sopwith Triplane, and the Canadians who famously piloted it over the Western Front between May and August 1917. Second coin in an exciting new 3-coin series that shines the spotlight on aircraft flown by Canadian combatants during the First World War!

Painstakingly engraved in stunning detail with selective colour: The reverse offers a faithful depiction of two Sopwith Triplanes, made famous by the all-Canadian Black Flight pilots. Coin is 99.99% fine silver and with a mintage limited to 7,500 coins. Celebrates the daring, pioneering spirit of Canadians who took to the sky and helped steer the course of aviation history! Sure to be treasured by collectors and aviation enthusiasts for its artistic merit and historical theme, this striking coin is also a deeply meaningful gift for those whose loved ones proudly served their country abroad, whether on land or in the air. The reverse design by Canadian artist David A.

Ellis Vair Reid of Belleville, Ont. The Sopwith Triplanes reputation for exceptional manoeuvrability is on display as the Black Maria completes a sharp turn; this allows for a closer view of the planes markings, wing construction, even its.

303-caliber Vickers machine gun atop the fuselage. The parting of the clouds reveals the tragic devastation of the Ypres area below, where there is little left of the village of Passchendaele save for the ruins of its church and the road that curves through the blast-scarred fields. Material: Pure Silver (99.99%). This Aircraft of the First World War coin series concludes with a tribute to the Curtiss Model H-12 flying boat, which was flown by Canadian aircrew serving in the Royal Naval Air Service (RNAS) during their anti-submarine and anti-zeppelin patrols over the North Sea. Third and final coin in an unforgettable 3-coin series that shines the spotlight on aircraft flown by Canadian combatants during the First World War.

Painstakingly engraved in stunning detail and enhanced by the use of selective colour: The reverse presents a historically accurate depiction of a fiery encounter between a Curtiss H-12 and Zeppelin L-22 over the North Sea. Oram features an engraved rendering of the fateful encounter on May 14, 1917, between a Curtiss H-12 (foreground) and the Zeppelin L-22 (background). Heavy cloud cover is evident in the engraved background, where a break in the clouds reveals the North Sea below. In the foreground, selective colour recreates the light colours of the H-12 piloted by Flight Sub-Lieutenant (later Air Marshal) Robert Leckie of Toronto, with an attention to detail that is made evident by the inclusion of the identifying number 8666 and the blue, white and red stripes and roundels used by the Royal Naval Air Service. The detailed engraving only adds to this, recreating the smooth lines of the H-12s laminated wood veneer hull and sponsons, all while capturing the finer details on the wings and the twin mounted engines in the interplane gap.

The engraved zeppelin can be seen with its rear exploding into flames, mere moments before the L-22 becomes the first zeppelin shot down by a flying boat. These Charges are the Buyers responsibility. The item "Canada 2016 World War I Aircraft WWI 3 Coin $20 Silver Proof Set in Metal Case" is in sale since Monday, April 16, 2018. This item is in the category "Coins & Paper Money\Coins\ Canada\Commemorative".

The seller is "shockwaves-the3cccs" and is located in Oshawa, Ontario. This item can be shipped worldwide.