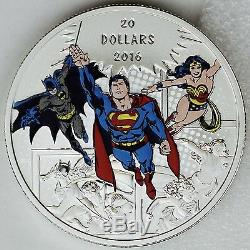 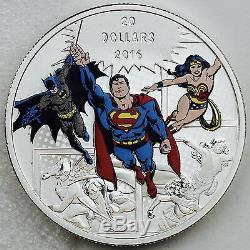 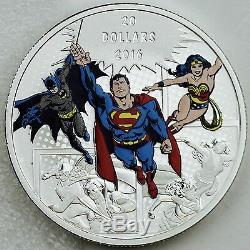 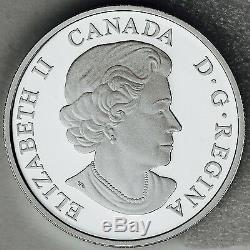 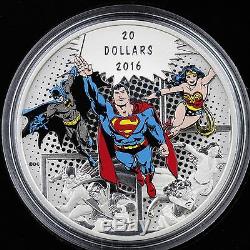 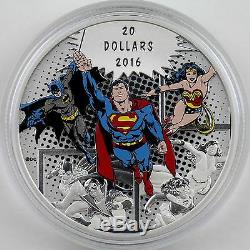 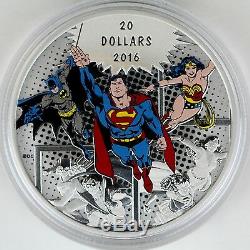 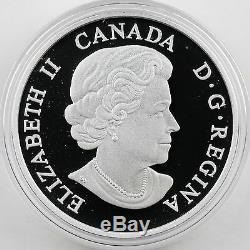 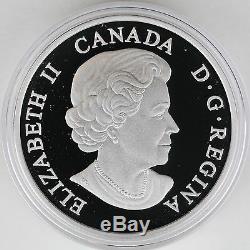 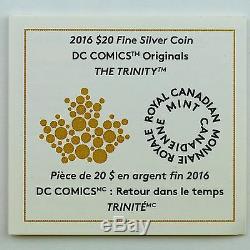 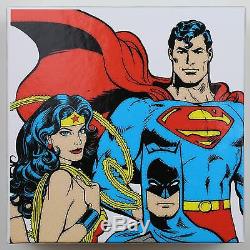 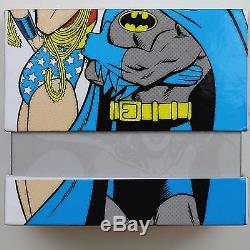 Canada 2016 DC Comics Originals: The Trinity 99.99% Pure Silver Color Proof. All coins offered in this listing are unsearched! All of our Canadian coins are acquired directly from the Royal Canadian Mint - The counterfeiting of numismatic coins, and the sale of stolen coins, are serious problems for coin collectors and dealers.

Unlike many other coin dealers. To protect against these risks, we do not sell'second-hand' coins. All of our Canadian coins are stored in a climate controlled, smoke-free vault. Composition - 99.99% pure silver. Weight (g) - 31.39 (one troy ounce).

The DC Comics Originals series has a classic, slightly retro style, recalling the look most comic book fans grew up with and remember fondly. Basing itself on the DC COMICS style of the 1980s, this series celebrates one of the most established looks for the DC COMICS pantheon of SUPER HEROES including the seven brought together on this stunning coin's reverse. Makes a wonderful gift and treasured keepsake for any fan of comic books, DC COMICS and timeless SUPER HEROES! Rich color recreates the iconic costumes of The Trinity: the blue, grey, black, and yellow of Batman's costume as he swings into battle; the bright red, yellow, and blue of Superman's bold S-Shield as he flies through the air; the red, yellow, white, and blue of Wonder Woman's multi-patterned costume with the powerful Lasso of Truth strapped to her belt. Canadian superstar creators Darwyn Cooke, Tom Grummett, Karl Kerschl, and Cameron Stewart have all helped to shape these DC COMICS Universe characters as artists/writers!

INTRICATE ENGRAVING AND GORGEOUS FINISHES! This coin's design brings to life many of your favorite DC COMICS SUPER HEROES all on a single coin crafted in 99.99% pure silver! MADE BY FANS FOR THE FANS! A nod to these classic characters, with all the respect and devotion that only the Royal Canadian Mint can provide! ONE OUNCE OF 99.99% PURE SILVER COIN!

For our Canadian customers, this coin is GST/HST exempt! This coin design features a mosaic of some of the greatest SUPER HEROES in the DC UNIVERSE, all in classic action poses. In the foreground, rich color recreates the iconic costumes of The Trinity: the blue, grey, black, and yellow of Batman's costume as he swings into battle; the bright red, yellow, and blue of Superman's bold S-Shield as he flies through the air; the red, yellow, white, and blue of Wonder Woman's multi-patterned costume with the powerful Lasso of Truth strapped to her belt. Behind them are the engraved depictions of the next generation of DC COMICS SUPER HEROES BATGIRL, NIGHTWING, SUPERGIRL, and WONDER GIRL who are always eager to join the fight.

This dynamic group shot is engraved over a laser halftone pattern that adds a modern graphic element to the design, while completing the coin's classic comic book look and feel. The DYNAMIC DUO of BATMAN and ROBIN has existed for almost as long as BATMAN himself, with ROBIN making his first appearance in 1940. Having outgrown his BOY WONDER identity, Dick Grayson opted to strike out on his own and became NIGHTWING. WONDER GIRL and ROBIN are founding members of the SUPER HERO teen group, the TEEN TITANS.

Each coin is encapsulated and presented in a Royal Canadian Mint-branded premium graphic case. Unsearched All of the coins offered in this listing are unsearched. Many coin dealers search all coins when they are received from the Mint.

We will honor your requests for additional photos as quickly as our schedule permits. The item "Canada 2016 DC Comics Originals The Trinity 99.99% Pure Silver Color Proof" is in sale since Sunday, October 9, 2016. This item is in the category "Coins & Paper Money\Coins\ Canada\Commemorative".