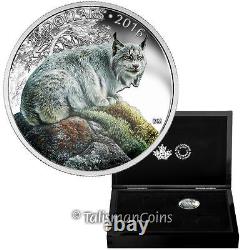 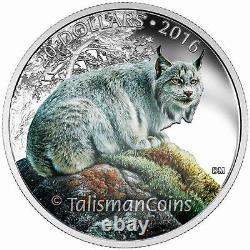 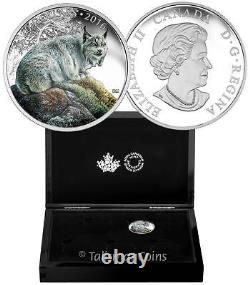 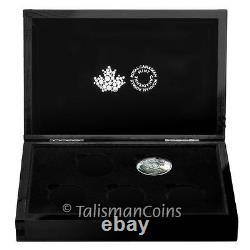 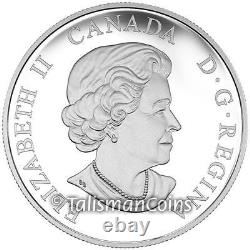 This listing is for the Commanding Canadian Lynx Silver Proof. Silver Proof may also be available in the.

Get the eleventh in the Iconic Canadian Animals series, the. Fierce and deadly feline hunter. This masterwork of wildlife fine art by Canadian wildlife artist Denis Mayer Jr. Depicts a beautiful snowy owl after the first snow, in pure silver with proof finish and vibrant, full color! In 5-coin custom presentation case box.

Eleventh in this extremely popular series. Tremendous investment potential here, as well as the meticulous, traditional engraving. Extraordinary applied technology for which the Royal Canadian Mint is known world-wide! Proof, minted on a full one troy ounce planchet of 99.99% pure silver.

(the purest on the planet)! Better yet, it's an original work of art by wildlife artist Denis Mayer Jr. A true investment piece for the discriminating animal lover, cat fancier, savvy numismatic investor and/or wildlife. ¡ Extremely low mintage of just 6,500 - get it quick!

At home in the boreal forests that stretch across much of Canada, the Canadian lynx. Commands attention with its beautiful features and secretive feline ways. This wildcat is a skilled hunter that easily adapts to the changing seasons - an admirable trait that makes it one of Canada's most beloved and iconic species, as celebrated in this superb, pure silver coin. Highly Detailed, Original Work of Art. The intricate design by Canadian wildlife. To highlight the life-like, engraved depiction of a Canadian lynx. Deep within the boreal forest that is its home. With its head turned to the side, the lynx remains calm and composed as it crouches low on its perch atop a rocky outcrop, which provides it with a higher view of the area below. Selective color highlights the meticulously engraved portrait of this wild felid, capturing it in exquisite detail, from the varying tones of its thick fur to the beard-like ruff on both sides of its face and its black-tinged ear tufts. The moss and grasses at its broad feet add a fresh tinge of green and brown hues that contrast beautifully with the pale lynx. All against the engraved forest that looms in the background. The Canadian Lynx - "Grey Ghost" of the North! The shy and reclusive Canada Lynx.

Is often called the gray ghost of the North. The Lynx is sometimes confused with the bobcat. But when one knows the differences, distinguishing between the two is easy.

With its long, thick fur, prominent cheek ruffs, a short, black-tipped tail and oversize paws, it is perfectly adapted for winter. And its distinctive ear tufts amplify sound to make it a formidable hunter. It is also larger than a bobcat. And over twice the size of a large domestic cat. Is a solitary and secretive crepuscular animal, mostly active in the early morning and at dusk.

Lynx tend to sleep during the day and are moderately active at night. Although solitary, at times small groups may be observed traveling together. The lynx roam about one and a half to three miles each day, and thus require a large territory. When food becomes scarce, the lynx territory will increase; most of the population will roam far, with a select few staying behind in their original territory. The cat tends to stay within 100 yards of the tree line, but does not shy away from swimming.

One account records a lynx swimming two miles across the extremely cold Yukon River. Can be found in Canada's boreal forests from Newfoundland to the Yukon Territories, as well as in the northern tier of the United States. It hunts squirrels, grouse and deer, but its preference by far is the snowshoe hare. In fact, the populations of these two animals are inextricably linked. As long as 200 years ago, the Hudson Bay Company began noting how a rise in lynx led to a drop in hares, and how fewer hare led to fewer lynx.

Back then, the lynx population would peak at 70 times its low. Today, development, forestry and hunting have brought peak lynx numbers down to six times the low.

The RCM is also the only mint in the world to issue commemorative coins in a. This one troy ounce silver proof coin is 99.99% pure! Uses selective color to highlight the engraved depiction of a Canadian lynx.

In its natural setting, rendered in exquisite detail through expert engraving and full color. The date and denomination are also indicated. Her Majesty, Queen Elizabeth II. This portrait, the fourth effigy of the queen to appear on Canadian Coinage, was executed by the artist Susanna Blunt. The legend ELIZABETH II D. REGINA ("Elizabeth II, Queen by the Grace of God") also appears. The coin is encapsulated inside a handsome, custom presentation case, lined with black velvet and protected by an outer box. An individually-numbered certificate of authenticity is included. This item is in the category "Coins & Paper Money\Coins: Canada\Commemorative". The seller is "talismancoins" and is located in this country: US. This item can be shipped worldwide.