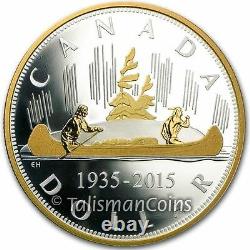 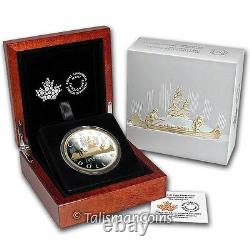 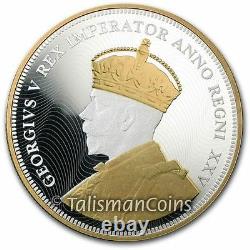 This listing is for the coin with serial number 0022! Get this stunning, ultra-low mintage (2,200) two troy ounce pure silver dollar, with the historic Voyageurs design highlighted in 24-karat gold plating, now! This Masters Club exclusive is the very first in the new Renewed Silver Dollar Series, and the very first 2 oz silver dollar in Canadian history! A nations character and spirit are often revealed in the designs of its circulation coins. For Canada, no other coin has done this more profoundly than the Voyageur.

This storied design was introduced in 1935, to mark the occasion of King George V's. Silver jubilee, and then entered into numismatic history.

The Renewed Silver Dollar Series. Gets started with a tremendous bang, with this Masters Club exclusive - the very first 2 oz silver dollar. It's also among the lowest mintage silver dollars ever issued!

On both sides of its beloved motifs, and housed in a luxurious, solid wood presentation case of the highest quality, we believe that this numismatic delicacy will be a rarity that continues to appreciate as the years slip downstream, not unlike the voyageurs on this famed design. Please read the articles below about the original, 1935 silver dollar, and the inspiration for its design, the famed voyageurs. Two troy ounce, retro design pure silver dollar. With its excruciatingly low mintage of just 2,200! Canadas first circulating silver dollar was introduced in 1935 to mark the Silver Jubilee celebrations for King George V.

Its design featured a voyageur and Native American. Paddling a canoe in tribute to the fur trade, the industry that founded the nation. The image of a vast untamed frontier it conveyed made it one of the most popular coin designs ever to enter circulation in Canada. The scene is illuminated from behind by the Northern Lights (Aurora Borealis), which speak to the natural wonders.

And grandeur of the vast country. The voyageur silver dollar was designed by renowned Toronto sculptor Emanuel Hahn, making it one of Canadas first domestically-designed coins and a great source of pride. Even though the Royal Canadian Mint had begun striking Canadas coins in 1908, the designs, tools and dies were still being produced by the Royal Mint in England. This was the case for the coins that were already in circulation when the voyageur silver dollar was introduced. While they were engraved by European sculptors, the presence of maple leaves in their designs hinted at an ever-expanding national identity for a young Canada.

In 1935, the voyageur silver dollar brought the essence of the nations character to the forefront. It evoked the spirit of adventure that first lured explorers and voyageurs across the continent - an epic ideal that continues to inspire centuries later. The detail of the engraving is such that the letters HB for Hudson Bay Company can be seen on one of the trade bundles.

Canada's early history is one of exploration and discovery. Throughout North America the fur traders French. Who opened up the wilderness on the highways of water did more than just trap animals and sell their hides.

They met with the Native Americans. Learned their languages and ways, and created maps where once there was just blank space on a map.

The lure of wealth transcended class and social status as hundreds of men climbed aboard their canoes to head into the unknown for months, sometimes even years. Paddling up to 90 strokes per minute, they traveled thousands of miles, circumventing perilous rapids by loading each man with 200 lbs of cargo to carry across countless portages. Bear fat, corn, and pemmican were their staples and they had little more than the trees to shield them from the elements and the unrelenting flies. This is the first and only two troy ounce silver dollar (Voyageurs or otherwise) in Canadian history! We can not stress strongly enough what an opportunity this is! We believe that this landmark coin will become a numismatic delicacy, greedily pursued by future generations! All silver dollar collectors need this coin. At only 2,200, the mintage limit is tiny, so grab yours now!

This two troy ounce silver coin is 99.99% pure! The classic Voyageur design in stunning, frosted cameo relief and highlighted in 24-karat gold plating! A French fur trader Voyageur. (Indian) paddle their canoe laden with trade goods past a small island with stylized pine or evergreen trees. The detail is such that the letters HB for Hudson Bay Company can be seen on one of the trade bundles.

In the background, the Northern Lights (Aurora Borealis) illuminate the scene. A frosted cameo portrait of His Majesty, King George V. This portrait was executed by the artist, sculptor and designer Percy Metcalfe. The legend GEORGIVS V REX IMPERATOR ANNO REGNI XXV (George V, King and Emperor, 25th Year of Reign) marks the anniversary of the original, 1935 Voyageurs dollar. The coin is encapsulated and presented inside a luxurious, Royal Canadian Mint-branded solid wood box, lined with black velvet and including a removable insert and special certificate compartment, protected by a full color outer box. An individually-numbered certificate of authenticity is included. Proof with 24--Karat Gold Plating. Obverse: Emanuel Hahn Reverse: Percy Metcalfe.