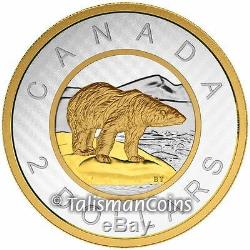 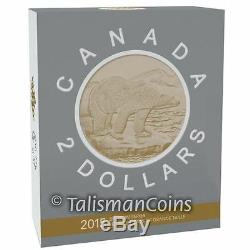 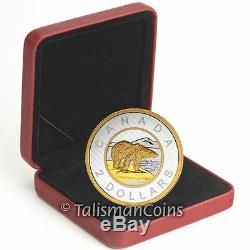 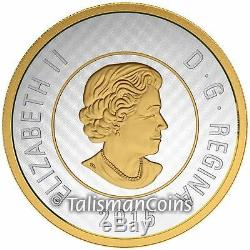 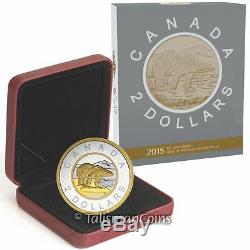 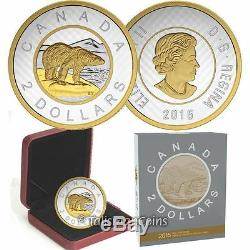 The RCM saved the best for last - get the sixth and final entry. Get all six circulating Canadian denominations, minted in five troy ounces of pure silver with proof finish and 24-karat gold plating.

This twonie has an exceptionally low mintage, too - only 1,500! The Royal Canadian Mint strikes again! Now we're livin' large! Here's your unique opportunity to acquire each of the current six circulating denominations of Canadian coinage - except blown up to monster size! Celebrate the history and artistry of Canadian circulation coinage, in a larger version - the better to enjoy these storied designs in all their glory!

Each beautiful proof is minted in five troy ounces. Of pure silver and features selective 24-karat gold plating on both the obverse and reverse!

We can not stress strongly enough what an opportunity this is! This landmark coin is already becoming a numismatic delicacy, greedily pursued by future generations! The mintage limit is low, so grab yours now!

The Beloved Bi-Metallic Polar Bear Toonie. The Canadian two dollar coin, commonly referred to as the "toonie" or "twonie", was introduced on February 19, 1996 by Public Works minister Diane Marleau.

The toonie is a bi-metallic coin sporting an scene of a large, adult polar bear. Standing on an ice floe, gazing out over the early summer Arctic. Landscape, by artist Brent Townsend.

The name "toonie" became so widely accepted that in 2006 the Royal Canadian Mint secured the rights to it! A competition to name the polar bear. Resulted in the name "Churchill", a reference both to Winston Churchill and to the common polar bear sightings near Churchill, Manitoba. The coin is manufactured using a patented and distinctive bi-metallic coin locking mechanism.

The coins are estimated to last at least 20 years in circulation. The discontinued two-dollar bank note was less expensive to manufacture, but on average each bill lasted only one year.

Here's a coin with a ton of investment potential, to say nothing of cachet! It's huge (nearly 3 inches in diameter) and stuck in the purest silver. Refined anywhere in the world. The numismatic circulating coin theme is extremely popular, too!

This five troy ounce silver coin. An artistic, realistic and minutely detailed portrait of a polar bear. The date of issue and denomination also appear. Her Majesty, Queen Elizabeth II. This portrait, the fourth effigy of the queen to appear on Canadian Coinage, was executed by the artist Susanna Blunt. The legend reads ELIZABETH II D. REGINA ("Elizabeth II, Queen by the Grace of God"). The coin is encapsulated inside a burgundy leatherette, clamshell-style presentation case, lined with black velvet and protected by a full color, custom cardboard box. An individually-numbered certificate of authenticity is included. Proof with 24-Karat Gold Plating. The item "Canada 2015 Big Coins Series Polar Bear $2 Toonie 5 Oz Silver Gold Plated Proof" is in sale since Friday, September 4, 2015. This item is in the category "Coins & Paper Money\Coins\ Canada\Commemorative". The seller is "talismancoins" and is located in Saint Louis, Missouri. This item can be shipped worldwide.