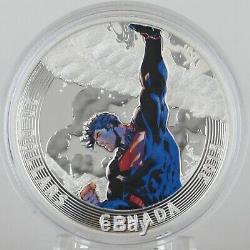 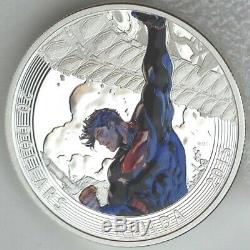 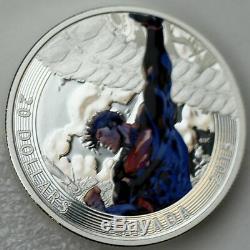 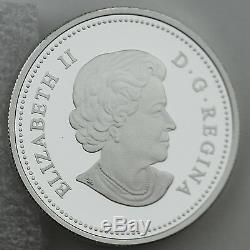 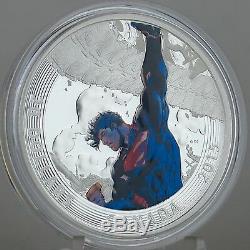 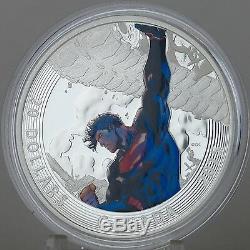 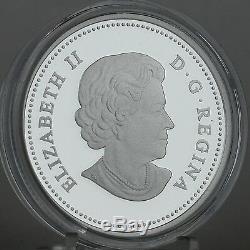 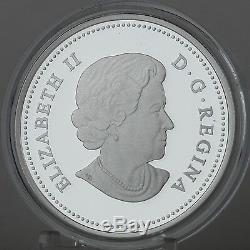 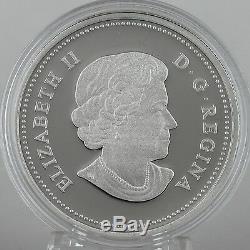 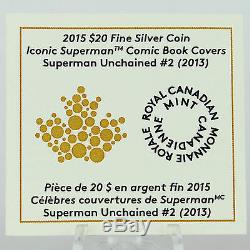 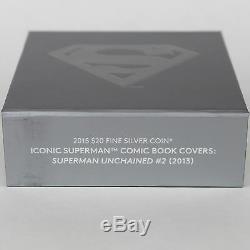 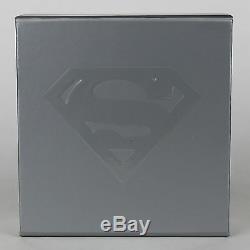 All of our Canadian coins are acquired directly from the Royal Canadian Mint - We do not sell'second-hand' coins from unreliable and potentially fraudulent/counterfeit sources. Composition - 99.99% pure silver. Finish - proof with Color. Weight (g) - 31.39 1 troy oz.

It features six variant covers, one of which has been painstakingly reproduced on this coin, to give the impression that Superman is lifting the tank right off the coin! Continuing from the first issue, Superman manages to save a collapsing building in Dubai; it seems this was masterminded by a terrorist group called the Ascension, which Batman later asserts is waging war on the modern world. But there's more trouble on the horizon: Batman believes there is a new being whose physiology resembles Superman's, but whose powers may in fact be more powerful. While Lois Lane chases down a lead on the Ascension in Nova Scotia, Superman heads for the Salt Flats to confront General Sam Lane. He soon finds himself surrounded by powerful, advanced weaponry. Suddenly, General Lane's own mysterious weapon - the super-being Wraith - rises up to protect a weakened Superman and insists that he has been waiting a long time to confront Superman.

With all of this unfolding, it's not surprising that The Man of Steel is unaware that Lex Luthor has escaped from prison and intends to save the world! This comic book issue was written and pencilled by two of the biggest names in DC Comics.

Not only does Superman use most of his powers in this issue, he also shows how proficient he has become in their use, deploying them in a creative and intelligent manner. In this issue, Batman makes an appearance to add his perspective on Superman's current situation, as the Man of Steel deals with a new foe who may possess strength that exceeds his own. The perfect coin to start your child's or grandchild's love of coin collecting! Superman is a towering symbol of strength in this recreation of one of the covers of Superman Unchained #2 , which was issued in 2013. Advanced engraving techniques are used to frame the image within a series of concentric circles to create added depth and motion to the design.

Brilliant color infuses the reverse with energy while replicating the look and feel of the original artwork. For our Canadian customers, these coins are GST/HST exempt! As seen on one of the six variant covers associated with Superman Unchained #2 (2013), the reverse image features vibrant color in its depiction of Superman in action. Battling a corrupt and covert military force, Superman displays an incredible feat of strength as he lifts a tank over his head with just one arm. In the engraved background, high-tech tanks close in on the Man of Steel, leaving a wake of destruction and rubble in their path.

Surrounding the reverse image, a series of concentric circles add depth to the design, creating the illusion that Superman is poised to leap out of the coin. Each coin is encapsulated and presented in a Royal Canadian Mint-branded custom paperboard box. Check out my other items.

Be sure to add me to your favorites list. Unsearched All of the coins offered in this listing are unsearched. Many coin dealers search all coins when they are received from the Mint. They "cherry-pick" the best coins.

Then submit them to be graded, certified, and slabbed by PCGS, NGC, ANACS, etc. When a dealer searches coins, those that they sell in original Mint packaging are only lesser quality coins. Photos: When a listing offers multiples of the same coin, one coin is picked at random and photographed. Since all coins offered in that listing are essentially identical, the coin photographed is representative of all coins offered. Surface areas that appear black on some proof coin photos are actually highly polished, mirror-bright metal reflecting the color of the camera.