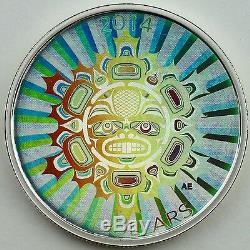 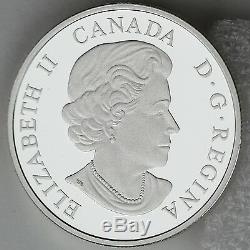 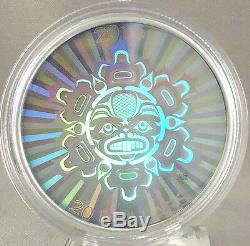 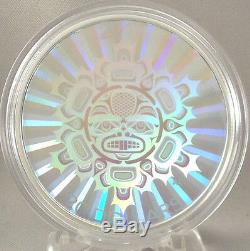 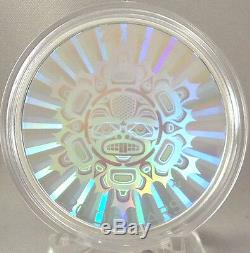 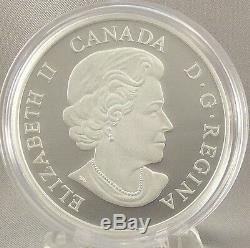 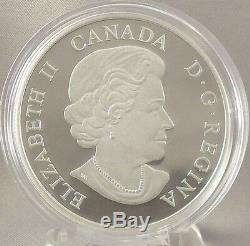 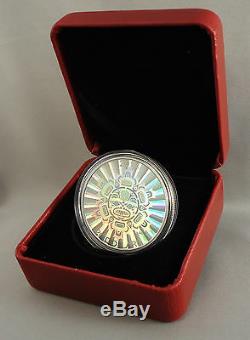 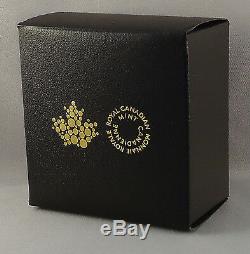 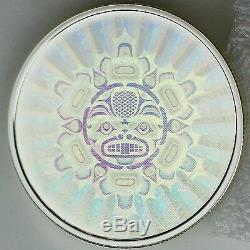 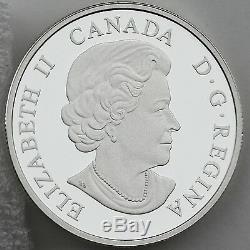 To protect against these risks, we do not sell'second-hand' coins. All of our Canadian coins are stored in a climate controlled, smoke-free vault. Composition - 99.99% pure silver. Weight (g) 31.39 (one troy ounce).

With this coin, the Royal Canadian Mint launches a new series of 1-ounce silver hologram coins that celebrate this interconnectedness through the stunning artwork of West Coast artist Andy Everson. A beautiful gift for someone who enjoys First Nations art!

This 1-ounce 99.99% pure silver coin is the first issue in the Royal Canadian Mint's unique 3-coin hologram series featuring the striking artwork of celebrated Canadian artist Andy Everson. This series celebrates interconnections within the natural world, between Canadians and their landscape, and among Canada's multicultural people. The first release, dedicated to the theme of Land, adopts a beaver as its central motif while ingeniously incorporating Canada's four seasons. In keeping with the theme, each element of the design blends into the next. The coin's hologram treatment perfectly highlights this sense of connection and transition.

The entire reverse side of this stunning Royal Canadian Mint coin is struck as a hologram. The dynamic design uses rainbow-colored transitional images atop duo-tone rays to bring motion and light to the beautifully designed reverse image. A K'ómoks First Nation drummer, ceremonial dancer, and artist, Andy Everson is an innovative artist whose arresting images blend traditional, modern, and even pop culture motifs. With a limited mintage of only 7,500, this coin is sure to be sought after by collectors. An exceptional gift and distinguished collectible for those who love fine art, unique coins, First Nations themes, and Canadiana.

For our Canadian customers, this coin is GST/HST exempt! The reverse image by Canadian artist Andy Everson presents the theme of Land.

Its central motif is a beaver, stylized in the tradition of Everson's K'ómoks and Kwakwaka'wakw ancestors. This image is framed by six maple leaves which, individually, represent autumn. Together, the six leaves form a winter snowflake.

The negative spaces between the leaves are the raindrops of spring. Rays emanating from this central image represent the sunshine of summer. The entire reverse is a full-color hologram, lending movement and light to this highly symbolic image.

The Interconnections series celebrates the relationship between Canada's three natural realms: land, sky, and sea. This first release, dedicated to Land, adopts a beaver as its central motif while ingeniously incorporating Canada's four seasons. This central motif is framed within a wreath of six maple leaves. The iconic importance of the maple leaf to Canada is well known, but this image also points specifically to the season of autumn, when maple leaves are at their most colorful. Arranged in a six-point pattern, the leaves also become a winter snowflake.

Nestled between the leaves are six stylized raindrops, celebrating spring. Finally, rays of sunlight emanate from the image, symbolizing summer. Like the seasons themselves, each element of the design blends into the next.

The design's hologram treatment augments this sense of connection and transition. A nod to Canada's pragmatic, hard-working people, the beaver is one of Canada's oldest symbols as well as a key figure in First Nations mythologies. Canada's exploration and settlement by Europeans was also deeply influenced by this unique animal, who drew the earliest fur traders to Canada's eastern shores. It is highly fitting that an artist representative of the traditional guardians of Vancouver Island's eastern Land of Plenty would design a series celebrating the connection between land, sea, air, and the people whose lives overlap within this environment.

Gedzi Everson is a member of British Columbia's K'ómoks First Nation. Through dance, drumming, and art, Everson honors the traditions of his K'ómoks and Kwakwaka'wakw ancestors. He has travelled internationally as a ceremonial dancer, sharing First Nations traditions. It was through ceremonial dance that Everson began his first serious forays into art, designing pieces for potlatches.

Today, he is known for his bold, eye-catching, and thought-provoking designs that often meld traditional motifs with references from popular culture. This coin is encapsulated and presented in a Royal Canadian Mint-branded maroon clam-shell protected by a black beauty box. Check out my other items. Be sure to add me to your favorites list. Unsearched All of the coins offered in this listing are unsearched.

Many coin dealers search all coins when they are received from the Mint. They "cherry-pick" the best coins.

Then submit them to be graded, certified, and slabbed by PCGS, NGC, ANACS, etc. When a dealer searches coins, those that they sell in original Mint packaging are only lesser quality coins.

Photos: When a listing offers multiples of the same coin, one coin is picked at random and photographed. Since all coins offered in that listing are essentially identical, the coin photographed is representative of all coins offered. Surface areas that appear black on some proof coin photos are actually highly polished, mirror-bright metal reflecting the color of the camera.

The item "Canada 2014 $20 Interconnections Land The Beaver 1 oz Pure Silver Hologram Coin" is in sale since Wednesday, September 10, 2014. This item is in the category "Coins & Paper Money\Coins\ Canada\Commemorative". The seller is "okranchlandandcattlecompany" and is located in Lewisville, Texas.