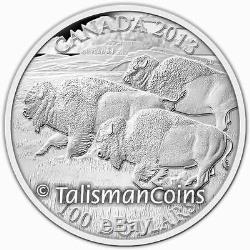 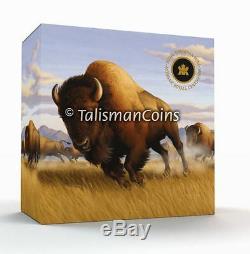 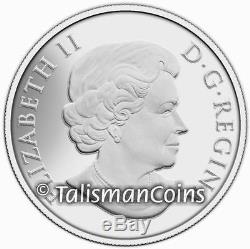 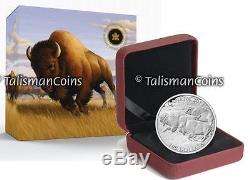 Exciting and extremely desirable - an original animal work of art, struck in the purest silver in the world! Experience the call of the wild with that American wildlife icon, the buffalo or bison, with a mintage limit and high face value - what's not to love? We have managed to acquire a limited quantity of this unique and perhaps even revolutionary! It's a true thrill to wildlife.

Lovers when they catch a glimpse of the majestic buffalo in the wild! Two centuries ago, the speed and power of a vast stampeding herd of American Bison would churn up clouds of dust that roiled high into the sky, carried for miles across the Great Plains. Who hunted them, they provided an entire way of life.

Today, though bison are greatly reduced in number, we can still see the deeply worn paths of their traditional migratory routes across the prairies. Enormous, powerful, invested with exceptional senses of smell and sound, todays bison faces new threats, including habitat destruction and new diseases. These noble beasts will doubtless face these dangers as they have others through the millennia: by relying on endurance, determination, and the protective strength of the herd. These magnificent animal coins offer coin collectors of all means the opportunity to acquire dynamic, striking wildlife designs, all minted in the purest silver on the planet! With its gorgeous designs, limited mintage and very high face value, a fast sell out at the Mint was anticipated and has occurred!

The Mint had imposed a. (go ahead, ask yourself why)! We do not currently have a limit - don't delay - get yours today! The vignette by Canadian artist Claudio DAngelo portrays three members of a stampeding buffalo herd racing across the Great Plains.

Seen in profile from their left side, these massive creatures illustrate the movement and momentum of the bison in full gallop, its massive chest and head held low beneath the hump of its shaggy back as its furred forelegs move together in opposition to its long slender back legs. The three large animals fly across a high-grassed prairie, each blade of grass, along with the shaggy fur of the animals, rendered in exquisite detail by Royal Canadian Mint engravers. In the distant background, the prairie gives way to foothills of the towering Rocky Mountains.

Whose bases are ringed with conifers. Above the distant horizon, a massive cloud bank gathers in the silver sky.

While the artistry of the design illustrates the beauty and power of the bison, the exceptional textural treatment illustrates the masterful technique by which the engravers have achieved depth and tone through chasing alone. It is also the largest land mammal in North America, often reaching six feet (2 meters) in height and weighing over 2,000 pounds (900 kilograms), mirroring our vast lands massiveness and power. Despite their great size and abundance (its population was once over 170,000) these great foragers were thought extinct by the dawn of the twentieth century. As with other bison, the Wood Bison's population was devastated by hunting and other factors.

By the early 1900s, they were regarded as extremely rare or perhaps nearly extinct. However, a herd of about 200 was discovered in Alberta, Canada in 1957.

This herd has since recovered to a total population of approximately 2,500, largely as a result of conservation efforts by Canadian government agencies. Long an example of humanitys destructive power, the bison has, for far longer, been an American icon, symbol of the West, and a core component of the pantheon of Canadiana. Through its successful rehabilitation, the story of the wood bison may now also become one of Canadian conservations success stories. Offers coin collectors of all means the opportunity to acquire significant, striking designs, all minted in the purest silver on the planet!

This one troy ounce silver coin is 99.99% pure! Designed by artist Claudio D'Angelo, the dynamic scene depicts three bison. Stampeding across the Great Plains! The date and denomination are also indicated.

REGINA (Elizabeth II, Queen by the Grace of God) also appears. The coin is encapsulated inside a burgundy leatherette, clamshell-style presentation case, lined with black velvet and protected by a full color outer box.

A certificate of authenticity is included. Master of the Prairie Wind: The American Bison. Two centuries ago, the speed and power of a vast stampeding herd of American Bison would churn up clouds of dust that roiled high into the sky, carried for kilometres on the prairie winds. Today, though bisons are greatly reduced in number, we can still see the deeply worn paths of their traditional migratory routes across the Canadian prairies.

Enormous, powerful, invested with exceptional senses of smell and sound, todays bison faces new threats in the Canadian landscape, including habitat destruction, and new diseasesbut will doubtless face these dangers as they have others through the millennia: by relying on endurance, determination, and the protective strength of the herd. Talisman World Coins and Medals has been in business for more than 20 years and is one of the largest world coin direct distributors and wholesalers in the world. The item "Canada 2013 Wildlife in Motion $100 Bison Buffalo Stampede Pure Silver Proof" is in sale since Thursday, August 7, 2014.