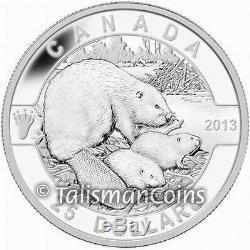 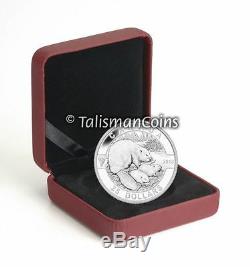 A masterwork of wildlife fine art, an adult beaver felling a tree by artist Pierre Leduc, is intricately rendered in pure silver on this meticulously engraved, low mintage proof beauty! Celebrate Canadas uniqueness with the Oh! Canada's national identity is much like its majestic landscape: diverse, storied, and always fascinating! In the ever-changing world of Canadiana, a few concepts tend to reflect the nations natural assets and social and cultural institutions.

Born of this complex background, these five Canadian animal icons. Are undeniable touchstones of the majestic land and its wildlife. These are the scenes that plumb the depths of Canada's own pride in itself, while kindling the world's love for the great nation that is Canada! Collect these five eminently affordable pure silver. Proofs - then revisit your coins again and again to marvel at their cultural significance and detailed imagery!

In the background, we see the beavers home pond in which is immersed another twig structure. In the far distance, the shoreline is dotted with the leafy deciduous trees preferred by the beaver. The distinct design hallmark of the O Canada series has the central image set between two semi-circular banners (each laser polished to a gleaming, mirror-like finish) with the top band proudly proclaiming the legend Canada, and the denomination in the lower band. "Busy as a beaver" refers to the hardworking and industrious nature of this furry critter.

When trappers would bring their furs to the trading posts, something was needed to represent the value of the pelts. At first, everything from porcupine quills, ivory discs and bits of wood or bone were used - anything that that the trapper and merchant agreed upon. As the industry became more sophisticated, trade tokens began to appear.

As the two parties went through the furs, tokens would be placed on the counter. Some trade tokens were square. Others featured the prize of the fur trade that also reigns as one of Canada's earliest forms of currency - the beaver! To this day, the beaver.

Is featured on the Canadian 5 cents (nickel) coin! The Royal Canadian Mint refines the purest silver in the world. The RCM is also the only mint in the world to issue commemorative coins in a.

This silver proof coin is 99.99% pure! A meticulously detailed and finely engraved detail of a mother beaver.

And her two young or kits. The artistry is so subtle and intricate that the individual hairs on the beavers' fur coats can be clearly distinguished under a loupe. The traditional-style engraving has produced a magnificent work of beauty.

The date and denomination are also indicated. Her Majesty, Queen Elizabeth II of England. This portrait, the fourth effigy of the queen to appear on Canadian Coinage, was executed by the artist Susanna Blunt. The legend ELIZABETH II D.

REGINA ("Elizabeth II, Queen by the Grace of God") also appears. The coin is encapsulated inside a burgundy leatherette, clamshell-style presentation case, lined with black velvet and protected by a black outer box. An individually-numbered certificate of authenticity is included. A solid wood display case for the entire 5 coin series will be available to purchasers of the entire series halfway or more through the releases.

Canadas national identity is much like its majestic landscape: diverse, storied, and sometimes elusive. In the ever-changing tectonics of Canadian culture, identifiers tend to reflect the nations multicultural nature and its geography, fauna and flora, and social and political institutions.

Born of this complex background, Canadian icons are distinct because they carry meaning for all Canadians, regardless of where we live or how we came to be here. These are the images that plumb the depths of Canadian pride and kindle Canadians love for their home. Canadas Animal Avatar: The Beaver.

No other animal has affected Canadian history more than. By the late 17th century, European explorers had already come to realize that North America was not the sought-after Orient. What they found, instead, was a wealth of land and natural resources.

European fashions of the time used fur heavily and beaver-fur hats were extremely popular. Recognizing the opportunity to boost their economies, both England and France established burgeoning fur routes between Europe and Canadian settlements that stretched into the heart of the North American continent. The beaver pelt industry proved lucrative in the centuries that followed and beavers became so central to the financial success of firms like the Hudsons Bay Company that these organizations began to acknowledge the humble animal on their coats of arms and other identifiers. These are the earliest instances of the beavers emergence as a Canadian icon.

In the three centuries that followed, the beaver. Has become a well-known symbol of Canada and Canadian unity. In 1975, it was recognized by Parliament as a symbol of the sovereignty of Canada. Over-hunting nearly eradicated the beaver toward the end of the 19th century, but with declining demand for beaver fur, governments began protecting this unique animal.

In the years that have followed, we have come to known a great deal more about one of the nations most amazing animal residents. The largest rodent in North America a large beaver. Can weigh up to 32 kilograms and measure more than a metre long, including its 30-centimetre tail is amazingly well adapted for its habitat. Its large incisors are sharp enough to cut down more than 200 trees, measuring up to 40 centimetres each, per year. Its large, leathery, paddle-like tail is famous, acting as a rudder in the water and a counterbalance on land. But the beavers lesser-known adaptations are equally amazing. Beavers eyes are protected underwater thanks to transparent membranes that cover its eyes.

Its nostrils and ears completely close underwater. It uses its large, webbed hind feet for swimming and its small, dexterous forepaws, which are not webbed but have long sharp claws, for everything from lodge, dam, food cache, and canal construction to delicate digging, plucking, and carrying of sticks, rocks, and mud. Its hind feet bear plier-like double claws on the second toe, which the beaver uses for groomingessential for spreading oils that keep its dense fur waterproof.

Found throughout Canada from the 49th parallel to the Arctic Ocean, the Canadian beaver. Prefers forested and unforested areas with water courses bordered by deciduous trees and shrubs. The iconic image of the beaver. Reaches back to Canadas earliest roots. This resilient animal, unmatched except by humans for its ability to manipulate the land to its own ends, symbolizes the wealth of resources and innovation that have allowed Canada to evolve from a fur-trading outpost to a sovereign nation. The beavers persistence, penchant for hard work, and adaptability are qualities that Canadians hold dear. Talisman World Coins and Medals has been in business for more than 20 years and is one of the largest world coin direct distributors and wholesalers in the world. The item "Canada 2013 Oh! Canada Series #2 Beaver $25 Pure Silver Proof" is in sale since Sunday, February 10, 2013. This item is in the category "Coins & Paper Money\Coins\ Canada\Commemorative".