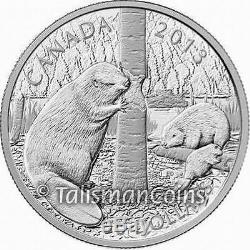 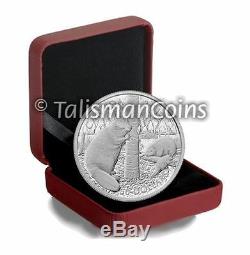 A masterwork of wildlife fine art, a beaver family by artist Emily Damstra, is intricately rendered in pure silver on this meticulously engraved, HUGE and low mintage (1,500) five ounce pure silver proof beauty! Talisman Coins is proud to bring you the latest in the Royal Canadian Mint's Canadian Wildlife Exploration Program. Featuring realistic, naturalistic representations of some of Canada's best-known animals! Designs recall those found on one of the most popular programs ever from the Royal Canadian Mint - the. Wildlife Coin & Stamps Sets.

Next up is the beaver. One of the official national symbols of Canada, representative of industrious nature! Following hot on the heels of the extremely successful introduction of the Robert Bateman Moose Series. (with coins available in silver, gold and platinum), the beaver. Is certain to be as popular!

Low mintage coins in the Robert Bateman Moose Series. Wildlife themes are always popular, and. This is the very first wildlife-themed five ounce pure silver proof in Canadian history! The original work of art depicts a beaver family, and the mintage limit is low - so very low, in fact (only 1,500 total), that we expected (and the Mint confirmed) a quick sell out! A Highly Detailed, Original Work of Art! The design by Canadian artist Emily Damstra features a portrait of a beaver family. Its members immersed in the work of felling trees for their dam, lodge, and food cache. On the left side of the image, a large beaver stands upright, hard at work chewing the trunk of a birch tree with its sharp incisors. Wood shavings cover the ground beneath the beavers feet and around the base of the tree.

Itself stands on its back paws, counterbalanced by its large flat tail, holding the tree trunk with its dexterous front claws. Its small ears, eyes, and nose (which can seal themselves under water) are exquisitely rendered in exceptionally fine detail.

On the right side of the image, behind and to the side of the upright beaver, another adult beaver and small kit (cub or young beaver) work on either side of a felled log, trimming away bark and preparing the log for use. On the extreme left of the image, the base of this felled tree is visible. The background of the image reveals a large pond backed by mountainous forest.

The beavers food cache emerges from the center of the pond. "Busy as a beaver" refers to the hardworking and industrious nature of this furry critter.

When trappers would bring their furs to the trading posts, something was needed to represent the value of the pelts. At first, everything from porcupine quills, ivory discs and bits of wood or bone were used - anything that that the trapper and merchant agreed upon. As the industry became more sophisticated, trade tokens began to appear. As the two parties went through the furs, tokens would be placed on the counter.

Some trade tokens were square. Others featured the prize of the fur trade that also reigns as one of Canada's earliest forms of currency - the beaver!

To this day, the beaver. Is featured on the Canadian 5 cents (nickel) coin! In fact, the beaver is one of the official symbols of Canada. The Royal Canadian Mint refines the purest silver in the world. The RCM is also the only mint in the world to issue commemorative coins in a.

This five ounce silver coin. A meticulously detailed and finely engraved detail of a beaver family, felling a tree. The artistry is so subtle and intricate that the individual hairs on the beaver's fur coat can be clearly distinguished under a loupe. The traditional-style engraving has produced a magnificent work of beauty. The date and denomination are also indicated.

Her Majesty, Queen Elizabeth II of England. This portrait, the fourth effigy of the queen to appear on Canadian Coinage, was executed by the artist Susanna Blunt.

The legend reads ELIZABETH II D. REGINA ("Elizabeth II, Queen by the Grace of God"). The coin is encapsulated inside a burgundy leatherette, clamshell-style presentation case, lined with black velvet and protected by a full color, custom box. An individually-numbered certificate of authenticity is included. Canadas National Animal: The Beaver. Along with the Canadian horse, the beaver is one of Canadas two national animals. While the beaver became an official symbol of Canada in 1975, its use as a symbol of this land goes back to the countrys earliest roots. In fact, a beaver appears on the first coat of arms associated with the land now known as Canada, dating back to the early 1620s. Played a major role in Canadas colonial history, becoming one of the primary motivators for the European explorers of the 17th century to forego their search for a passage to Asia and focus instead on the natural resources offered by the North American continent. With fur at its zenith in European fashions, beaver pelt hats became a product lucrative enough to feed settlement of the new continent by England and France. The fur trade has long-since ended, and efforts to protect this amazing animal began near the end of the 1800s, when beaver populations were in decline because of over hunting. Weighing up to 32 kilograms and measuring up to a metre in length, the beaver is the largest rodent in North America. Its sharp incisors fell about 200 trees annually, its paddle-like tail acts as a rudder in the water and a counterweight on land, and its adaptations to its semi-aquatic lifestyle are striking. Transparent eye membranes allow beavers to see as well underwater as on land, while specialized ears and nostrils completely close underwater. Its webbed hind feet make excellent swimming paddles and its web-free, sharply clawed forepaws are extremely dextrous, allowing this engineer of the animal kingdom to build its own bodies of water using dams, then construct an architecturally sound underwater lodge and mid-lake food cache, as well as canals where necessary. Its savvy forepaws are also helpful for careful fine-tuning, digging, and transporting its construction materials. Found throughout Canada from the 49th parallel to the Arctic Ocean, the beaver prefers water courses bordered by deciduous trees and shrubs. This 50-Dollar coin is certified to be 99.99% pure silver with a diameter of 65 millimetres and a metal weight of 5 ounces. The reverse design by Canadian artist Emily Damstra features a portrait of a beaver family, its members immersed in the work of felling trees for their dam, lodge, and food cache. The beaver itself stands on its back paws, counterbalanced by its large flat tail, holding the tree trunk with its dextrous front claws. Its small ears, eyes, and nosewhich can seal themselves under waterare rendered in fine detail. On the right side of the image, behind and to the side of the upright beaver, another adult beaver and small kit work on either side of a felled log, trimming away bark and preparing the log for use. The beavers food cache emerges from the centre of the pond. The image occupies the entire reverse field and is engraved with the word CANADA, the date 2013, and the face value of 50 DOLLARS. The obverse features the effigy of Her Majesty Queen Elizabeth II by Susanna Blunt. Talisman World Coins and Medals has been in business for more than 28 years and is one of the largest world coin direct distributors and wholesalers in the world. The item "Canada 2013 Beaver Family $50 Five 5 Oz Ounce Pure Silver Proof in Full OGP" is in sale since Friday, November 9, 2012. This item is in the category "Coins & Paper Money\Coins\ Canada\Commemorative". The seller is "talismancoins" and is located in Saint Louis, Missouri. This item can be shipped worldwide.