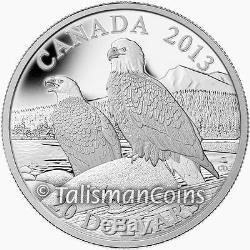 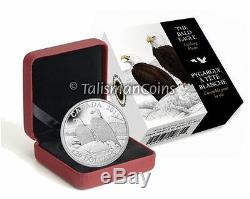 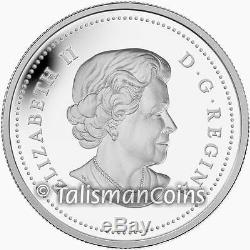 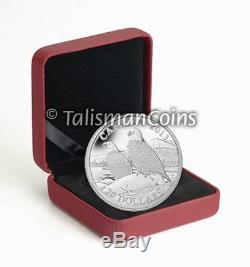 Wildlife Coin & Stamps Sets. This is the second in the new American Bald Eagle Series. Which will highlight the national bird of the United States of America from four different perspectives (please see below for more details on this program)! We're pleased to present. A stunning group vignette of this noble bird. Each one troy ounce, pure silver. Frosted cameo proof in this new series features unique edge lettering (see image below)! Best of all is the extremely low mintage limit of 7,500. As the second in an extremely popular series, we can not recommend this highly enough. Hesitate now and repent at your leisure! We expect the American Bald Eagles to perform likewise. And their mintage limits are only 7,500 each!

If you want to get in on the ground floor, act now - do not delay! A Highly Detailed, Original Work of Art!

The design by Canadian artist Claudio DâAngelo depicts two bald eagles perched on the rocky shore of a broad, fast-moving American river. Centered in the foreground, the eagles sit side-by-side. The one closest to the viewer is presented in three-quarter profile, its characteristic snowy head, sharp curved beak, dark, majestic wing and body feathers, and long talons rendered in exquisite dimensional detail.

The eagle stares authoritatively into the eyes of viewer. On the left side of the image, behind and to the side of the central eagle, sits a second bald eagle. Facing away from the viewer. Its sleek head and open beak are presented in profile, its broad neck and back finely rendered. At the very foreground in the lower portion of the image, we see the detritus of the vast and fast-moving river: a fallen tree, large boulders.

In the background, a sandy point reaches into the heart of the waterway. The distant shore is lined with conifers, rising in the far background toward a skyline of towering mountain peaks. This coin also features unique edge lettering, with the words â1 OZ FINE SILVER 1 OZ ARGENT PURâ engraved around the edge of the coin. Are planned (each with edge lettering): 1 Noble Bird - Portrait of Power.

Is a native North American bird of prey whose battle back from the brink of extinction in some areas in the 1970s, is a species success story. In Canada, salmon-rich British Columbia is the astonishing hunterâs stronghold!

However, this magnificent bird breeds in all provinces and territories. Its populations are regularly monitored by wilderness authorities. Most people realize that (despite its name) the bald eagle. The term âbaldâ may come from an outmoded usage meaning âwhiteâ, or from the term âpiebald, â which means âpatchy. Â The bald eagleâs head and tail are covered in bright white feathers and the remainder of its body is dark brown. It has a sharp hooked beak and large feet tipped with long, razor-like talons and small spicules (spikes) that make it an exceptional hunter. Eagles are renowned for their amazing vision, which allows them to see up to seven times farther than humans. Their swiftness is also notable and they can reach especially high speeds when diving. They consume small mammals, snakes, other birds, and carrion. A bald eagleâs nesting spot of choice is a large tree near an isolated, well-stocked body of water. Their nests are among the largest in the world, spanning over ten feet (three meters) and weighing up to a ton, and host two eaglets per breeding cycle. Bald eagles are believed to mate for life. Their mating dance is a sight to behold, as prospective partners take turns trying to impress one another with complicated aerial maneuvers that include cartwheels, talon-locking, and more. Coastal eagles in more moderate climates tend to stay in the same territory year round; otherwise, eagles will migrate to coastal or southern wintering grounds. An apex predator exclusive to North America with no obvious natural enemies, the bald eagle. Population today seems to remain stable throughout most of its range. Is the national bird of the United States! We believe that this will be a very scarce issue, difficult to find in the aftermarket for years to come. The first two issues in Wildlife Exploration Program. Silver Proof (to say nothing of the previous in the series)! Finally, the edge lettering is a nice little bonus, too!

The Royal Canadian Mint refines the purest silver in the world. The RCM is also the only mint in the world to issue commemorative coins in a. This one ounce silver coin is 99.99% pure! A meticulously detailed and finely profiled portrait of a noble bald eagle pair.

The artistry is so subtle and intricate that the individual feathers on the eagle can be clearly distinguished. The traditional-style engraving has produced a magnificent work of beauty. The date and denomination are also indicated.

Her Majesty, Queen Elizabeth II of England. This portrait, the fourth effigy of the queen to appear on Canadian coinage, was executed by the artist Susanna Blunt. The legend ELIZABETH II D.

REGINA ("Elizabeth II, Queen by the Grace of God") also appears. Unique to this series, the edge lettering legend 1 OZ FINE SILVER - 1 OZ ARGENT PUR guarantees the weight and purity of the metal content. The coin is encapsulated inside a burgundy leatherette, clamshell-style presentation case, lined with black velvet and protected by a full color outer box.

An individually-numbered certificate of authenticity is included. Is Canadaâs largest bird of prey and the only eagle exclusive to North America.

An apex predator with no natural enemies, the bald eagle has long been a potent symbol of vision, power, and stoicism. The adult boasts a wing span of more than 2 metres, a standing height of about 1 metre, and an average weight of up to 7 kilograms. Females are generally larger than males.

The renowned raptor is noted for its distinctive dark-feathered body and white-feathered head, large golden eyes, bright yellow beak, and massive yellow claws armed with sharp, powerful talons. This long-lived bird can survive nearly 30 years in the wild and even longer in captivity. Nesting in tall trees near large bodies of water and well away from human habitation, bald eagles survive on a diet of fish, birds, invertebrates, and small mammals, but are opportunistic feeders who will also steal from other predators and eat carrion. The bald eagle does not reach reproductive maturity until its fifth year of life, at which time the eagle seeks a mate that will likely become its life partner.

In some instances, mated adult eagles will seek a new partner if one of the pair leaves the region or dies, or if the pair have difficulty reproducing. The mating process begins with courtship, which is an amazing sight to behold for lucky onlookers.

The courtship âdanceâ is a display of amazing partnered aerodynamics as the couple swoops, dives, spins, wheels, locks claws, chases and calls to one another in full flight high above the ground. Once mated, the pair seeks a nesting spot.

Most bald eagles in Canada, concentrated particularly on the Pacific Coast, choose broad, tall conifers near the ocean or another large body of water. Those without access to trees will nest in cliffs or other elevated and isolated natural features. The region immediately surrounding the chosen nesting spot becomes the pairâs defensible hunting and breeding territory. Together, the couple tackles the considerable task of nest building. Bald eagle nests are massive structures of branch and twig averaging several metres in diameter and a metre deep.

These nests become firmly established for this long-lived bird, which adds new material to the nest each year. Some eagle pairs will build more than one such nest within their territory, and will alternate their usage from year to year. The female will lay her one to three large eggs on a soft feather-lined divot in the centre of the structure.

In Canada, most bald eagle populations are concentrated along the Pacific coast; however, stable smaller populations are also found across the prairie provinces, in Northern Ontario, on Cape Breton Island, and in Newfoundland. At-risk populations are found in southern Ontario and New Brunswick. Talisman World Coins and Medals has been in business for more than 20 years and is one of the largest world coin direct distributors and wholesalers in the world. The item "Canada 2013 Bald Eagle #2 Lifelong Mates $20 1 Oz Silver Proof w Edge Lettering" is in sale since Sunday, November 3, 2013.