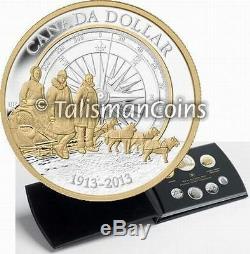 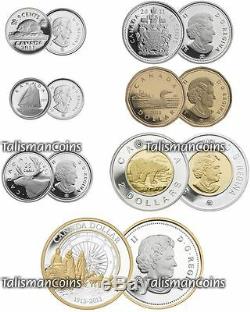 This year's Double Dollar Proof Set is completely 99.99% pure silver and features a gold-plated silver dollar (available only in this set) commemorating. The centennial of the Canadian Arctic Expedition of 1913.

With a dog sled engraved in pure silver. The Royal Canadian Mint is releasing a multi-coin program. The historical and intricately engraved scene depicts a dog sled superimposed on a compass. Was a landmark event in the exploration of the uncharted polar regions, helping to map the extent of Canadas Arctic territory, discover hitherto unknown islands, and uncover important research about the people, flora, fauna, and geology of the region. The year 2013 marks the 100th anniversary of the Expedition, whose achievements are celebrated with this low mintage, pure.

Each and every coin in this Double Dollar Proof Set is now struck in 99.99% pure silver - the purest silver on the planet! This includes the gold-plated Arctic Expedition Commemorative Silver Dollar! - Yes, the nickel, loonie and toonie are all struck in pure silver!

Finally, the Pure Silver Double Dollar Proof Set is enhanced with a cover of genuine, black leather! For this annual release - only 25,000!

That's a whopping 20,000 less than 2011! Compare that to the mintage of U. Proof sets some in the millions! We recommend not delaying, and believe that this double dollar pure silver proof set will sell out. A quick sell out at the Mint is anticipated!

The Mint has released an outstanding program of coins in honor of the centennial of the Canadian Arctic Expedition. Including several numismatic silver dollars. All feature a minutely detailed design depicting explores and their team of sled dogs. Design is available in 3 different varieties, included among these program options: Silver Dollar #1 - A Brilliant Uncirculated Pure Silver Dollar.

Highlights several significant elements of the Canadian Arctic Expedition. The main image (drawn directly from the abundant photography from the Expedition) presents a portrait of three explorers standing beside a dogsled packed with gear.

Harnessed to the sled, the waiting dog team watches and listens for the command to move on across the frozen Arctic tundra. In the background, a stylized image of a compass points to 10 degrees east of true North.

The annual Silver Proof Set. Includes a full-proof-finish example of each and every one of the circulation coins of Canada, each of which features a design of national importance, including: Five Cent Beaver Nickel Ten Cent Bluenose Schooner Dime Twenty-Five Cent Caribou Quarter Fifty Cent Coat of Arms Half Dollar One Dollar Common Loon "Loonie" Two Dollar Bi-Metal Polar Bear "Toonie" All of these coins above are minted in. Including the five cent beaver "nickel", gold-plated common loon. Dollar, and two dollar bimetallic polar bear. "Toonie", which includes a 24-karat gold-plated core.

None of these three coins were ever issued for circulation in silver! Every coin is struck with the Mint's proof finish, with frosted cameo devices and dark, mirrored fields (or background).

Each Pure Silver Proof Set also includes a pure silver. Proof dollar, selectively highlighted in 24-karat gold. This year the proof set dollar commemorates the centennial of the Canadian Arctic Expedition of 2013. This special gold-plated dollar is found only in this set, although we do have the unplated proof and BU versions available separately. The Canadian Arctic Expedition of 19131916 was a scientific expedition inside the Arctic Circle organized and led by Vilhjalmur Stefansson.

The expedition was originally to be sponsored by the National Geographic Society of the United States and the American Museum of Natural History. However, Canada took over the sponsorship because of the potential for discovery of new land and because Stefansson, who though born in Canada was now an American, re-established his Canadian citizenship. Was divided into a Northern Party (led by Stefansson), and a Southern Party led by Rudolph M. The objective of the Northern Party was to explore for new land north and west of the known land of the Canadian Arctic. At this time the possible existence of large, undiscovered land masses, comparable to the Canadian Arctic islands or even a small continent, was (correctly) thought scientifically plausible.

The approach of the Northern Party, besides searching for new land, was a program of through-ice depth soundings to map the edge of the continental shelf. Meteorological, magnetic, and marine biological investigations were also planned. The objective of the Southern party was scientific documentation of the geography, geology, resources, wildlife, and people of the Mackenzie River delta and adjacent regions of Canada between Cape Parry and the Kent Peninsula, for about 100 mi (160 km) inland, and southern and eastern Victoria Island. Copper deposits and trade routes were of particular interest.

1913 was a particularly bad year for Arctic navigation. All of the expedition ships were frozen in before they could reach their initial destination of Herschel Island. Was carried off and eventually crushed by the ice, leading to loss of eleven lives before a famous rescue. Most of the Southern Party had traveled in other ships of the expedition, and Stefansson left the. Reconstituted the Northern Party with local hires and resumed exploring.

Only one of the fourteen. The Southern Party remained in the North through the summer of 1916, exploring and mapping as far east as Bathurst Inlet. Some members of the Northern Party continued exploring through 1918. The expedition discovered land previously unknown even to the Inuit (including Brock, Mackenzie King, Borden, Meighen, and Lougheed Islands), produced valuable data, and launched the careers of several explorers and scientists.

The controversies it engendered persisted for decades. This year the mint has imposed a strict.

In addition, this Pure Silver Proof Set is the only way to get the gold-plated annual silver dollar. All collectors of Canadian dollar coins and all silver dollar collectors need this coin. This is the sixth Proof Set in which the gold-plated proof silver dollar is highlighted in gold on both sides (the rims are attractively plated on both obverse & reverse). These factors, combined with the premium packaging, make this set a great value! The main image drawn directly from the abundant photography from the Canadian Arctic Expedition.

Presents a portrait of three explorers standing beside a dogsled packed with gear. The reverse of each coin features Her Majesty, Queen Elizabeth II of England. This portrait, the fourth effigy of the queen to appear on Canadian coinage, was executed by the artist Susanna Blunt. The legend ELIZABETH II D. REGINA ("Elizabeth II, Queen by the Grace of God") also appears. The coins are sealed a sturdy plastic lens, elegantly presented inside a large, genuine black leather book lined with black velvet and protected by a black outer box.

An individually-numbered certificate with full specifications accompanies the set. 4 Dollars and 90 Cents.

Bonnie Ross (Arctic Expedition dollar). The Canadian Arctic Expedition 19131916. On the antique celluloid, the light flickers. Sled dogs move silently across the Arctic tundra. A man perched on an ice floe surveys the horizon as teams of men and dogs prepare for ice-bound travel behind him.

In the distance snow-capped mountains rise into the sky like jagged shards of ice. In grainy photos, men stand alongside makeshift fences, before shelters made of skins and furs, in open ice fields, atop sleds packed with gear.

Some smile; others stare silently into the lens, arms crossed, thoughts unfathomable. These are only a few of the approximately 4,000 photographs and more than 2,700 metres of film capturing one of the twentieth centurys most exciting moments in exploration: the Canadian Arctic Expedition. In 1913, Canadian Prime Minister Sir Robert Borden commissioned an expedition, led by Manitoba-born ethnologist Vilhjalmur Stefansson, to explore and map the western Canadian Arctic.

Stefansson and zoologist Rudolph Anderson had travelled through the Far North the previous decade. Knowing that there was a great deal of unexplored potential in the region, Stefansson planned to continue his earlier journey, but the Government of Canada, recognizing the importance of new sovereign territory, hosted the Expedition and broadened its mission significantly.

A Northern Party led by Stefansson would undertake the mapping exercise while a Southern Party led by Anderson would explore the geology, resources, and native inhabitants of the northern mainland. Travelling by sea and despite significant hardships, the Northern Party covered thousands of kilometres, mapping land that even the local inhabitants had never seen. The Northern Party discovered four new islands and proved that some of the geography proposed by nineteenth century expeditions was erroneous. The Southern Party completed the full mapping of the mainland and produced 14 volumes of scientific data as well as thousands of specimens and artefacts, opening up a new world of wonder for Canadians. Their findings included information about flora and fauna never before recorded, fossil samples, and more.

From these Aboriginal peoplessome of whom participated in the Expedition as guides and other assistantsthey collected artistic artefacts, tools, knowledge, and thousands of photographs as well as extensive film footage. S artefacts, photos, and recordings enabled researchers to introduce to the rest of the world cultures that had been virtually inaccessible until that time.

The artefacts have also had a broad educational legacy, forming the basis of numerous educational programs and museum exhibits, and are an important pillar of the permanent National collections of the Canadian Museum of Nature and the Canadian Museum of Civilization. Talisman World Coins and Medals has been in business for more than 20 years and is one of the largest world coin direct distributors and wholesalers in the world.

The item "Canada 2013 7 Coin Pure Silver Proof Set with Arctic Expedition Gold Plated $1" is in sale since Tuesday, January 8, 2013. This item is in the category "Coins & Paper Money\Coins\ Canada\Commemorative". The seller is "talismancoins" and is located in Saint Louis, Missouri.