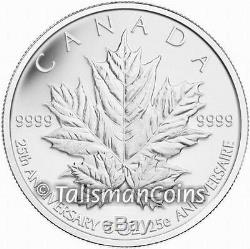 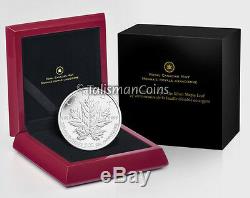 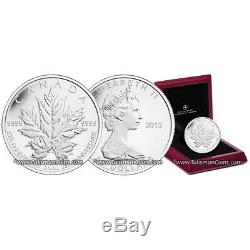 Celebrate the 25th Anniversary of the Silver Maple Leaf with a HUGE, one-year-only-design on the Mint's unique 5 ounce pure silver maple leaf - with a mintage limit of only 2,500! In 1988, who knew that these would become the most popular and collected series of Canadian coins in history? Now, twenty-five years later, the mint is again making history with this stunning, pure silver. Reverse proof with an unique, one-year-only Sugar Maple. First five troy ounce SML in years. This coin features a handsome, one-year-only maple leaf design, commissioned specifically for this anniversary from Canadian artist Arnold Nogy! An added bonus is the retro portrait of Queen Elizabeth II, taken directly from the original 1988 Silver Maple Leaf. Even more significant is the. Tremendously low mintage limit of only 2,500. Creating a exclusive opportunity for the savvy investor! Because of the popularity of Silver Maple Leaf, the huge size, and the very low mintage limit, a quick sell out was expected and has occurred. It is only the second five ounce Silver Maple Leaf ever! Purest silver in the world - this Silver Maple Leaf is four 9s pure. Total worldwide mintage is only 2,500! We expect it to go quickly at the mint and increase in the aftermarket! Given its unique status, low mintage, and high profile, this will become one of the keys to the entire SML series. Every Silver Maple Leaf collector needs the unique five-ounce silver maple! Read on for some more interesting facts about the new 25th Anniversary Five Troy Ounce Silver Maple leaf! Unique, one-year-only design comprised of three Sugar Maple.

The pride and joy of maple syrup producers in Vermont, Ontario and Quebec (but present as far east as Nova Scotia and as far south as the state of Georgia), the Orange Sugar Maple. Is recognized around the world as the source of the sweetest, clearest maple syrup. It takes a great deal of work to produce this trees sweet, golden bounty: one quart (one liter) of syrup requires boiling down 10 gallons (40 liters) of sap! A large-leafed, long-lived tree that often tops 115 feet (35 m) in height, the sugar maple.

Can live for 200 years! The shape of its five-lobed leaf is recognizable around the world; a stylized version of its leaf is found at the center of the Canadian maple leaf flag. Autumn in a forest dominated by sugar maples is an extraordinary sight. Intense rainbows of yellow, orange, red, and purple seem to set the countryside aflame in regions where sugar maples grow. Were long attracted to the sugar maple for its savory sap, sweet flowers, and close-grained hardwood.

But the leaves and sap are not the only prized features of the Sugar Maple. Sugar Maple wood is exceptionally hard, making it a material of choice for furniture-makers and producers of hardwood flooring, as well as makers of other notable products, including bowling pins and alley floors, basketball courts, baseball bats, violins, guitars, and drums. Ultra-low mintage, an unique, one-year-only Silver Maple Leaf design, HUGE 5 troy ounce size, the purest silver on the planet, and frosted reverse proof finish, all in a handsome, burgundy lacquered wooden presentation box. What more do we have to say?

The Royal Canadian Mint refines the purest silver in the world. The RCM is also the only mint in the world to issue commemorative coins in a. This silver proof coin is 99.99% pure! The legend 9999 FINE SILVER 5 OZ guarantees the weight and purity, while the legend 25TH ANNIVERSARY denotes the theme. Her Majesty, Queen Elizabeth II of England. This portrait, the second effigy of the queen to appear on Canadian coinage, was executed by the artist Arnold Machin. The legend ELIZABETH II, the date and denomination also appear.

Is encapsulated inside a burgundy lacquered wood, clamshell-style presentation case, lined with black velvet, protected by a black outer box. An individually-numbered certificate of authenticity is included.

In addition, the obverse features the tiara portrait effigy of Her Majesty Queen Elizabeth II from the 1988 original, as well as the commemorative year 1988 and 2013. This iconic reverse designed by Canadian artist Arnold Nogy depicts two small sugar maple leaves overlapping the bottom lobes of one large sugar maple leaf. The obverse shows an embossed face value of 50 dollars, the commemorative years 1988 and 2013, the words ELIZABETH II, and the effigy of Her Majesty Queen Elizabeth II by Arnold Machin, from the coins first release in 1988. The item "Canada 2013 25th Anniversary SML $50 5 Oz Pure Silver Maple Leaf Reverse Proof" is in sale since Friday, April 26, 2013.