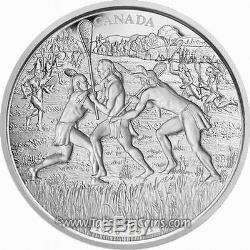 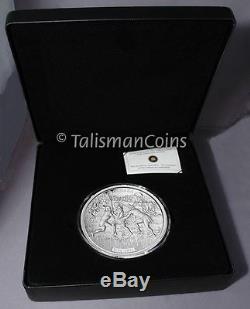 TRULY RARE and HUGE silver kilogram features intense, dramatic Native American scene, and the lowest mintage EVER for a Canadian Silver Kilogram - only 600 yes, you read that right. That's all we can say about this huge silver beauty! We're willing to bet that this is the one of the most dramatic One Kilogram. Coins you've ever seen!

Minted by the Royal Canadian Mint in pure silver. With a face value of 250 dollars, this huge and intricately engraved masterwork is struck in ultra high, medallic relief.

The riveting scene of an intense, Native American. Lacrosse match is highlighted on the huge tableau in full, frosted cameo proof finish- at more than 100 mm in diameter.

It is a full 4 inches across! Even better is the investment potential. The total worldwide mintage of 600.

(six hundred) seems impossibly low, and means no more than that number of collectors in the world can ever possess it! A quick sell out was expected and has occurred, with a tiny mintage limit of only 600! North America's Own True Sport. North America has a limited number of cultural claims to fame on the world scene. In music, jazz is a true American original; in architecture, it's the Prairie School. In sport, we can't even claim our most popular games - neither baseball (derived from English ball games, including cricket) nor football (derived from rugby), nor tennis, golf, etc.

But Native Americans did invent the game of lacrosse centuries ago, making it a true North American original! Lacrosse is sport, legend, culture and history combined: a unique feature of the American identity that emerged when European colonists first encountered Native American societies.

Lacrosse was much more than play. Countless tribes engaged in "The Creators Game", firm in the belief the Creator invented the game for His own amusement. Players took to the field with the highest ideals. Lacrosse was a training ground for young warriors and was a non-warring means to settle tribal disputes.

Players were determined to bring honor and glory to their teammates and to their tribes. Matches could cover vast territories and last months at a time. In an effort to intimidate their opponents, players covered their faces with war paint (a ritual believed to be the inspiration behind the modern custom of painting hockey goalie masks). One of the first European documentations of this powerful sport is believed to have been written 375 years ago in 1636 by Jesuit missionary Jean de Brébeuf from Condé-sur-Vire, France. (the original name for Lacrosse) while living among the Hurons. Upon noticing that the playing stick resembled a bishops crosier, he renamed the game "la crosse", the name by which we still know it today.

If you're considering this Proof Silver Kilo. As an investment, it's kind of hard to go wrong here. All Native American collectors need this coin!

Tremendous size - 1000 grams (1 kilogram)! Savvy collectors can ever own this monstrous beauty! The meticulous detailing and incredible design one expects from the artistic engravers at the Royal Canadian Mint! Struck in ultra high, medallic relief. With tremendous depth of field for a dramatic and realistic scene!

The last two silver kilogramss from the RCM the 2010 Banff 1 Kilo. And the 2011 Maple Forever 1 Kilo. Disappeared quickly and are nearly impossible to locate in the aftermarket! From a numismatic point of view - this ultra-rarity will be the centerpiece of your collection!

The Royal Canadian Mint refines the purest silver in the world. The RCM is also the only mint in the world to issue commemorative coins in a. This one kilogram silver proof. An intricately engraved, ultra high relief. Scene of Native American Indians playing lacrosse, with tremendous depth of field.

Her Majesty, Queen Elizabeth II of England, in profile facing right. This portrait, the fourth effigy of the queen to appear on Canadian coinage, was executed by the artist Susanna Blunt. The date, denomination and legend ELIZABETH II D. REGINA ("Elizabeth II, Queen by the Grace of God") also appear. The coin is encapsulated inside a black leatherette, clamshell-style presentation case, lined with black velvet and protected by a black outer box.

An individually-numbered certificate of authenticity is included. 101.80 mm (4 inches). Talisman World Coins and Medals has been in business for more than 28 years and is one of the largest world coin direct distributors and wholesalers in the world. The item "Canada 2011 Lacrosse 375th $250 Native American Kilo Pure Silver Proof Kilogram" is in sale since Monday, July 18, 2011. This item is in the category "Coins & Paper Money\Coins\ Canada\Commemorative".