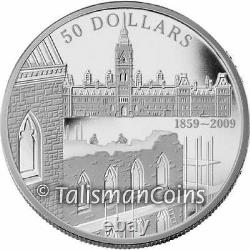 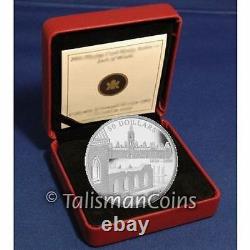 9999 fine pure silver beauty - only the fourth 5 troy ounce silver proof ever issued by Canada! One hundred fifty years ago, before Confederation had even occurred and Canada had officially been born, a great nation nonetheless began construction on a group of buildings that would become the Parliamentary seat of one of the major democracies of the world. This huge beauty commemorates the 150th anniversary of the beginning of the construction of the Canadian Parliament Buildings on Parliament Hill.

Celebrate with this gorgeous, and low-mintage, 5 ounce coin, perfect for such a grand edifice! Pure silver proof is one of two investment-grade coins in this program, the other being a exceedingly rare, 5 Ounce Gold Proof. Both feature the meticulous engraving and attention to detail that have made the Royal Canadian Mint's collector coins famous the world over! For more pictures of and information about the magnificent buildings on Parliament Hill, including the Centre Block, please see the articles lower down in this presentation. The Royal Canadian Mint refines the purest silver in the world.

This five ounce silver coin is 99.99% pure! The design features the original architecture of the Parliament Buildings as proposed by Fuller and Jones, complete with capped tower and finials.

The incomplete West Block in the foreground underscores the start of construction. A frosted cameo portrait of Her Majesty, Queen Elizabeth II of England, in profile facing right.

This portrait, the fourth effigy of the queen to appear on Canadian coinage, was executed by the artist Susanna Blunt. The legend The legend ELIZABETH II D. REGINA ("Elizabeth II, Queen by the Grace of God") also appears.

The coin is encapsulated inside an elegant, burgundy leatherette, clamshell-style presentation case lined with black velvet and protected by a black outer box. An individually-numbered certificate of authenticity is included. Parliament Hill and Its Buildings. Never before had anything so grand been built in Canada, but now was the time.

Originally the site of a military base in the 18th and early 19th centuries, development of the site into a governmental precinct began in 1859, after Bytown (the former name of Ottawa, Ontario) was chosen by Queen Victoria as the capital of the Province of Canada. Barrack Hill, high above the Ottawa River, had housed engineers during the construction of the Rideau Canal, and was available. The site was prominent, spacious and picturesque - perfect for a plaza of such importance. Construction began in December 1859 and was completed by the summer of 1866.

The Parliament Buildings incorporated the latest trends in Victorian Gothic Revivalism adapted to North American tastes and materials, but one feature of the original design was absent. Architects Thomas Fuller and Chilion Jones had originally proposed a central tower with a cap and decorative finials. These elements were added during 1872-78; when the Victoria Tower first opened in 1866, it featured peaked gables and Gothic end posts at each corner. Unfortunately, these architectural treasures were lost forever when fire raged through the Centre Block in 1916. The subsequent reconstruction was intent on respecting the original design but was expanded to provide more office space and adopt the latest architectural trends.

Parliament Hill took on its present form with the completion of the Peace Tower in 1927. Today's facades look quite different from the originals but are arguably Canada's most recognized buildings. One hundred and fifty years after construction first began, Ottawa's Parliament Buildings are still hailed as the purest example of Gothic Revival architecture in the Western Hemisphere.

Each year, Parliament Hill attracts approximately 3 million visitors each year - roughly 1/10 the total population of Canada! The Centre Block is the main building of the Canadian parliamentary complex on Parliament Hill, containing the Commons and Senate chambers, as well as the offices of a number of Members of Parliament and Senators, as well as senior administration for both legislative houses. It is also the location of several ceremonial spaces, such as the Hall of Honor, the Memorial Chamber, and Confederation Hall. Built in the Gothic Revival style, the present Centre Block is the second incarnation of the building, after the first was destroyed by fire in 1916 - all that remains of the original building is the Library of Parliament, at the rear of the Centre Block. Though construction began immediately after the blaze, sculpting work on the interior continued into the 1970s. Designed by Jean Omer Marchand and John A.

Pearson, the Centre Block is a 475 feet long by 245 feet deep, six story high, symmetrical structure built in the modern Gothic Revival style. It features a multitude of stone carvings, including gargoyles, grotesques, and friezes, in keeping with the Victorian High Gothic style of the rest of the parliamentary complex. The walls are faced with more than 50,000 blocks of over 24 different types of stone, though a rustic finished Nepean sandstone is the predominant kind of masonry, with dressed stone trim around the 550 windows and other edges.

The roof is of reinforced concrete covered with copper, and dotted with dormer windows. The interior walls are sheeted with Tyndall stone, a dolomitic limestone quarried in southeastern Manitoba, and chosen by the architects for its vibrant color and rich texture, formed by darker brown spots caused by fine fern markings. These surfaces are augmented by sculptural decoration done in Indiana limestone.

The Centre Block houses offices and facilities, including the Prime Minister's office, that of the Leader of Her Majesty's Loyal Opposition, and the offices of other party leaders, as well as senators, ministers, and commons staff. Further, there are numerous parliamentary committee rooms, and the Parliamentary Press Gallery. This item is in the category "Coins & Paper Money\Coins: Canada\Commemorative". The seller is "talismancoins" and is located in this country: US.