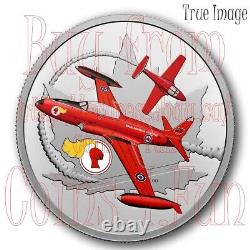 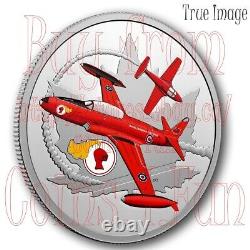 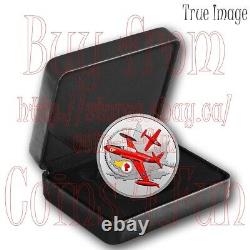 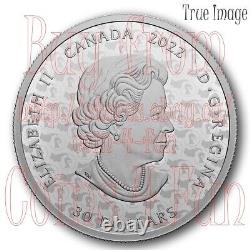 Before the Snowbirds, there was the Red Knight! From 1958 until 1969, the Red Knight delighted spectators across Canada and the United States with awe-inspiring aerobatic displays. The Royal Canadian Air Force's (RCAF) solo jet-aerobatic performer was equipped with the T-33 Silver Star (or "T-Bird", CT-133) and later, the CT-114 Tutor, which were decked out in a bright colour scheme, iconic red. These aircraft, along with the distinctive knight's helmet emblem they bore, have been colourfully recreated on this 99.99% pure silver tribute to the legendary (and much loved) Red Knight, whose show-stopping manoeuvres inspired a generation of air enthusiasts and enriched Canada's aviation heritage.

This coin shines the spotlight on the Red Knight, which has never been depicted on a Canadian coin. The colour-over-engraved elements make a vivid impression on your coin's reverse, where they're set against the maple leaf backdrop and surrounded by a mirror finish. For an extra touch of drama, a more matte frosting sets the Red Knight's white smoke trails apart! Why are two planes featured on this tribute to the RCAF's solo performer? The aircraft on your coin's reverse represent the two aircraft types that each served as the mount of the Red Knight: the T-33 from 1958 to 1968, and the Tutor in 1968 and 1969.

The maple leaf backdrop is also historic: it is based on the pre-1965 RCAF Roundel, which can be seen on the T-33's fuselage and wings in this design. If you missed out on 2021 Snowbirds. Coins, or if you're looking for another aviation-themed piece to include in your collection, this is the coin to get in 2022!

But mintage is limited to just 6,500 coins, so don't wait-order today! The Royal Canadian Mint certifies all of its collector coins. Your coin is encapsulated and presented in a Royal Canadian Mint-branded clamshell with a black beauty box. 99.99% pure silver with selective colour.

David Oram (reverse), Susanna Blunt (obverse). I do leave feedback for everyone. This item is in the category "Coins & Paper Money\Coins: Canada\Commemorative".

fun" and is located in this country: CA. This item can be shipped worldwide.