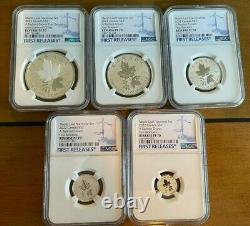 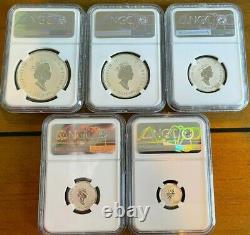 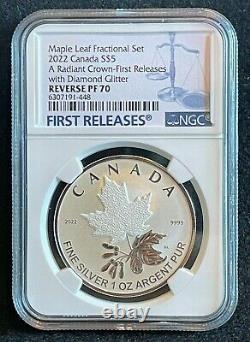 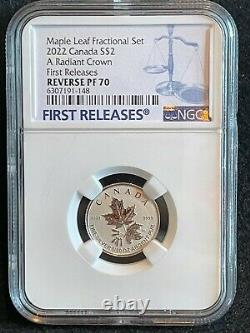 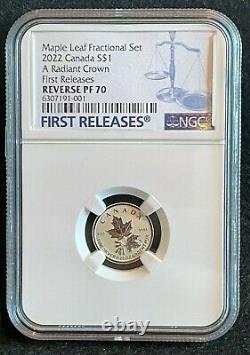 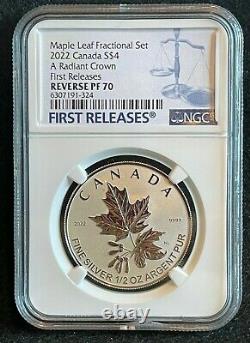 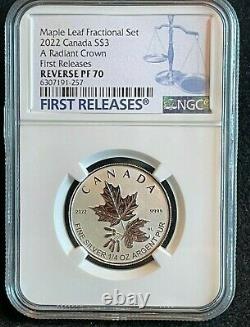 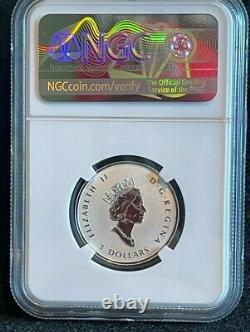 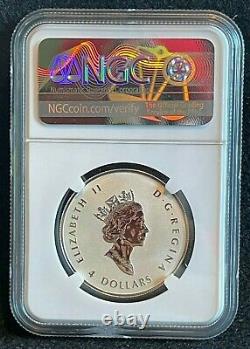 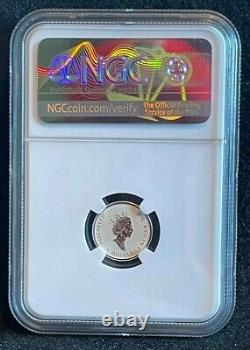 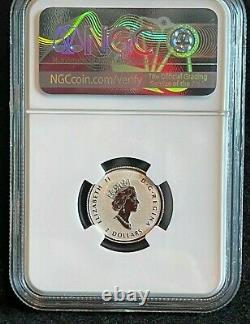 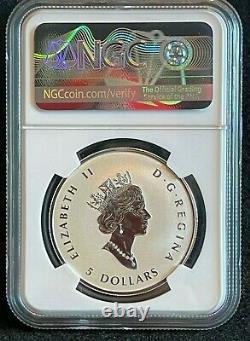 2022 Canada Radiant Crown Silver Maple Leaf Reverse Proof 5-Coin Set NGC PF70. Only 3,000 of these were minted, making this PF70 set extremely rare. Royal Diamond Diadem Coins That You Can Look At AND Touch! Its original name in Great Britain was the George IV State Diadem and it has been worn in state functions since 1820.

When it's not perched atop the head of the reigning monarch or a royal consort, the Diamond Diadem can be seen in the main public art gallery at Buckingham Palace. Expertly crafted more than 200 years ago with 1,333 diamonds, this extravagant piece of jewelry is a priceless artifact that has been consigned to the "look-but-don't-touch" realm of objects in the United Kingdom's Crown Jewels. But thanks to this mouth-watering release from The Royal Canadian Mint you can make it a part of your collection with this spectacular five-piece set that combines royal tradition with Canadian symbolism.

Historic Design Makes A Return Appearance. Queen Elizabeth II wears the Diamond Diadem every year during the procession to and from the annual State Opening of Parliament. She wore the regal headpiece for the first time during the procession to her coronation on June 2, 1953. The sight of the 27-year-old queen stepping out with the diadem was met with gasps of delight as the lovely young woman began her long and beloved reign as Great Britain and the Commonwealth's official head of State. To pay tribute to that momentous event, the coin's obverse design employed designer Dora de Pédery-Hunt's diademed effigy that appeared on Canadian coins from 1990 to 2002. The coin's obverse features the traditional Canadian image of two sugar maple leaves along with three pairs of winged seeds. Beautifully Enhanced With Fine Diamond Particles.

The 2022-dated legal-tender coins in this set were all struck in highly pure 99.99% silver. As you turn this coin in your hand, you'll see the maple leaf capture the light with a radiance that is profoundly beautiful - much like that radiated by the young queen who ascended to the throne in 1952 upon the death of her father 70 years ago!

Plus, these coins were struck with a unique Reverse Proof finish. The opposite of regular proof coins that feature frosted details rising over mirror-like fields, these Reverse Proofs were expertly crafted by the mint from hand-selected planchets, polished dies and multiple strikes to produce beautifully mirror-like details rising over frosted fields! Each coin also comes in Gem Proof condition and the entire set will come beautifully displayed in its original mint packaging that consists of a burgundy clamshell presentation case and a Certificate of Authenticity. Just 3,000 of these sets will ever be issued for worldwide release - a number that seems far too small to accommodate all the collectors and royal watchers who would like to add one of these offering to their collection. DAZZLING TRIBUTE TO THE QUEEN'S DIAMOND DIADEM. This incredible set pays tribute to the Diamond Diadem that Queen Elizabeth II wore to her coronation in 1953 and wears each year to and from the annual State Opening of Parliament. She is shown on the coin's obverse wearing the headpiece while the reverse features two sugar maple leaves along with three pairs of winged seeds. STRUCK IN HIGHLY PURE SILVER. Each coin in this 2022 Canada Radiant Crown Silver Maple Leaf 5-Coin Set was struck in highly pure 99.99% silver in weights ranging from 1/20th of an ounce to a full ounce.

In all, the set contains 1.9 ounces of Canadian silver. The one-ounce silver coin in this set has been specially enhanced with diamond glitter to make its design stand out from the rest of the set.