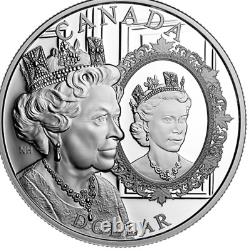 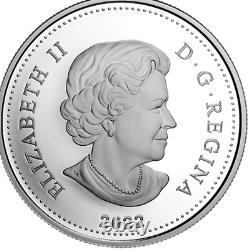 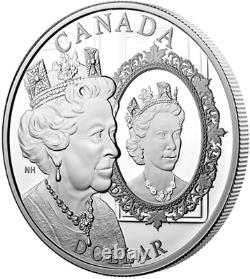 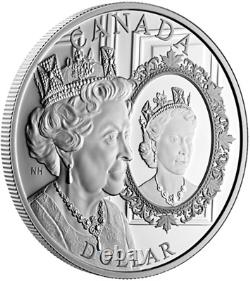 A GREAT CANADAIN COIN COLLECTORS GIFT! ENCAPSULATED COIN & COA ONLY! NO CLAMSHELL CASE OR OUTER BOX! Celebrate an unprecedented milestone with an extraordinary proof silver dollar. When Her Majesty Queen Elizabeth II began her reign in 1952, the 25-year-old monarch could not have known the kinds of challenges Canada and the world would face, or how much progress she would witness.

In many ways, the Queen of Canada came of age alongside this nation, embracing new and exciting developments, and adjusting to an ever-changing world with grace and dignity. Now, as Canada celebrates the Platinum Jubilee of Her Majesty Queen Elizabeth II, this special edition proof silver dollar reflects upon the journey of our modern monarch and celebrates her 70 years of service. A double portrait to mark an unprecedented royal milestone! In 2022, Her Majesty Queen Elizabeth II becomes the first British monarch to celebrate a Platinum Jubilee. Join us in honouring Her Majesty's dedication to service and her extraordinary 70-year reign as Queen of Canada and Head of the Commonwealth.

Her Majesty's historic long reign is beautifully represented by the double portrait reverse, which juxtaposes a portrait of Her Majesty today with one of her younger self in 1952, at the start of her reign. While remaining faithful to the artist's original concept, RCM engravers studied countless portraits of Her Majesty to ensure likeness during the engraving process. A must-have for royal enthusiasts and history lovers, this 99.99% pure silver coin will serve as a distinctive historical marker in your collection.

The Royal Canadian Mint certifies all of its collector coins. Designed by artist Neil Hamelin, your proof silver dollar's reverse features a double portrait of. Her Majesty Queen Elizabeth II to mark the historic occasion of her Platinum Jubilee. In the foreground, Her Majesty is presented in three-quarter view and radiates wisdom gained through her 70-year reign. Next to her is a portrait of her younger self in 1952, shortly after her accession to the throne; the ornate frame includes several maple leaves that serve as an additional tribute to the Queen of Canada.

The obverse features the date "2022" and the effigy of Her Majesty. Queen Elizabeth II by Susanna Blunt. In 2022, The Queen celebrates the 70. As people across Canada, the Commonwealth and indeed the world celebrate her Platinum Jubilee, they will reflect on the commitment made by her on her 21. Birthday to dedicate her life to public service.

Over the decades of her reign, she has remained steadfast in not only honouring her commitment but in surpassing it. Her Majesty succeeded to the throne on February 6, 1952, on the death of her father, King George VI. The 25-year-old princess-turned-Queen was visiting Kenya at the time, making her the first British monarch in more than 200 years to ascend to the throne while abroad. Her Majesty was crowned on June 2, 1953 at Westminster Abbey, site of every British coronation service since 1066.

Her Majesty's coronation was the first to be televised worldwide and was seen by millions. On your coin's reverse, both portraits of Her Majesty feature the George IV State Diadem, which can be seen on the obverse of Canadians coins issued between 1990 and 2002. This crown is most famously associated with Her Majesty, who wore it on Coronation Day and continues to wear it on State occasions, including the State Opening of Parliament.

Items shown in picture is similar to the actual items for sale. Stock Photo - You may get identical items than the actual items shown. Please do not hesitate to ask questions about this or any of our other auctions! Need more scans or pictures, just ask. We have many other Graded; Canadian Gold or Silver coins and cases/COA's in stock.

This item is in the category "Coins & Paper Money\Coins: Canada\Commemorative". The seller is "jw-collectibles" and is located in this country: CA. This item can be shipped worldwide.