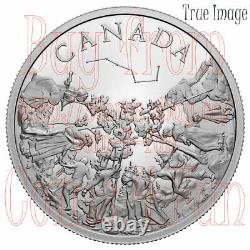 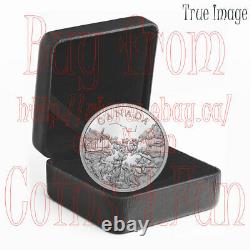 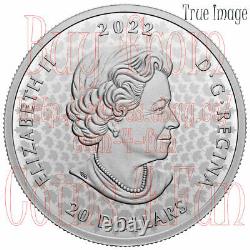 They risked it all for the promise of freedom at the end of their long journey, and that freedom had a name: "the promised land" that is present-day Canada. Coin honours the flight to freedom of those who "rode" the Underground Railroad to Canada, a safe haven after slavery was abolished here on August 1, 1834.

From the early 1800s through 1865, at least 30,000 enslaved people of African descent fled to British North America by way of a covert network of routes and safe houses. Many of these freedom seekers-men, women and children-travelled by foot, and often at night to avoid re-capture. Once in Canada, they found refuge in Black communities and settled in parts of Ontario, Quebec, New Brunswick and Nova Scotia, where they were secure in their freedom, but not free from discrimination. Celebrate Black History year-round with this heartfelt tribute to the freedom seekers. NEW RELEASE FOR BLACK HISTORY MONTH!

This is the fourth coin in our annual. Series, which honours the legacy of Black people in Canada whose achievements and struggles are an important part of Canada's story. Of 99.99% pure silver, this coin commemorates the Underground Railroad, the pathway to freedom for enslaved people of African descent who escaped to present-day Canada in the 19th century. A powerful addition to any collection, this is the first RCM coin commemorating the Underground Railroad. Canada was regarded as a safe haven after slavery was abolished throughout the British Empire on August 1, 1834 (August 1 is Emancipation Day in Canada), and it was the terminus for at least 30,000 enslaved people, believed to be as many as 100,000, who travelled the Underground Railroad. THE FOCUS IS ON HISTORY! To keep the focus on those who risked it all for freedom, the only word engraved on the reverse is "CANADA" and it is part of the design.

The stars in the night sky, including the Big Dipper seen on the coin's reverse, helped guide the freedom seekers in their journey north to "CANADA". Coin, your 2022 coin features a symbol of Canada on its obverse, where the maple leaf forms a repeating pattern that fills the field. The Royal Canadian Mint certifies all of its collector coins, including this one, which has a limited mintage of just 5,500 coins worldwide. Design: Designed by Canadian artist Kwame Delfish, your coin's reverse is an ode to the "Gospel Train" or Underground Railroad, the pathway to freedom for enslaved people of African descent in the 19th century.

The placement of men, women and children along the coin's edge creates a sense of circular motion to represent a long, continuous journey. The tall trees and rocky terrain are a reminder of some of the challenges they faced in the wilderness, where they often battled the elements while avoiding capture. Travelling at night, these freedom seekers are guided by the Big Dipper appearing in the night sky, where the stars directed them north to freedom and a new life in "CANADA". The obverse features a maple leaf pattern, the year "2022", a denomination of "20 DOLLARS" and the effigy of Her Majesty Queen Elizabeth II by Susanna Blunt.

This coin is meant to honour and pay homage to the ancestral slaves that escaped to the North in search of freedom. Many did not get to complete the journey and faced the same (if not more) hardships than what they left behind. The ones that made it built their legacies and shaped the mosaic that Canada is today.

My hope is that their strength and courage is illustrated on this coin, and that I have sung their gospel. Our history is rich and it is meaningful.

In sharing these stories, I hope to build awareness and encourage others to take the time to learn not only about the hardships, but the contributions and the achievements of Black people in Canada. Christa Bruce, Product Manager, Royal Canadian Mint. While engraving this coin, I focused my attention on the people because this is their story. I opted for a layered approach by first giving shape to the figures that represent the tens of thousands who risked their lives to find freedom. Other details add to the storytelling-for example, in the sky, a mix of frostings creates a twinkling effect that mimics starlight when you view the coin from different angles. August 1 is Emancipation Day in Canada The Underground Railroad helped many people of African descent escape enslavement in the American South, but until the 19th century, slavery existed in British North America (Canada) too. While anti-slavery measures had already been enacted in some Canadian jurisdictions, the. 1833, that came into effect on August 1, 1834 abolished slavery across most of the British Empire, including present-day Canada. In reality, freedom came more gradually to some and equality was far from assured. But the imperial statute represents a monumental milestone in Black Canadian history, and it shaped the view of Canada as a safe haven and a popular terminus for those who travelled the Freedom Train.

To maintain secrecy and avoid capture or punishment, the Underground Railroad used a system of code words based on railroad terminology. Located in "terminals" (cities or towns), a "station" or "depot" was a temporary safe house run by a "station master, " who hid the fugitives and provided meals and clothing. The ladle-shaped asterism known as the Big Dipper was dubbed the drinking gourd. " To those who escaped and travelled at night, the "drinking gourd" served as a point of reference in the night sky: the two stars on the outer edge of its "bowl always point to the North Star or Polaris, the lodestar for anyone travelling north.

Packaging: Your coin is encapsulated and presented in a black Royal Canadian Mint-branded clamshell with a black beauty box. Kwame Delfish (reverse), Susanna Blunt (obverse). I do leave feedback for everyone.

This item is in the category "Coins & Paper Money\Coins: Canada\Commemorative".fun" and is located in this country: CA. This item can be shipped worldwide.