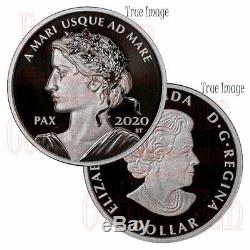 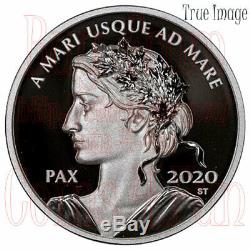 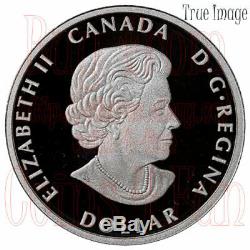 2020 - Silver Canada Peace Dollar 1 oz Proof Coin. Canada has long been associated with the search for a stable and secure international order. This connection began in 1957 when Lester B.

Pearson won the Nobel Peace Prize. Then Canadian Secretary of state for External Affairs, Pearson helped diffuse the Suez Crisis by creating the worlds first, large-scale United Nations peacekeeping force. Over the next 40 years, Canada's contribution in UN peacekeeping becomes an intrinsic part of the country's international role. In 1988, the UN received the Nobel Peace Prize for decades of peacekeeping activities. By then, Canada had contributed roughly 80,000 peacekeepers.

The Peace dollar celebrates Canada's dedication to making the world a more peaceful place. The technology used to mint this coin has allowed it to be made in ultra-high relief, giving it remarkable detail and lustre. As an added touch of design excellence, the Latin word PAX, which translates to PEACE in English is engraved along the edge of the coin.

The Royal Canadian Mint certifies all of its collector coins. 99.99% PURE SILVER COIN! The silver in this coin is as pure as Canadas pursuit of peace. The reverse design features the profile of Lady Peace, crowned with maple leaves. Her visage is accompanied by PAX 2020 and the Canadian national motto: A MARI USQUE AD MARE - From Sea to Sea. The coin also bears edge lettering with the Latin word PAX which means peace. The obverse design features the effigy of Her Majesty Queen Elizabeth II by Susanna Blunt. According to the 2018 Global Peace Index, Canada occupies the 6th place on the ranking. Pearson was not the only one to receive the Nobel Peace Prize. In 1988, thousands of Canadians among other peacekeepers have been collectively awarded for their service in UN missions. The Nobel Peace Prize led Canada to establish our own Canadian Peacekeeping Service Medal, now proudly worn by many Veterans. Following World War I, there was desire in the United States to create a coin symbolic of peace. The Peace dollar was first struck on December 28, 1921; just over a million were coined bearing a 1921 date. Minted from 1921 to 1928, and again in 1934 and 1935.. It was the last United States dollar coin to be struck for circulation in silver. In 1965, amid much controversy, the Denver mint struck over 316,000 Peace dollars dated 1964, but these were never issued, and all are believed to have been melted. Its obverse represents the head and neck of the Goddess of Liberty in profile, and the reverse depicts a bald eagle at rest clutching an olive branch, with the legend "Peace". Your coin is encapsulated and presented in a Royal Canadian Mint-branded clamshell with a black beauty box. Susan Taylor (reverse), Susanna Blunt (obverse). I do leave feedback for everyone. The item "2020 Peace Dollar $1 1 OZ Pure Silver Proof Coin Canada" is in sale since Friday, August 23, 2019. This item is in the category "Coins & Paper Money\Coins\ Canada\Commemorative".fun" and is located in Richmond Hill, Ontario.