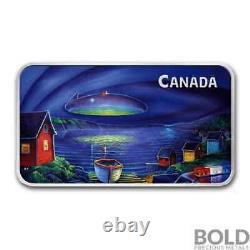 Each release also is strikingly colorized to depict the actual scene being examined. This includes the selective application of glow-in-the-dark color, activated by viewing under a black light! The very low mintage of only 5,000 pieces for global distribution makes this colored 2020 RCM Unexplained Phenomena: Clarenville Event 1oz Silver Proof coin highly collectible. Also included is a distinctive presentation case with a Certificate of Authenticity AND a black light flashlight to experience the glow-in-the-dark feature.

As a legal tender offering by the Royal Canadian Mint, the obverse displays the right-facing effigy of Queen Elizabeth II, created by Susan Blunt. In keeping with the theme of the series, the background displays a highly unusual geometric pattern that visually seems to draw you ever deeper into the design. The obverse background can also change from one release to the next. The reverse presents the scene as described by eyewitnesses at the 1978 unexplained Clarenville event. The colorization is remarkably striking. The bright, yet eerie glowing light that witnesses described as surrounding the unidentified craft as it hovered above the water becomes visible on the coin when viewing under a black light. The single inscription, "CANADA" is displayed reversed out of the night sky at the upper right of the coin.

Obverse: Displays the right-facing effigy of Queen Elizabeth II, created by Susan Blunt. An unusual pattern is displayed in the background. Reverse: Features a colored scene as described by eyewitnesses at the Clarenville event.

Depicted is the unidentified craft hovering above the water as a bright eerie light emanating from the craft is reflected on the water below it. The single inscription, "CANADA" is displayed in the upper right corner. Very limited mintage of only 5,000 pieces for worldwide distribution.

Each coin comes in a distinctive black case with a Certificate of Authenticity, and includes a black light flashlight. Contains 1 troy oz of 99.99 fine silver in proof condition. This account of the event was compiled in an intriguing Wikipedia article: UFO Sightings in Canada. 1978, Clarenville, Newfoundland and Labrador. In October 1978, Constable Jim Blackwood of the RCMP witnessed a sighting of a flying saucer hovering over the harbour near the town of Clarenville and Random Island.

This was reported to him by local citizens. When he arrived at the scene the UFO was still present and quite visible.

He had a special high powered viewing scope which happened to be on loan at the time for other surveillance. The craft stayed in the area for approximately an hour and a half. When he switched on the roof lights of his police cruiser, the craft appeared to mimic the flashing lights. This made headline news at the time; it was broadcast on CBC television and NTV broadcasting in Newfoundland.

The craft took off like a shooting star high in the sky and disappeared. Two years after the incident, the BBC did a documentary on UFO sightings and included the Clarenville sighting in their broadcast. The item "2020 Canada Unexplained Phenomena Clarenville Silver Proof 1 oz" is in sale since Tuesday, October 13, 2020.

This item is in the category "Coins & Paper Money\Coins\ Canada\Other Canadian Coins". The seller is "boldpreciousmetals" and is located in Austin, Texas. This item can be shipped to United States, Canada, Australia, New Zealand, Bermuda.