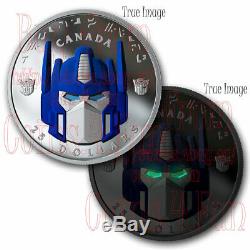 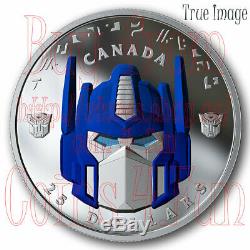 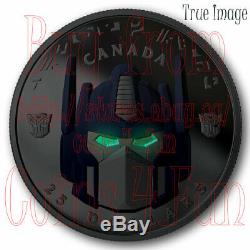 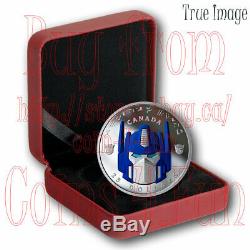 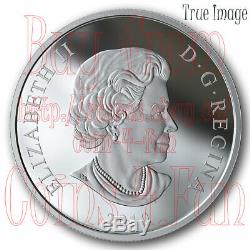 OPTIMUS PRIME, MEGATRON, BUMBLEBEE, STARSCREAM, JAZZ and moretheyre the TRANSFORMERS, an alien race of mechanical beings that can instantly change into alternate forms. These ROBOTS IN DISGUISE crash-landed on Earth millions of years ago, after their home planet of CYBERTRON had been devastated by war. Re-animated in a modern world, the two warring factions continue to clash, with the heroic AUTOBOTS fighting for freedom and justice against the evil DECEPTICONS.

Our salute to TRANSFORMERSand the homegrown talent behind the scenesfeatures the legendary hero and champion of peace, OPTIMUS PRIME. Through ultra high relief engraving, the face of the AUTOBOTS pushes out from the coins surface, where the characters name is inscribed in CYBERTRONIAN lettering. Weve also added a special feature for the fans: photo-luminescent technology to ensure the colourful eyes will glow. A stunning gift for a TRANSFORMERS fan! A pure silver OPTIMUS PRIME coin!

OPTIMUS PRIME practically pops out of the coin! The effect is made possible by ultra-high relief engraving, which gives the engraving a more pushed-out appearance. MORE THAN MEETS THE EYE! Paint technology re-creates the characters appearance in the 1980s, but glow paint brings the eyes to life.

INCLUDES THE ALPHABET OF CYBERTRON! The character's name (OPTIMUS PRIME) is engraved in CYBERTRONIAN letteringa nod to the characters fictional home planet. A SALUTE TO THE TOYS THAT LAUNCHED SEVERAL ANIMATED SERIES!

Includes those with a behind-the-scenes Canadian connection. The Royal Canadian Mint certifies all of its collector coins. 99.99% PURE SILVER COIN! Your coin features the engraved TRANSFORMERS insignia of the AUTOBOTS on both sides of the portrait head of OPTIMUS PRIME. The legendary leader and champion of peace appears to emerge from the coins surface thanks to ultra high relief engraving.

The deep colours are in keeping with the original toys and animated series from the 1980s, while glow paint hints at optic weaponry. The reverse includes the characters name (OPTIMUS PRIME) engraved in CYBERTRONIAN lettering, the word CANADA and the face value, 25 DOLLARS.

The obverse features the effigy of Her Majesty Queen Elizabeth II by Susanna Blunt. The TRANSFORMERS were first introduced to Canadians in 1984 with the launch of HASBROs original toy line. It was a multimedia franchise, with comic book tie-ins, an animated series, merchandising and a feature film. Canadian actor Peter Cullen was the voice of both OPTIMUS PRIME and IRONHIDE in the original television series.

The Canadian connection doesnt end there: several other incarnations were produced in Canada and/or featured Canadian animators and voice actors. Your coin is encapsulated and presented in a Royal Canadian Mint-branded clamshell with a black beauty box. I do leave feedback for everyone. The item "2019 TRANSFORMERS OPTIMUS PRIME with GLOW EYES $25 Pure Silver Proof Coin Canada" is in sale since Tuesday, August 13, 2019.

This item is in the category "Coins & Paper Money\Coins\ Canada\Commemorative".fun" and is located in Richmond Hill, Ontario.