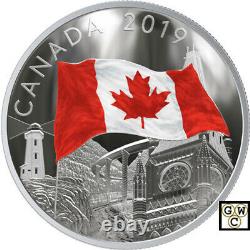 In a land of many, a symbol for all. Canadas iconic red-and-white flag first made its way up the flagpole on Parliament Hill at noon on February 15, 1965: a moment that was decades in the making. Canada started exploring the idea of replacing Great Britains Royal Union Jack with its own flag in the late 1800s. Though the issue was taken up by formal committees over the decades that followed, the project always seemed to stall.

In 1964, with Canadas centennial just around the corner, Prime Minister Lester B. Pearson set up the committee that ultimately chose the now-famous red maple leaf on a white square.

Queen Elizabeth II lent the design her formal proclamation on January 28, 1965, and it was inaugurated on February 15, 1965. Canadas flag has come to represent unity within diversitya trait Canadians take great pride in. Canada became the first officially multicultural country in the world in 1971, recognizing diversity as the foundation of its national identity. This aspect of Canadian identity is protected by law not only in the.

Today, more than 20 percent of Canadians are first-generation immigrants, representing the highest immigrant population among the G7 nations. From the shores of the Atlantic to the vast mountains of the Pacific Coast, diversity is a key thread running throughout the fabric of Canadian society. A gorgeous coin and an ideal gift for a Canadian! A ROYAL CANADIAN MINT FIRST! First-of-their-kind undulating obverse and reverse fields, along with selective application of colour, breathe life and movement into a design that celebrates Canada. CAPTURES THE DYNAMISM OF THE CANADIAN FLAG! A celebration of Canadas diverse people and landscapewoven together in the symbol that unites us all, the flag.

On the right side of the field is the pinnacle of the Peace Tower that rises above Centre Block on Parliament Hill. Between the two is a detailed image of Kicking Horse Canyon in the picturesque British Columbia interior. The obverse features the effigy of Her Majesty Queen Elizabeth II by Susanna Blunt. The undulating effect on this coin is a great example of what I love about my work as an engraver: Its a chance to explore new ways to enhance the beauty and uniqueness of a coin using advanced technology. Alex Tirabasso, Royal Canadian Mint 3D Artist and Engraver.

Royal Canadian Mint 3D Artist and Engraver, Alex Tirabasso, enjoys the collaborative dance that goes into creating a coin like The Fabric of Canada. Sometimes, he explains, the process starts with the product manager bringing us a design. We work according to Engineerings exacting standards to virtually engrave an intricate and well-designed piece around this artwork. But in other cases, the design is inspired by an exciting new capability, as with this unique new coin featuring struck undulations.

I had already been working with Engineering on the idea of carefully generating a sculptural ripple effect on a coin reverse, Alex explains. We knew it would be aesthetically pleasing and would lend itself well to coin designs that feature natural movementlike a fluttering flag. This beautifully designed coin features scenes from Canadas most beloved sites, including Peggys Cove, Nova Scotia; the Peace Tower on Parliament Hill in Ottawa; and Kicking Horse Canyon in eastern British Columbia. Peggys Cove is said to be named for St.

Margarets Bay, in which it is locatedbut there are other legends about the name. One involves a young girl named Margaret, the sole survivor of a shipwreck, who managed to swim to shore and was taken in by local residents. Peggys Cove is also famous for the Peggys Point Lighthousea world-famous heritage structure from 1868 that today is Canadas only lighthouse to house a Post Office.

Its one of Canadas most-visited tourist attractions. Parliaments neo-gothic Peace Tower was inaugurated in 1927 when the Centre Block of Parliament was reconstructed following the infamous fire of 1916. It is 91 metres high and holds a carillon of 53 bells.

Many of the Peace Towers features were designed to honour Canadians who served in the First World War. Kicking Horse Canyon, located in British Columbias Rocky Mountain Trench about 250 kilometres west of Calgary, is named after a real kicking horse. When the horse kicked James Hectoran explorer surveying the B. Interiorthe unfortunate gentleman was launched into the river below.

He survived and memorialized the moment by naming the river and the canyon Kicking Horse. Your coin is encapsulated and presented in a Royal Canadian Mint-branded clamshell with a black beauty box. Rebecca Yanovskaya (reverse), Susanna Blunt (obverse). The item "2019'The Fabric of Canada' Colorized Proof $30 Silver Coin 2oz.

9999Fine(18784)" is in sale since Monday, March 9, 2020. This item is in the category "Coins & Paper Money\Coins\ Canada\Commemorative". The seller is "gatewestcoins" and is located in Winnipeg, Manitoba.