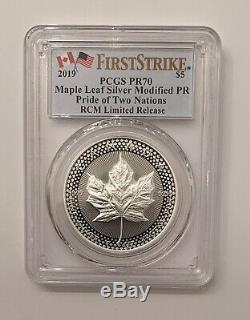 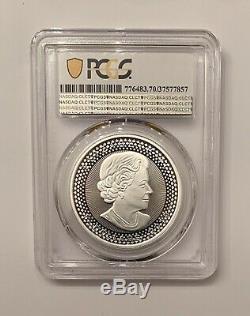 As of 8/5, only 382 coins have been graded PR70 First Strike with the RCM designation. Serial numbers will vary as multiple coins are available. To celebrate the two countries' independent spirit and long-standing partnership, the Royal Canadian Mint and United States Mint are proud to join together in presenting the 2019 Pride of Two Nations Limited Edition Two-Coin Set.

This beautifully rendered and unique special set commemorates Canada's and the United States' nationhood with coins that capture their rich history, pride, and close relationship as neighbors and partners. This first-ever two-coin set features a Royal Canadian Mint One Ounce Silver Maple Leaf Coin with a modified proof finish and a United States Mint American Eagle One Ounce Silver Coin with an enhanced reverse proof finish. A proof coin is one with the highest possible qualitya frosted image is struck against a brilliant background as many as three times to achieve an incredibly crisp impression with amazing detail. The inscriptions on a proof coin are normally frosted.

The inscriptions, however, have the same natural shine of silver as the other design elements instead of a frosted appearance, creating a "modified" proof finish. Both finishes were created specifically for the coins featured in this set. Only 10,000 sets available worldwide, released from the Royal Canadian Mint. PCGS encapsulation protects and guarantees the flawless condition of these coins. The obverse of the Silver Maple Leaf features the classic effigy of Her Majesty Queen Elizabeth II. The reverse features a maple leaf on a radial-lined background with a pattern of stars and maple leaves on the perimeter.

The Silver Eagle features Liberty in full stride with her right hand extended and branches of laurel and oak in her left. The reverse features the heraldic eagle with shield, an olive branch in the right talon and arrows in the left.