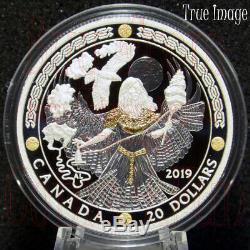 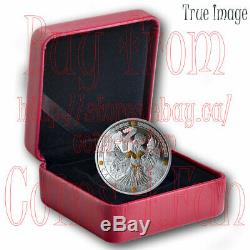 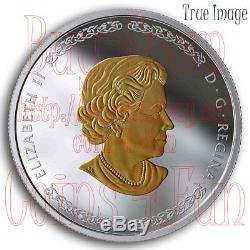 Trilogy ends with Frigg, Odin's beloved and mother of Baldr, and the inspiration for the English word Friday. A practitioner of Norse magic. , the Queen of the Æsir is the only other being who may sit upon Odin's high seat (Hliðskjálf) and look out at the cosmos. The goddess of family and fertility weaves the clouds and spins our fates. She knows the destiny of every being, but she will never reveal it. Frigg wears a coat of falcon feathers that allows her to take to the skya feature that is highlighted in this selectively gold-plated tribute. PART OF A THREE COIN SERIES! Frigg is the last of three coins dedicated to the powerful Norse gods. Your coin has selective gold plating on both sides. Your coin combines Norse art-inspired elements and a historic artefact frame both sides of your coin! Selective gold plating highlights Frigg's belt and her feather shawl, which allows her to assume the shape of her falcon companion. Also gold-plated are the falcon emblem of Frigg and the mistletoe that is associated with the death of her son Baldr. The Royal Canadian Mint certifies all of its collector coins. Limited to 3,500 coins worldwide. Your coin is crafted from one ounce of 99.99% pure silver. The reverse image by Alexandra Lefort emphasizes Frigg's role as the Norse goddess of the sky. The Queen of Æsir holds a distaff in one hand and a spindle in the other, as she weaves the clouds that float towards the full moon.

A Norse art-inspired pattern lines the rim on the antiqued obverse and reverse. The obverse features the gold-plated effigy of Her Majesty Queen Elizabeth II by Susanna Blunt. There are many similarities between Freya and Friggin fact, they are possibly two variations of the same worship. Frigg is also the goddess of the sky.

She is associated with the moon and the Orion's Belt constellation, also known as Frigg's Distaff, which is said to symbolize female wisdom. Enormous keys hang from Frigg's gold belt, which represents the goddess's ability to unlock all doors and possibilities. When her son Baldr had a dream that foretold his death, Frigg secured a promise from every being and element that no harm would come to her soneverything except the harmless mistletoe, which appears on this coin. Loki tricked Frigg into revealing Baldr's only vulnerability. He then fashioned a dart from mistletoe and convinced Höðr, Baldr's blind twin brother, to throw it at Baldr.

It pierced the god's heart and killed him instantly, sending Frigg deep into despair. She persuaded the Queen of the Underworld, Hel, to release Baldr's soul if every living thing wept for him, but his fate was sealed when the giantess Thökk refused to grieve. Your coin is encapsulated and presented in a Royal Canadian Mint-branded clamshell with a black beauty box.