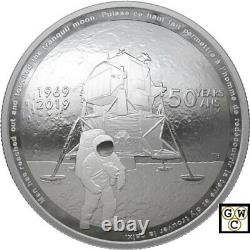 Now, we look back on this day as a milestone in human history, literally reaching for the stars. While the United States launched and landed the spacecraft, Canadians also have every reason to celebrate. In fact, many don't know that the landing gear for the Apollo 11 Lunar Module was designed by the Canadian company, Héroux-Devtek. Technically, Canadian technology was the first object of Apollo 11's mission to touch the Moon!

Canada's Prime Minister Pierre Elliott Trudeau, along with other world leaders, sent messages of goodwill for this historic mission. These messages appear on a silicone disc about the size of a US 50-cent coin that was left on the lunar surface. He wrote, Man has reached out and touched the tranquil moon.

Puisse ce haut fait permettre à l'homme de redécouvrir la Terre et d'y trouver la paix. May that high accomplishment allow man to rediscover the Earth and find peace. Your 99.99% pure silver coin celebrates the 50th anniversary of the Apollo 11 moon landing! Your coin has a convex shape, rounding the Moon to make it more tangible. The Apollo 11 Moon landing is a defining event in humanity's history and a landmark in Canadian engineering.

Your coin is marked with the memorable dates "1969" and "2019" and "50 years/ans" that have passed since the event. Héroux-Devtek, the Canadian company that contributed to the successful landing of the Apollo 11, is located in Longueuil - a suburb of Montréal, Québec. While the developing company is located in Québec, the primary designer behind the first moon landing gear was the Canadian engineer, Owen Maynard, born in Sarnia, Ontario.

50 years may not seem that long ago in history. The Royal Canadian Mint certifies all of its collector coins. 99.99% PURE SILVER COIN.

Designed by Canadian artist Tony Bianco, your coin features the iconic scene when humanity first set foot on the Moon, with the landing module towering in the background. It is marked with the memorable dates "1969" and "2019" and "50 years/ans" that have passed since the event. The message of peace written by Pierre Elliott Trudeau on a tiny silicone disk that was left on the Moon also appears on the edge of the coin.

The design features a rounded, convex shape reminiscent of the Moon. Your coin is encapsulated and presented in a Royal Canadian Mint-branded clamshell with a black beauty box.

The seller is "gatewestcoins" and is located in Winnipeg, Manitoba. This item can be shipped to Canada, United States.