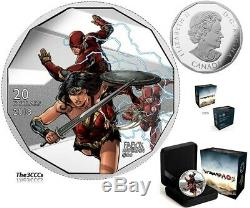 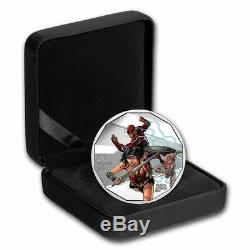 THE FLASH AND WONDER WOMAN THE JUSTICE LEAGUE. Fueled by his restored faith in humanity and inspired by Supermans selfless act, Bruce Wayne enlists the help of his newfound ally, Diana Prince, to face an even greater enemy. Together, Batman and Wonder Woman work quickly to find and recruit a team of metahumans to stand against this newly awakened threat. But despite the formation of this unprecedented league of heroesBatman, Wonder Woman, Aquaman, Cyborg and The Flashit may already be too late to save the planet from an assault of catastrophic proportions. AN RCM EXCLUSIVE: The coins reverse features original art by the lead artist of the flagship Justice League title: Canadian artist Jason Fabok! One of the industrys fast-rising stars, Faboks designs were created specifically for our coinsyou wont find these originals anywhere else! AN ALL-STAR TEAM-UP BEHIND THE SCENES: As with Justice League issues, colorist (and fellow Canadian) Brad Anderson has brought Faboks reverse designs to life in vibrant, comic book-worthy colour! CAPTURES THE SPIRIT OF THE FILM: A collectible tribute to the comic book-based characters of the eagerly awaited film The Justice Leaguebut with a proud made in Canada twist!

A MIX OF EFFECTS AND FINISHES: Special colour application creates the effect of a motion trail behind The Flash! In the background, laser engraving adds a frosted finish to the polygon shapes that form a shattered glass effect in the backgroundjust as they did on our previously released Batman v Superman: Dawn of JusticeTM coins! COLLECT ALL THREE 1 OZ COINS: Place them side-by-side and in orderWonder Woman/ The Flash, Cyborg/ Superman, Aquaman/ Batman to see how the shattered glass effect unites them all as a larger design, like individuals coming together to form a whole!

Exclusively designed by Canadian comic book artist Jason Fabok, the original art on the reverse features two members of the Justice League in an action pose. Rushing forward towards the viewer, Wonder Woman wields her sword and shield, ready to counter any threat.

The Flash joins in the rush behind her; tapping into the Speed Force, the speedsters movements are so fast that they generate a visible blue lightning that surrounds him. Faboks artwork is brought to life by the rich, vibrant colours of Canadian colorist Brad Anderson, with a special colour application that creates the effect of an ethereal motion trail behind The Flash. In the background, the frosted look of laser-engraved polygon shapes creates a shattered glass effect that adds to the feeling of movement within the design, while providing an element of continuity to all three 1 oz. No: 162304 Mintage: 7500 Material: Pure Silver (99.99%) Finish. Weight: 31.83g Diameter: 40mm Edge: Serrated Certificate: Serialized Face Value.

This item is in the category "Coins & Paper Money\Coins\ Canada\Commemorative". The seller is "shockwaves-the3cccs" and is located in Oshawa, Ontario. This item can be shipped worldwide.