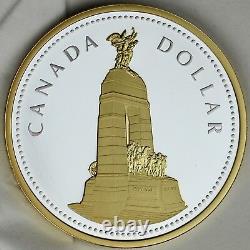 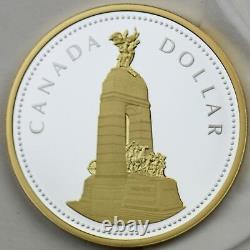 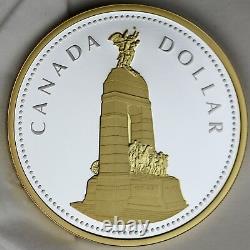 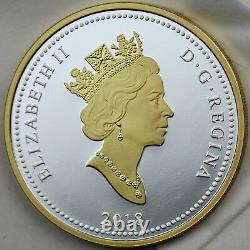 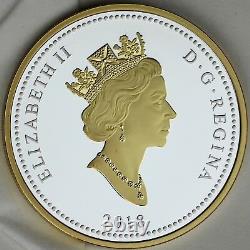 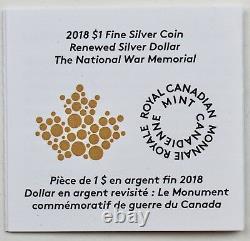 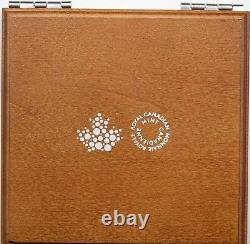 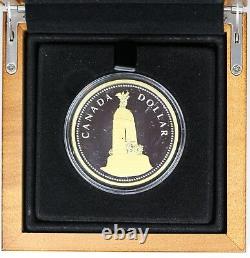 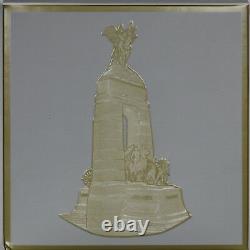 Face Value - 1-dollar (a legal tender Canadian coin). Artists: Dora de Pédery-Hun (reverse). The fourth coin in this series is based on 1994 proof dollar design featuring the National War Memorial. Titled The Great Response of Canada, the Memorial honors the sacrifice made by Canadian service personnel in times of war. It presents 22 bronze figures, representing roles from across Canadas armed services, passing through a great granite arch. Angelic figures symbolizing peace and freedom look down from atop the arch. The Memorial stands on a high granite pedestal. In 2000, the remains of an unknown Canadian soldier recovered from a cemetery near Vimy Ridge in France were interred in a tomb at the foot of the memorial.

The Mint makes this iconic proof dollar available only to members of the Masters Club. LOW MINTAGE OF 4,000! A low mintage of 4,000 coins means this 2 oz. Pure silver coin will be highly sought after. SELECTIVE 99.99% GOLD PLATING ON BOTH SIDES!

The coin is beautifully enhanced by selective gold plating on both sides! FEATURES EFFIGY THAT APPEARED ON THE ORIGINAL PROOF DOLLAR! The obverse design features the effigy of Her Majesty Queen Elizabeth II by Dora de Pédery-Hunt that appeared on the original proof dollar! This coin is ready to display in its limited-edition wooden case and comes beautifully packaged in an attractive graphic beauty box.

The Royal Canadian Mint certifies all of its collector coins. TWO-OUNCES 99.99% PURE SILVER! For our Canadian customers, this coin is GST/HST exempt.

This coin presents Canadas National War Memorial as viewed from the southwest corner of Confederation Park. The vertically oriented design underscores the magnitude of the more than 21-meter tall cenotaph. The Memorial is plated in gold. The obverse design features the effigy of Her Majesty Queen Elizabeth II by Dora de Pédery-Hunt that appeared on the original proof dollar. Her Majestys effigy is also plated in gold. The National War Memorial was originally commissioned in 1925 as a competition open to all British subjects worldwide. It garnered 127 entries from Canada, France, England, Belgium, Scotland, Trinidad, Belgium, and the United States. The winner was English sculptor Vernon March, who had completed other memorials for Canada. When Vernon March died unexpectedly during the sculptures construction, his brothers and sister completed his work. The Memorial was unveiled by King George VI in 1939 in honor of those who served during the First World War.

It was rededicated in 1982 to include the Second World War and the Korean War and again in 2014 to include the South African War and the Afghanistan mission. Each year at the annual Remembrance Day Ceremony on November 11, national attention is fixed on the Memorial as Canadians remember wartime sacrifice during a moment of silence. The Memorials symbolism has evolved since it was first unveiled in 1939 specifically to honor Canadians who served in the First Word War. As the years have passed and Canadians continued to serve in the times of war that followed, the meaning of the monument has grown to encompass the sacrifice of all Canadian Armed Forces members during times of war. Beautifully presented in a Royal Canadian Mint branded wooden box, lined with black flocking and including a removable insert and special certificate compartment.

Surface areas that appear black on some proof coin photos are actually highly polished, mirror-bright metal reflecting the color of the camera. We often include proof coin photos with the coin slightly tilted to better depict the mirror bright surfaces. However, tilting the coin may result in one side being slightly out of focus.

Please review all of the photos provided to obtain the best understanding of the coin's actual appearance. Whenever possible, we use actual photos of our coins, rather than just stock artwork from the Mint. We frequently update and upgrade the photos that appear with our listings, using improved cameras and lenses and better lighting. We will honor your requests for additional photos as quickly as our schedule permits. The item "2018 Renewed $1, National War Memorial Masters Club 2 oz. Pure Silver Proof Coin" is in sale since Thursday, November 15, 2018.