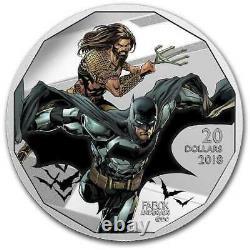 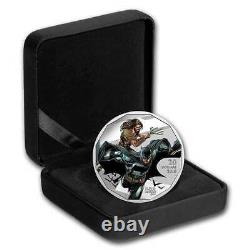 This release is one of three spectacular 1 oz Silver coins featuring original designs by Jason Fabok, the lead artist of DC Comics' flagship Justice League title. Fueled by his restored faith in humanity and inspired by Superman's selfless act, Bruce Wayne enlists the help of his newfound ally, Diana Prince, to face an even greater enemy. Together, Batman and Wonder Woman work quickly to find and recruit a team of metahumans to stand against this newly awakened threat. But despite the formation of this unprecedented league of heroes-Batman, Wonder Woman, Aquaman, Cyborg and The Flash-it may already be too late to save the planet from an assault of catastrophic proportions.

Coins come in a mint-issued premium presentation case with a certificate of authenticity. Limited mintage of only 7,500 coins. Obverse: Displays the likeness of Her Majesty Queen Elizabeth II. Reverse: With arms outstretched wide, Batman is followed closely by a flurry of bats in flight and by the trident-wielding Aquaman.

Both are wearing alternate versions of their iconic costumes: Batman is in an upgraded costume equipped with tactical armor and goggles while the tattooed Aquaman has eschewed full garb in favor of shoulder armor and forearm guards. Fabok's artwork is brought to life by the rich, vibrant colors of Canadian colorist Brad Anderson, while a special color application adds a water effect to Aquaman's appearance and a leather effect to Batman's costume. In the background, the frosted look of laser-engraved polygon shapes creates a "shattered glass" effect that adds to the feeling of movement within the design, while providing an element of continuity to all three 1 oz coins in this collection. Guaranteed by the Royal Canadian Mint.

By combining vivid and meaningful packaging with an inspired coin design, this series is an excellent introduction for comic book fans to the world of coin collecting. Collect all three 1 oz coins: Place them side-by-side and in order-Wonder Woman/ The Flash, Cyborg/ Superman, Aquaman/ Batman -to see how the shattered glass effect unites them all as a larger design, like individuals coming together to form a whole! This item is in the category "Coins & Paper Money\Coins: Canada\Commemorative". The seller is "enchantedcoins" and is located in this country: US. This item can be shipped to United States, Canada.