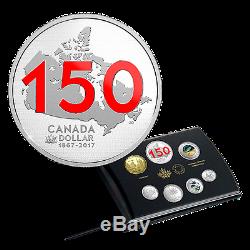 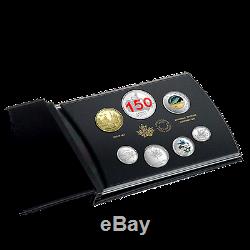 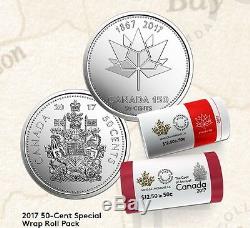 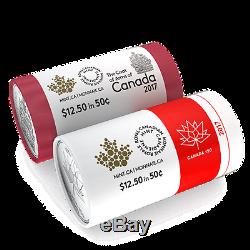 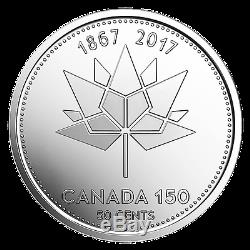 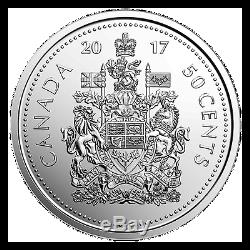 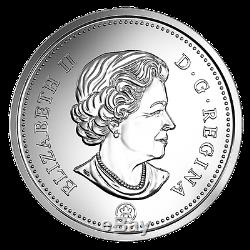 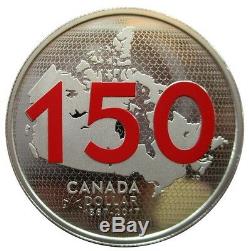 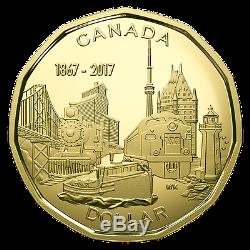 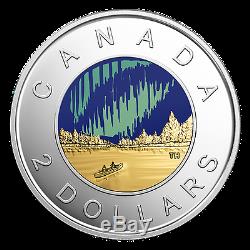 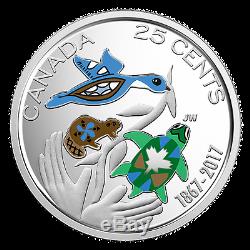 Add on expression of Canadian pride to your collection with the Limited Edition Silver Dollar Proof Set. This affordable seven-coin set brings together frosted versions of the My Canada, My Inspiration circulation coins and a Limited Edition Proof Silver Dollar. It represents a collectible celebration of Canada, and a powerful representation of what it means to be Canadian in 2017! Canada: these are your coins. Designed by Canadians for Canadians, these powerfully symbolic coins are a proud representation of who we are as a nation in 2017!

You wont see these together again! This is the ONLY proof set to include the 2017 Limited Edition Proof Silver Dollar AND frosted versions of the My Canada, My Inspiration circulation coins that are exclusive for 2017. Your ONLY opportunity to own the Limited Edition Proof Silver Dollar: The reverse features red colour over the engraved 150, and a contemporary background comprised of thousands of engraved maple leaves. The repeating pattern gives the design more depth, but also creates the impression that youre viewing Canada on a globe! The perfect way to preserve the memories and the spirit of this celebration for years to come!

The 50-cent coin features the official CANADA 150 logo, whose maple leaf mosaic represents Canadian Confederation. Cutting-edge technology meets craftsmanship: Innovative technologies bring these designs to life in an unprecedented way! You can feel the deep sense of pride behind each of these coinstruly a heartfelt ode to Canada and Canadians! All coins are beautifully presented in book-style packaging made of genuine leather!

Its an elegant way to protect and showcase these coins as a treasured part of your collection! Designed by Canadians for Canadians, the engraved images on each reverse are exclusive for Canadas 150th anniversary yearincluding those of the five circulation coins from the My Canada, My Inspiration collection. Coin, Dance of the Spirits, celebrates the wonders of Canada through its depiction of paddlers gliding across a placid lake under the shimmering curtain of the aurora borealis.

Circulation coin, Connecting a Nation, pays tribute to the railways that have brought our country togetherand the many impressive landmarks along Canadas rail routes. The 25-cent coin, Hope for a Green Future, shares a childs hope for Canadas abundant nature to be preserved for years to come, through a pair of hands that bring life to a plant that connects all living things.

The 10-cent coin, Wings of Peace, captures our spirit of peacekeeping in a stylized design featuring an iconic maple leaf in the beak of a dove. The 5-cent coin, Living Traditions, reimagines the quintessential Canadian beaver in the traditional style of the northeastern woodland Algonkian tribes, thus celebrating 150 years of cultures meeting, sharing and evolving together.

The set also includes a 50-cent coin bearing the official CANADA 150 logo of a maple leaf mosaic, and the sets centrepiece: a limited edition 99.99% pure silver proof dollar. Designed by Canadian artist Jamie Desrochers, the background features an engraved micro-pattern of thousands of maple leaves that are curved to create the feeling that the coin is a globe, along with a map of Canada to bring the focus on our nation.

Engraved above it is the number 150, whose large size conveys the significance of this milestone year, while the application of red colour echoes that of our nations flag. The obverse features the effigy of Her Majesty Queen Elizabeth II by Susanna Blunt. No: 159428 Mintage: 25,000 Material: See Image Finish: See Image Weight: See Image Diameter: See Image Edge: See Image Certificate: Serialized. Celebrate Canadas 150th with this must-have pack of two specially wrapped rolls of coins you wont find in your pocket change. It features two versions of the rare and tradition-rich 50-cent coin: the timeless design featuring Canadas official Coat of Arms, alongside another one bearing Heritage Canada's official CANADA 150 logo!

Only twice in its history has the 50-cent coin featured a special commemorative design, and you can be the proud owner of the third special-issue in 80 years! It features the winning design from Canadian Heritages contest that invited Canadian students to create a logo for Canadas 150th anniversarythe first public design to ever appear on this denomination! These coins are not available in circulation and can only be acquired as special keepsakes like this one. Includes two special wrap rolls of the 50-cent coin in two designsthe traditional Coat of Arms design plus the special CANADA 150 issue! Each coin roll includes twenty-five 50-cent coins in a special commemorative wrap. Limited to 35,000 packs worldwide and highly collectible!

Share the pride and bring a unique touch of prestige to your CANADA 150 celebration! Largely unchanged since 1959, the reverse design of Canadas classic 50-cent coin features the Canadian Coat of Arms. The history of our nation is powerfully conveyed through each of the richly symbolic elementsparticularly within the shield, where a sprig of maple leaves represents Canadians of all origins while the upper portions honour the founding nations.

On one side, a lion holds a lance with the Union Jack; on the other, a unicorn holds the royal flag of France. Saint Edwards crown above the crowned lion represents the monarch as Canadas Head of State, while beneath it all, a scroll reads Canadas unifying motto, A MARI USQUE AD MARE (From Sea to Sea). On the reverse of the special commemorative issue, Ariana Cuvin of Toronto (Ontario) has transformed a maple leaf into an eye-catching mosaic representing Confederation. The four diamond shapes connected to the stem symbolize the original provinces that formed Confederation in 1967 (Ontario, Quebec, New Brunswick, Nova Scotia), while the remaining 9 shapes represent the provinces and territories that followed. Combined, they form the iconic symbol that represents unity, freedom and peace for people around the worldan ideal that is now 150 years proud!

Paired with the classic design featuring the Coat of Arms of Canada, the commemorative issue bears Canadian Heritages official CANADA 150 logo by Ariana Cuvin of Toronto (ON). Four diamond shapes connected to the stem symbolize the original provinces of Confederation, while the 9 shapes represent the provinces and territories that followed. 50¢ Coat of Arms of Canada. Paired with the commemorative issue which bears the Canadian Heritages official Canada 150 logo, the reverse design of Canadas classic 50-cent coin features the Canadian Coat of Arms. The history of our nation is powerfully conveyed through each of the richly symbolic elements.