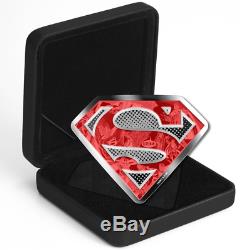 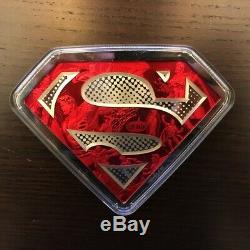 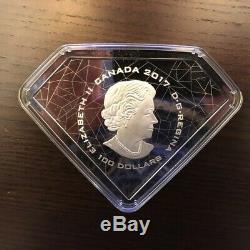 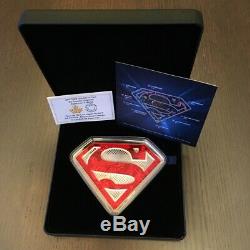 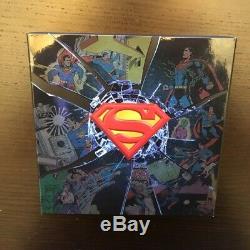 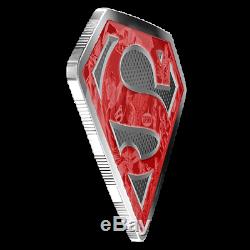 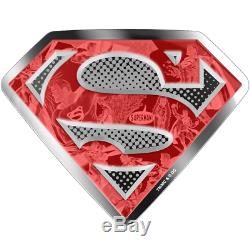 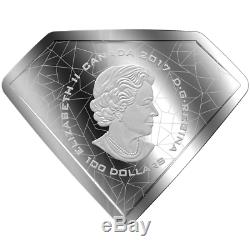 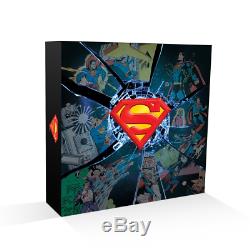 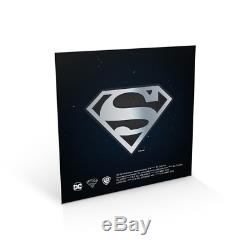 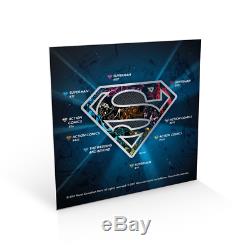 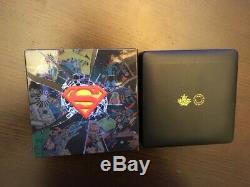 Directly from Royal Canadian Mint! Encapsulated with COA & case/box, etc. A MINT FIRST: SHAPED LIKE SUPERMAN'S SHIELD! T is the ultimate re-creation of a near-universal symbol for hope: Superman's iconic emblem leaps off the pages and into your collection with this S-Shield-shaped coin! The image is unmistakable, thanks to the application of red enamel along the "S".

Take a closer look: the bold colour is. Revealing a collage of comic book action scenes that chart Superman's evolution through the ages, and all engraved in incredible detail! This shield-shaped coin is the. Addition to your Superman collection!

A MINT FIRST: A COIN SHAPED LIKE SUPERMAN'S SHIELD! This diamond-shaped coin is the ultimate addition to your Superman coin collection! The use of transparent enamel allows the engraved collage of action shots to show through the S-Shield's iconic red sheen.

Canadian creators Jason Fabok, Darwyn Cook, David Finch and Tom Grummett have all helped to shape Superman's history as artists/writers. 10 OUNCE 99.99% PURE SILVER COIN! Your coin is designed using 10 ounces of 99.99% pure silver, and includes transparent enamel! As well, your coin has no GST/HST! Only 1,500 coins will be made worldwide.

The reverse design of this "diamond"-shaped coin features an engraved rendition of Superman's shield. Within the "S" of the shield, scenes from several. Comic books are positioned as a unique collage that highlights Superman's long and illustrious history; this visual journey through Superman's different looks and eras is carefully covered by transparent enamel, which allows the engraving to peer through the red sheen of the "S". A laser halftone pattern behind the shield adds a graphic element that fills the background and infuses design with a classic comic book feel. The obverse features the effigy of Her Majesty Queen Elizabeth II by Susanna Blunt and the words "CANADA", "2017" and "100 DOLLARS".

Established with firm Canadian roots, Superman was the first. To define a genre that has spawned countless characters in the. He was the inspiration for a new archetype that not only exists today, but is arguably more popular than ever. Canadian visionaries such as Jeff King and David Finch continue to shape Superman, by lending their talents as storytellers and further adding to the history and legacy of this international icon.

Superman is the most powerful being on the planet, thanks to an astounding array of super powers that include strength, flight, invulnerability and even heat vision. Yet, these same abilities are also a constant reminder of how different he is from the people he is dedicated to protect. In fiction and in reality, the. Is a near-universal icon whose shield has become one of the most recognisable symbols in the worldone that transcends political boundaries, languages and cultures to inspire hope by representing truth and justice for all. Superman's first appearance in 1938 preceded.

Making her Superman's longest-running supporting character! Your coin is encapsulated and presented in a Royal Canadian Mint-branded standard case with a graphic beauty box. The item "2017 Canada $100 DC Comics Originals Superman's Shield Pure Silver Coin" is in sale since Thursday, March 7, 2019. This item is in the category "Coins & Paper Money\Coins\ Canada\Other Canadian Coins". The seller is "boykinsunru" and is located in .