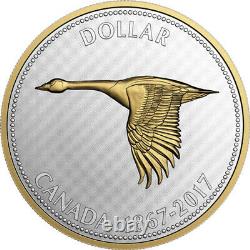 2017 5-OUNCE FINE SILVER COIN - BIG COIN SERIES - ALEX COLVILLE DESIGNS: 1 DOLLAR. Designed by acclaimed Canadian artist Alex Colville, the 1967 Canadian Centennial circulation coins remain a powerfully symbolic representation of the Canadian spirit, even as the nation celebrates its 150th anniversary. This elegant commemorative series of 5 oz. Fine silver coins concludes with a recreation of the 1967 one-dollar coin, which has been beautifully enhanced with selective gold plating. The reverse re-creates the unforgettable 1967 one-dollar circulation coin design by Canadian artist Alex Colville, and features the side profile of a Canada goose in flight. Detailed engraving re-creates the goose's features and the texture of its flight feathers, as it flaps its wings downwards while soaring over this land. The image is enhanced by the application of selective gold plating over the goose and along the rim. The obverse features selective gold plating on the second effigy of Her Majesty Queen Elizabeth II by Arnold Machin. FIRST coin in an unforgettable series that celebrates Canada's 150th anniversary and the 50th anniversary of the 1967 Canadian Centennial circulation coins. Never before have these iconic designs been featured in 99.99% pure silver-and on a much larger scale (65.25-mm diameter)-uniquely enhanced with stunning gold plating selectively applied to the reverse and obverse. The proof finish is gorgeously enhanced with modern polishing techniques that highlight the meticulous engraving of each subject. For added historical authenticity, the obverse features the second effigy of Her Majesty Queen Elizabeth II, as it appeared on the original coins. An eye-catching addition to any Canadiana-, history-themed or circulation coin collections. A great opportunity to revisit a proud moment in our history while celebrating another key milestone!

The seller is "gatewestcoins" and is located in this country: CA. This item can be shipped to Canada, United States.