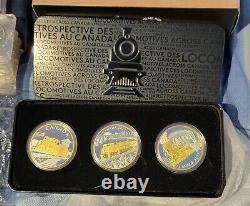 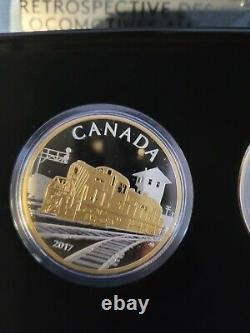 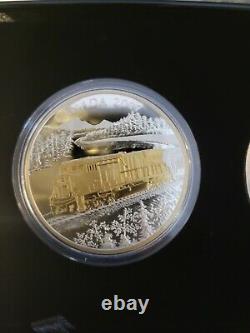 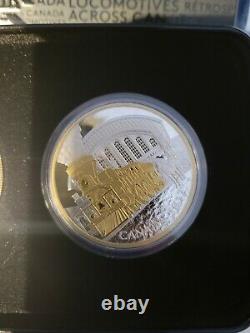 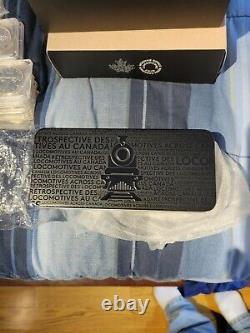 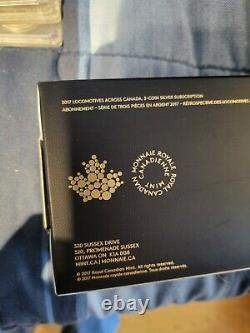 INCLUDES BEAUTIFULLY EMBOSSED METAL TIN DISPLAY CASE! Like modern engines of change, the locomotives of Canada have been instrumental in shaping our nation throughout its 150 years of history.

These steam- and diesel-powered vehicles were at the heart of Confederation; helped link two of Canada's coasts; opened up the west to new settlement, and laid the foundations of the multicultural society Canadians enjoy today. They have had an impact on all aspects of Canadian life; by transporting people and goods across this vast nation, the engines featured in the Locomotives Across Canada series of coins represent a historical snapshot of a nation coming into its own, helped by a spirit of innovation that persists today! An ideal 3-coin gift for any train enthusiast!

Coins in your subscription include. Even the finest details shine in each meticulous design, thanks to the precision engraving, and the use of multiple finishes that add subtle contrasts.

The selective application of gold plating shines the spotlight on each locomotive, while the gold-plated effigy ensures an elegance that makes this a truly exceptional keepsake. FREE EMBOSSED METAL TIN DISPLAY BOX! Order the subscription and receive a FREE embossed metal tin box with your third coin to display all three coins!

LIMITED MINTAGE: Only 7,500 coins will be made available worldwide. Hurry and order yours today before they are all gone! ONE-OUNCE 99.99% PURE SILVER COINS! Your coins have no GST/HST! First coin: The 4-4-0 locomotive.

Designed by Canadian artist David A. Oram, the first coin in your subscription transports you to Toronto, ON, in the year of Confederation: 1867. The selective application of gold plating immediately draws the eye to the 4-4-0 locomotive of the Great Western Railway (GWR) in the foreground. The left-side three-quarter view allows for a thorough examination of the steam engine's defining characteristics-from the balloon smoke stack and large driving wheels to the cattle guard-all rendered in outstanding detail. In the background, the arched train shed of GWR's Yonge Street passenger station adds an architectural point of interest, while the horse-drawn carriage waiting trackside completes this meticulously engraved snapshot of a bygone era.

On track to Confederation-and beyond. Named for its wheel configuration of four leading (front) wheels and four driving ones, the iconic 4-4-0 "American" type of locomotive looms large in Canada's railway history as the quintessential all-purpose locomotive of its time. The height of the 4-4-0's popularity coincided with Confederation-a time when Canadian union hinged on the promise of a railway link, which was fulfilled in the east with the completion of the Intercolonial Railway in 1872.

By then, the 4-4-0 represented the overwhelming majority of the steam locomotives in service, including those that helped open the continent to new settlement in the west. Design adjustments and a larger boiler size resulted in more powerful 4-4-0 engines; but tasked with increasingly heavier loads, the 4-4-0's limited firing capacity eventually led to its falling out of favour when larger engines (such as the Ten-Wheelers) entered the fray. Canada's love for railroads began with the first railway constructed in 1836: the Champlain and Saint Lawrence Rail Road.

Prior to 1853, all locomotives in British North America were imported from the United States or from Great Britain. On April 16, 1853, the Toronto Locomotive Work completed work on the first locomotive built in Canada: a 4-4-0 steam engine known as the Toronto. Second coin: The RS 20 locomotive.

Designed by Canadian artist John Mantha, your coin looks back at the first wave of diesel-electric locomotives that were introduced in Canada in the 1940s and 1950s. Used by the Roberval and Saguenay Railway, the RS 20 was the first diesel road locomotive manufactured in Canada, and was built in 1949 by Montreal Locomotive Works. The selective application of gold plating places the focus on the early RS-2 road-switcher, which is made all the more visible thanks to the tiger-striped pattern, painted at the front. The rail yard in the engraved background is bustling with activity, and typifies the environment in which these versatile workhorses shine. The early 20th century saw a rapid expansion of new railways across the country, and in areas further north than ever before.

Trains had become the backbone of industry in Canada, allowing an easy flow of goods and services while transporting an unprecedented wave of immigration to regions that were once remote. The railway companies also spurred a budding tourism industry, by building resort hotels and launching campaigns that touted Canada's great natural beauty to the travellers of the world. But the First World War marked a period of great change in Canada's railway history. Steam locomotives continued to sustain Canada's economy while supporting the war effort by transporting troops; but the limited availability of trainmen, a reduced ridership, and unrestrained expansion exacerbated the financial problems of many Canadian railways.

Gone was the great era of railway construction; decades later, the golden age of steam railways was itself relegated to the history books with the advent of a new technology: the diesel locomotive. The first diesel-electric locomotive used in Canada, CNR 9000, was built in 1929 from coupled engines that could each generate 950 kW of power and weighed a combined 335 tonnes. Until the end of the Second World War, most of Canada's diesel locomotives were low-powered engines.

Diesel-electric technology was largely used in submarines during the war, but was gradually extended to railways during the post-war period. By 1960, steam locomotives were no longer used by either CNR or CPR for regularly scheduled service. The diesel engine doesn't directly move the wheels that propel the locomotive forward-it drives an electrical generator, which powers the traction motors that make the wheels turn. The tiger-like stripes on the front of a locomotive are deliberately painted to improve the locomotive's visibility. Third coin: The GE ES44AC locomotive. In keeping with the first two coins in the series, this reverse design by Canadian artist John Mantha features selective gold plating that shines the spotlight on the General Electric ES44AC locomotive. The background features an outstanding amount of engraved detail that captures the majesty of Canada's diverse landscape: from the far-off mountain peak to the different textures of the surrounding vegetation, down to the gravel along the railroad ties.

The shine of the coin's silver surface also lends itself well to evoking the brightness of a summer day-in the sky, and on the surface of the winding river beneath it. Rounding the curves in the track, the gold-plated ES44AC locomotive is positioned in a way that allows for an ideal view of its front and side. The remarkable power of this fuel-efficient locomotive is evident in an almost endless line of railcars that stretch out behind it. Your coins are each encapsulated and presented in a beautiful embossed metal tin that complements the theme and adds a sense of nostalgia to this collecting experience. After purchasing your first coin, you will automatically receive the subsequent coins when they are released.

Coins may not be issued in the same order as listed herein. Oram (first coin), John Mantha (second areverse), Susanna Blunte. This item is in the category "Coins & Paper Money\Coins: Canada\Commemorative". The seller is "funcanadiancoincc" and is located in this country: CA.