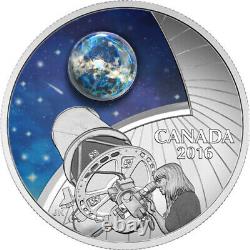 Canadian amateur astronomers using the Burke-Gaffney Observatory made a remarkable discovery in 1995 when they identified a supernova in a galaxy about 70 million light years away-the first such discovery made from within Canada. Such a powerful and colourful explosion is a rare celestial event, as the dying star expires in a burst of bright light and expelled energy; it is a truly breathtaking sight to behold, one of great ethereal beauty in a universe that still holds so many secrets! The engraved reverse by Canadian artist Joel Kimmel re-creates the dome of the Burke-Gaffney Observatory located at Saint Mary's University in Halifax, Nova Scotia, where a student looks through the observatory's telescope.

Against the softly coloured glow of a clear, star-filled night sky, a unique glass insert captures the otherworldly beauty of a supernova crafted by borosilicate artist Loïc Beaumont-Tremblay. The crystal-clear globule of boro glass contains an opal that represents the dying star, which is meticulously positioned over a darkly coloured background and surrounded by wisps of swirled glass and glow-in-the-dark colours. There is a remarkably luminous quality to the insert that conveys this stellar explosion of light and energy, which could easily outshine the glow of its own galaxy-even if only temporarily. An unforgettable combination of detailed engraving and vibrant colour, with a handcrafted borosilicate glass insert combined with glow-in-the-dark glass that makes each coin truly unique! Added luminescence within the glass captures the lights and colours associated with a supernova-a stunning effect that also adds a shine to the reverse's star-filled sky. An outstanding keepsake for stargazers, astronomers, outdoor enthusiasts and anyone who has ever marvelled at the beautiful mysteries of the universe. A celebration of the Burke-Gaffney Observatory's distinction as one in a select group of observatories to have discovered a supernova, which is a source of pride for the passionate stargazers of Atlantic Canada. With its innovative features, its beautifully rendered artistic design and a limited mintage of only 8,500 coins worldwide, this coin is sure to be sought after. Composition 99.99% pure silver. Finish Proof, color and borosilicate glass. Artist Joel Kimmel and Loïc Beaumont-Tremblay. Packaging Maroon clamshell with black beauty box. Finished size 88 mm x 88 mm. LAUNCH DATE: November 3, 2015. This item is in the category "Coins & Paper Money\Coins: Canada\Commemorative". The seller is "gatewestcoins" and is located in this country: CA. This item can be shipped to Canada, United States.