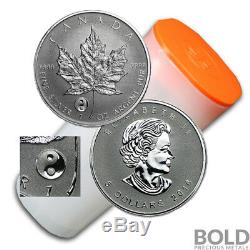 2016 Silver 1 oz Canada Maple Leaf Yin Yang Privy (25 Coins). The Silver Maple Leaf stands as one of the most highly respected investment bullion coins on the global market. Since its introduction in 1988, investors have actively relied on the consistency of its performance. Not only so, there have also been major strides to provide greatly enhanced anti-counterfeiting security features integrated into each coin. RCM's Maple Leaf is recognized as one of the most secure bullion coins available.

Interestingly, the traditional black yin aspect is represented with the frosted finish, and its eye with the mirrored. The finishes are reversed for the yang aspect.

This effect is heightened by the overall frosted background. The obverse also features the reverse-proof, allowing Queen Elizabeth's portrait to glisten beautifully against the frosted background. Yin and Yang are, in Eastern thought, the two opposite yet complimentary forces that make up all aspects of life.

Both sides yield to one another and push into each other illustrating the dependence of each upon the other. 2016 Silver 1 oz Canada Maple Leaf Yin Yang Privy. Contains 1 troy oz of.

Limited mintage of only 50,000. Obverse: Proudly features the right-facing profile of Queen Elizabeth II in reverse-proof brilliance, along with the year and face value. Reverse: Displays the iconic Canada maple leaf struck in reverse-proof, mirror brilliance against a frosted background.

The featured Yin Yang privy mark is beautifully represented in the contrasting reverse-proof finish. It is located to the left of the leaf's stem.

Inscriptions include the coin's weight and purity. Sovereign coin backed by the Canadian government. The Canada Silver Maple Leaf (SML) continues to be one of the most highly sought-after bullion investment coins in the world. The SML is struck in. 9999 fine silver at 1 troy ounce (31.11 grams), and has the highest face value on the market for any comparable silver bullion coin.

All Silver Maple Leaf's produced from 2014 forward have unique features for enhanced security, also increasing their global popularity. The Silver Maple Leaf is not only held for its investment value. This beautiful bullion coin is also followed by collectors of fine bullion coins. With each annual release, collectors quickly add to their SML holdings.

The coin's simple elegance proudly presents a stunning and iconic emblem of Canada, the maple leaf. The first security feature includes a small textured maple leaf, micro-engraved with laser technology on the reverse side.

It displays the last two digits of the release year. A second visual security feature includes the radial lines in the Silver Maple Leaf's field. They have been precisely machined to within microns on the master tooling to ensure reproducibility from die to die and coin to coin. The uniqueness of the line width and pitch gives a characteristic look, creating a light-diffracting pattern specific to this coin. These features combined represent the true cutting-edge of coin security.

A third security feature is now available for both the silver and gold Maple Leaf's. Marketed by RCM as, "Bullion DNA, " this feature provides a near instantaneous authentication of individual Maple Leaf's that have the micro-engraved maple leaf privy mark. As described by the mint. Every die used to produce the Gold and Silver Maple Leaf coins is laser micro-engraved with an anti-counterfeiting security mark: a textured maple leaf.

This item is in the category "Coins & Paper Money\Coins\ Canada\Other Canadian Coins". The seller is "boldpreciousmetals" and is located in Austin, Texas. This item can be shipped to United States.