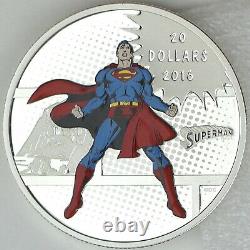 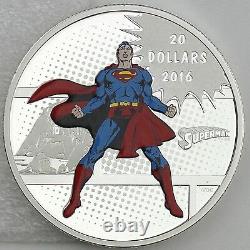 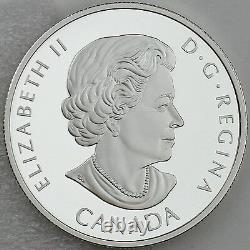 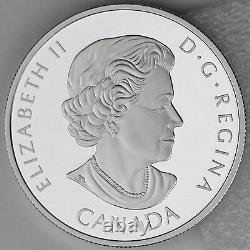 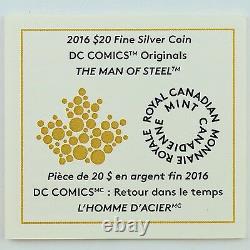 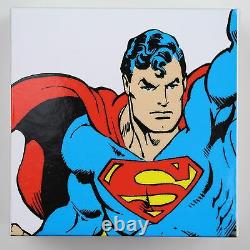 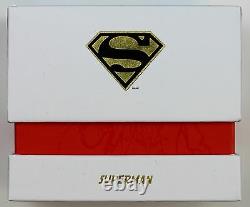 He was the inspiration for a new archetype that not only still exists today, but is more popular than ever. Many important Canadian visionaries continue to shape the DC COMICS Universe even today, lending their talents as storytellers and further building on the history that began in 1938. This coin makes a wonderful gift for any fan of comic books! Canadian superstar creators Jason Fabok, Darwyn Cooke, and Tom Grummett have all helped to shape Superman's history as artists/writers!

FIRST COIN IN THE SECOND WAVE OF DC COMICS ORIGINALS SERIES! A tribute to DC Comics' greatest SUPER HEROES presented in their classic form! The application of blue, red, and yellow color over the detailed engraving recreates his iconic costume and S-Shield as his red cape swirls around him with each movement.

INCLUDES THE FORTRESS OF SOLITUDE! On the left, the Silver-Age Fortress of Solitude rises up behind SUPERMAN. The classic SUPERMAN telescopic logo is also included in the coin's design. A laser halftone pattern adds a modern graphic element that fills the background while infusing the entirety of the design with a classic comic book feel.

99.99% PURE SILVER COIN! For our Canadian customers, this coin is GST/HST exempt! This coin's design mimics a comic book splash page with its engraved rendition of SUPERMAN.

Standing with legs apart and fists clenched, SUPERMAN radiates strength and resolve as he lifts his eyes to the skies. Superman's first appearance in 1938 preceded Batman's by only one year. Lois Lane appeared alongside SUPERMAN in Action Comics #1, making her Superman's longest-running supporting character. Superman's pal, Jimmy Olsen, had his own DC Comics title in the 1950s. Each coin is encapsulated and presented in a Royal Canadian Mint-branded premium graphic case.

Unsearched All of the coins offered in this listing are unsearched. Many coin dealers search all coins when they are received from the Mint. They "cherry-pick" the best coins. Then submit them to be graded, certified, and slabbed by PCGS, NGC, ANACS, etc. When a dealer searches coins, those that they sell in original Mint packaging are only lesser quality coins. Photos: When a listing offers multiples of the same coin, one coin is picked at random and photographed.

Since all coins offered in that listing are essentially identical, the coin photographed is representative of all coins offered. Surface areas that appear black on some proof coin photos are actually highly polished, mirror-bright metal reflecting the color of the camera. We often include proof coin photos with the coin slightly tilted to better depict the mirror bright surfaces. However, tilting the coin may resulting one side being slightly out of focus.

Whenever possible, we use actual photos of our coins, rather than just stock artwork from the Mint. We frequently update and upgrade the photos that appear with our listings, using improved cameras and lenses and better lighting.

We will honor your requests for additional photos as quickly as our schedule permits. The item "2016 $20 DC Comics Originals Man of Steel Superman 1 oz Pure Silver Color Proof" is in sale since Monday, October 3, 2016.