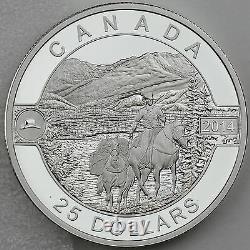 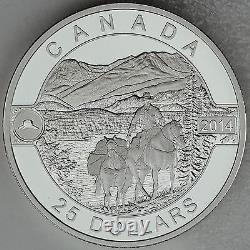 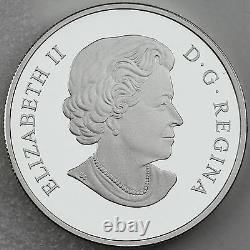 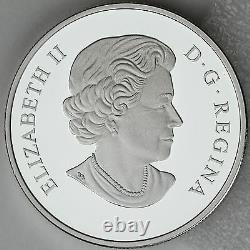 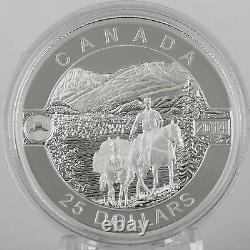 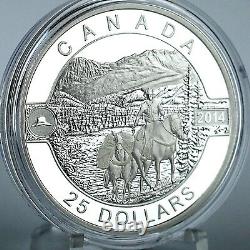 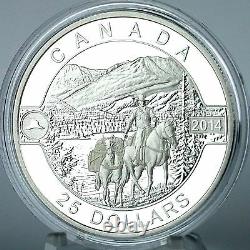 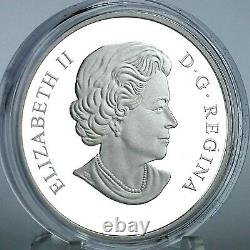 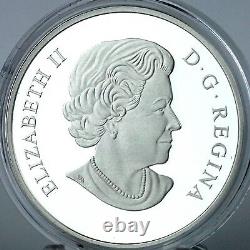 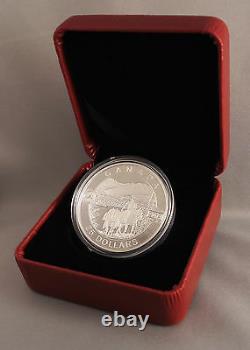 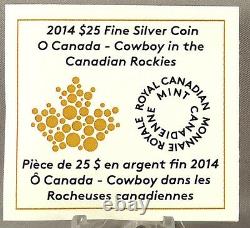 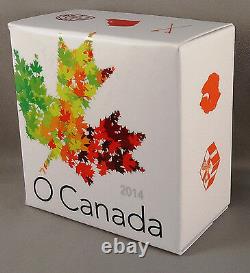 To protect against these risks, we do not sell'second-hand' coins. All of our Canadian coins are stored in a climate controlled, smoke-free vault. Composition - 99.99% pure silver. Weight (g) - 31.39 one troy oz. Certificate serialized (serial numbers will vary).

Face value - 25 dollars (a legal tender Canadian coin). Artists - Bernie Brown (reverse), Susanna Blunt (obverse). The foothills of the Canadian Rockies are home to Canada's cowboy heritage. Geologically unique, this exceptionally jagged, highly glaciated mountain range provides not only a stunning backdrop for those who pursue their livelihoods on its rolling foothills, but the shelter and rich, moist soil that are essential to successful ranching. For more than a century, these resilient Canadian cowboys and cowgirls have worked with the ebb and flow of the land, which is at turns either cruel or kind, evolving a way of life unique to this land and those whose lives and livelihoods depend on it. The legendary image of the western cowboy is most often invoked in reference to the history of the United States, but Canada has a rich cowboy heritage. Canadian ranching is said to have emerged in British Columbia's interior valleys about a decade before it began in southern Alberta.

In each of these regions, however, the emergence of ranching was driven by distinct factors. While ranching in British Columbia was fuelled by various gold rushes, Alberta ranching was initially begun by absentee landowners from Europe and the United States. These owners gave way to local homesteads and smaller operations by the turn of the 20.

Century, in part because of new laws that eliminated the large lease holding system that had fuelled the earliest ventures. Own a piece of Canada's natural beauty, vividly captured in a half-ounce of 99.99% pure silver! The fourth coin in this beautiful 2014 O Canada series, which focuses on iconic Canadian images, pays tribute to the cowboy in the Canadian Rockies. Masterfully crafted by Royal Canadian Mint engravers using a variety of engraving techniques and finishes to bring depth and texture to the artist's original depiction of an iconic Western Canadian moment.

An excellent addition to any nature-focused, cowboy-themed, or Canadiana collection. The arresting design presents a Canadian cowboy on horseback, leading a second horse through the Canadian Rockies. In the central foreground of the image, a cowboy on horseback, fully outfitted in cowboy hat, shirt, and breeches, sits in the saddle on his mount as he holds in his right hand the reins of a second horse that is fully loaded for a back-country packing adventure. The cowboy and his horses stand on top of a rocky outcropping, flanked on either side by conifers. Just behind and below them in a low valley is a wide river.

In the middle distance is the opposite shoreline of low foothills covered in pines. Beyond the far shore, rising high into the sky, are the jagged snowy peaks of the Canadian Rockies. Each coin is encapsulated and presented in a Royal Canadian Mint-branded maroon clam-shell with a custom beauty box. Are also available for an additional charge.

All of the coins offered in this listing are unsearched. Many coin dealers search all coins when they are received from the Mint.

We will honor your requests for additional photos as quickly as our schedule permits. The item "2014 $25 Cowboy in the Canadian Rockies 1 Oz Pure Silver Proof Coin'O Canada' 4" is in sale since Monday, July 21, 2014.