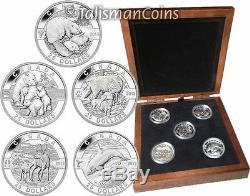 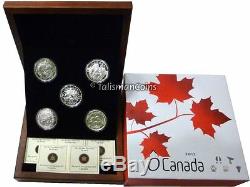 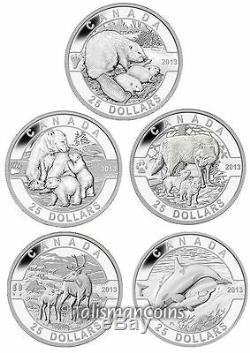 Canada's national identity is much like its majestic landscape: diverse, storied, and always fascinating! In the ever-changing world of Canadiana, a few concepts tend to reflect the nations natural assets and social and cultural institutions.

Born of this complex background, these five Canadian animal icons. Are undeniable touchstones of the majestic land and its wildlife. These are the scenes that plumb the depths of Canada's own pride in itself, while kindling the world's love for the great nation that is Canada! One ounce wildlife proofs, each depicting a mother with her babies!

Collect these five pure silver. Proofs in this deluxe, solid wood presentation case, then revisit your coins again and again to marvel at their cultural significance and detailed imagery! Five Low-Mintage, Highly Detailed Works of Art - Each Depicting a Mother Animal and Her Babies!

A Highly Detailed, Original Work of Art! Each release in the in the exciting O Canada series. Features a meticulously rendered design - an original work of art by Canadian wildlife. The Mint's traditional-style engraving has produced a magnificent work of beauty. The distinct design hallmark of the O Canada series has the central image set between two semi-circular banners (each laser polished to a gleaming, mirror-like finish) with the top band proudly proclaiming the legend Canada, and the denomination in the lower band.

The design also features a small symbol of each animal to the left of the central wildlife vignette, balancing the date of issue to the right. Complete 5-Coin Collection Proof Set in Solid Wood Case!

The Royal Canadian Mint refines the purest silver in the world. The RCM is also the only mint in the world to issue commemorative coins in a. Each one troy ounce silver proof coin is 99.99% pure! A meticulously detailed and finely engraved portrait of an iconic Canadian animal mother and her young. The traditional-style engraving has produced a magnificent work of beauty.

The date and denomination are also indicated. Her Majesty, Queen Elizabeth II. This portrait, the fourth effigy of the queen to appear on Canadian Coinage, was executed by the artist Susanna Blunt. The legend ELIZABETH II D.

REGINA ("Elizabeth II, Queen by the Grace of God") also appears. The coin is encapsulated inside a burgundy leatherette, clamshell-style presentation case, lined with black velvet and protected by a black outer box.

An individually-numbered certificate of authenticity is included. 125 Dollar (5 x 25 Dollars).

Talisman World Coins and Medals has been in business for more than 20 years and is one of the largest world coin direct distributors and wholesalers in the world. The item "2013 O Canada Complete 5 Coin $25 1 Oz Silver Proof Set in Wooden Case" is in sale since Saturday, January 18, 2014. This item is in the category "Coins & Paper Money\Coins\ Canada\Commemorative". The seller is "talismancoins" and is located in Saint Louis, Missouri. This item can be shipped worldwide.