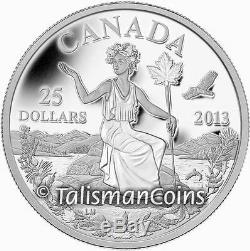 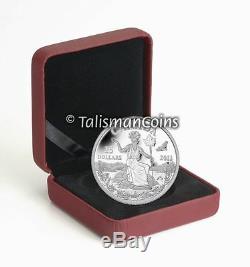 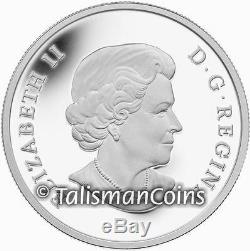 FIRST IN A NEW SERIES - and a phenomenal INVESTMENT OPPORTUNITY! This beauteous, low mintage (only 8,500) proof features the allegorical goddess or personification, Miss Canada, the Lady of the Great White North - stuck in one troy ounce of pure silver! Most countries have a female personification or goddess, who allegorically represents the entire country. For example: The United States.

Who sows peace and prosperity for her people! Has its own goddess, Greenlandia. It has been decades since Canada was represented in this way. To the best of our knowledge, Canada has never been personified allegorically on a coin. All that is about to change - Talisman Coins and the Royal Canadian Mint are proud to present the first three Miss Canada coins - one proof each in the metals of bronze, silver and gold! These are the very first entries into what is planned as an ongoing series, with a new design every year!

The three precious metal proofs in the new 2013 Miss Canada Program. Mintage of 15,000, and. The first ever bronze proof in Canadian history! Mintage of only 2,000! Masterpieces of the Minter's Art - The Lady of the Great White North!

This three coin program re-introduces Miss Canada to the world! The vignette by Canadian artist Laurie McGaw features an iconic rendering of a new Canada allegory! Seated on the throne of the Canadian Shield, this classically dressed, seated female portrays elegance and beauty.

Appropriate, Miss Canada sports a crown of maple leaves - an iconic image associated with Canada for more than two centuries. She raises her right hand with open palm in a gesture of peace and welcome.

In her left arm she holds a staff bearing a large maple leaf. Her bare right foot is visible beneath the hem of her long gown, putting Miss Canada in direct contact with the natural world within which she is positioned.

In the landscape surrounding her we see the incredible natural variety of Canada. In the distant background rise vast mountains and a pure glacial river.

The middle ground is occupied by a large waterway bounded by a wild forested shoreline. An eagle, an important element of Native American spiritualism, flies above her. In the water below the eagle, a jumping fish represents the vigor and power of Canadas natural world. The base of the image is festooned with a garland composed of more than twenty-five species of Canadian leaves, symbolizing Canadas natural diversity and multicultural makeup. This is the very first issue in the planned, annual series of Miss Canada coins, featuring every-changing designs. This beauty, with its very affordable price and very limited mintage of only 8,500, seems destined to sell out quickly! Get this first ever Miss Canada silver proof while you can!

The Royal Canadian Mint refines the purest silver in the world. The RCM is also the only mint in the world to issue commemorative coins in a. This one ounce silver coin is 99.99% pure!

An allegorical scene depicts Miss Canada, the Goddess of the Great White North. The date and denomination are both indicated. Her Majesty, Queen Elizabeth II of England. This portrait, the fourth effigy of the queen to appear on Canadian coinage, was executed by the artist Susanna Blunt.

In the years following Confederation, through the First World War and in various forms until the middle of the 20th century, Canada too had a well-known feminine national allegory, Miss Canada, whose emergence and evolution in Canadas formative era reflects the fascinating and often complex story of Canadian nationalism. In her earliest years, this Canadian allegorical figure was portrayed as the daughter of Englands feminine allegory, Britannia.

In the classical robes of ancient Greece and Rome, Miss Canada was youthful and obedient to her august elder. The image was used in many ways, from political cartoons to product advertising. But as Canadas international relationships changed over timeparticularly its links with both England and the United Statesso did the treatment and use of the Miss Canada allegory.

By the outset of the First World War, she was so well known as to form part of the mythological vernacular of the country, having also appeared in literature by this time. The First World War was a time of massive upheaval around the world but also within Canada itself. As the young country struggled to define its values, it engaged in a fluid and often disorienting dance between past and present.

Although Canada was still a Dominion of the British Empire, nationalism was gaining momentum. At the same time, the tension between Canadas original European settlement groupsthe French and the Englishwas ongoing, fueled by contemporary events and public policy. Women were fighting for the vote.

Discovery and progress on multiple fronts were changing the way people lived and worked. In short, Canada, still largely amorphous, struggled to define itself at a time when its western cultural context was itself undergoing massive change. Inevitably, this cultural journey was reflected in the figure of the Canadian allegory.

On one hand, there was reversion to the original dedicated daughter of Britannia allegory as it was propagandized by the government to maintain support for the war effort once Canadian soldiers began dying in large numbers. On the other hand, with society marching to the beat of progress, the figure herself necessarily had to modernize, her role as admiring daughter at the feet of Mother Britannia giving way to a stronger and more modern woman. As national identity crystallized following Canadas contribution to the war effort and full political independence after the war, the once-ubiquitous Canadian female allegory slowly disappeared from popular culture.

Today, such an allegory must necessarily reflect an entirely different set of ideals, containing the contrasting but congruent values of diversity and interconnection that make this country unique. Talisman World Coins and Medals has been in business for more than 20 years and is one of the largest world coin direct distributors and wholesalers in the world. The item "2013 Miss Canada Allegory Seated Goddess Allegorical $25 1 Oz Pure Silver Proof" is in sale since Wednesday, June 5, 2013.