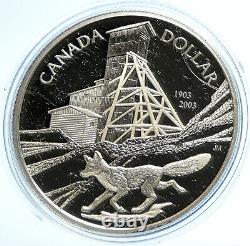 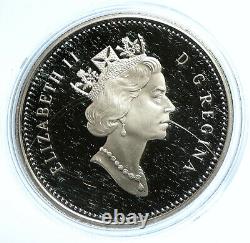 Item: i103658 Authentic Coin of. Queen: 6 February 1952-present 100th Anniversary of the Cobalt Silver Discovery 2003 Proof Silver Dollar 36.07mm (25.18 grams) 0.9999 Silver. CANADA DOLLAR 1903 2003 JM, Silver developments at Cobalt and a fox. Cobalt is a town in Timiskaming District, Ontario, Canada. It had a population of 1,118 at the 2016 Census. In the early 1900s, the area was heavily mined for silver; the silver ore also contained cobalt. By 1910, the community was the fourth highest producer of silver in the world. Mining declined significantly by the 1930s, together with the local population. In late 2017 one publication referred to Cobalt as a ghost town, but the high demand for cobalt, used in making batteries for mobile devices and electric vehicles, is leading to great interest in the area among mining companies. Logan discovered cobalt in 1884 at the future site of the Agaunico Mine, one mile south of Haileybury. Silver was discovered in the area during the construction of the Temiskaming & Northern Ontario Railway (T&NO) from North Bay to the communities of Haileybury and New Liskeard, north of Cobalt.

The discovery was made in 1903, near Long Lake (later called Cobalt Lake), by Ernest Darragh and James McKinley, who were supplying railway ties. Later that year, Tom Hébert found a rich vein on the east side of Cobalt Lake and began a business with hotel owner Arthur Ferland. The silver from both sites was consistently high-grade. The subsequent Cobalt silver rush led to the development of the McKinley Darragh, La Rose, Nipissing, and O'Brien silver mines.

In 1904, Willet Miller, on a visit to Mile 104 on the T&NO, along with brothers Noah and Henry Timmins, named the future town Cobalt. The Timmins brothers bought the remaining claims from Fred La Rose, and erected some cabins. S peculation over mining stocks on Wall Street in New York City required mounted police to control the crowds. The town was incorporated in 1906. By 1908, the camp was considered the world's largest producer of silver and of the cobalt which is a byproduct of the process. In 1911, the 34 mines produced over 30 million ounces (937.5 tons) of silver. The town's population soared to 10,000 by 1909. Mining continued until the 1930s, then slowed to a trickle. Activity renewed in the 1950s then slowly dropped off, and since the 1980s, there have been no operating mines in the area. By the 1960s, the area had produced over 420 million ounces of silver. One mill still operated in the area in 2017, and exploration for diamonds and other minerals was ongoing. The silver mines of Cobalt, and the prospectors and miners who discovered them and worked them, left an indelible mark on Canadian history, and the town is known as the birthplace of hard rock mining in Canada. The ore in Cobalt was close to surface, so men with limited experience could prospect, begin mining, and then hone their skills as the mines went deeper. Those who learned their trade in Cobalt moved north, discovering gold in Kirkland Lake and Timmins and further afield in Canada and around the world. Cobalt mining was done with the use of wheelbarrows, pickaxes, hand steel and dynamite. Canada is a country, consisting of ten provinces and three territories, in the northern part of the continent of North America.

It extends from the Atlantic to the Pacific and northward into the Arctic Ocean, covering 9.98 million square kilometres (3.85 million square miles) in total, making it the world's second-largest country by total area and the fourth-largest country by land area. Canada's common border with the United States forms the world's longest land border. Canada is sparsely populated overall, the majority of its land territory being dominated by forest and tundra as well as the mountain range of the Rocky Mountains; about four-fifths of the population live near to the southern border.

Pursuant to the British North America Act, on July 1, 1867, three colonies joined to form the autonomous federal Dominion of Canada. This began an accretion of provinces and territories to the new self-governing Dominion. In 1931, Britain granted Canada near total independence with the Statute of Westminster 1931 and full sovereignty was attained when the Canada Act 1982 severed the vestiges of legal dependence on the British parliament. Canada is a federal parliamentary democracy and a constitutional monarchy, Queen Elizabeth II being the current head of state.

The country is officially bilingual at the federal level. It is one of the world's most ethnically diverse and multicultural nations, the product of large-scale immigration from many countries, with a population of approximately 35 million as of 2015.

Its advanced economy is the eleventh largest in the world, relying chiefly upon its abundant natural resources and well-developed international trade networks. Canada's long and complex relationship with the United States has had a significant impact on its economy and culture. Canada is a developed country and one of the wealthiest in the world, with the tenth highest nominal per capita income globally, and the eighth highest ranking in the Human Development Index. It ranks among the highest in international measurements of government transparency, civil liberties, quality of life, economic freedom, and education. Canada is a Commonwealth Realm member of the Commonwealth of Nations, a member of the Francophonie, and part of several major international and intergovernmental institutions or groupings including the North Atlantic Treaty Organization, the G8, the Group of Ten, the G20, the North American Free Trade Agreement and the Asia-Pacific Economic Cooperation forum. World-renowned expert numismatist, enthusiast, author and dealer in authentic ancient Greek, ancient Roman, ancient Byzantine, world coins & more. Ilya Zlobin is an independent individual who has a passion for coin collecting, research and understanding the importance of the historical context and significance all coins and objects represent. Send me a message about this and I can update your invoice should you want this method.

Getting your order to you, quickly and securely is a top priority and is taken seriously here. Great care is taken in packaging and mailing every item securely and quickly. What is a certificate of authenticity and what guarantees do you give that the item is authentic?

You will be very happy with what you get with the COA; a professional presentation of the coin, with all of the relevant information and a picture of the coin you saw in the listing. Additionally, the coin is inside it's own protective coin flip (holder), with a 2x2 inch description of the coin matching the individual number on the COA. Whether your goal is to collect or give the item as a gift, coins presented like this could be more prized and valued higher than items that were not given such care and attention to.

When should I leave feedback? Please don't leave any negative feedbacks, as it happens sometimes that people rush to leave feedback before letting sufficient time for their order to arrive. The matter of fact is that any issues can be resolved, as reputation is most important to me. My goal is to provide superior products and quality of service. How and where do I learn more about collecting ancient coins?