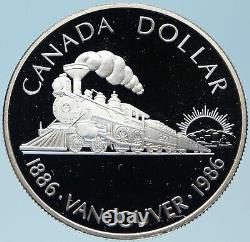 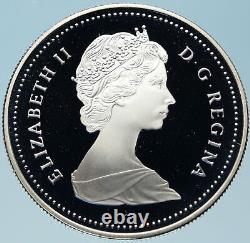 ASW Reference: KM# 149 ELIZABETH II D·G·R EGINA, Elizabeth facing right. CANADA DOLLAR1886·VANCOUVER·1986, Steam engine train moving to left foreground, out of sunset in background. Vancouver is a coastal seaport city in western Canada, located in the Lower Mainland region of British Columbia. As the most populous city in the province, the 2016 census recorded 631,486 people in the city, up from 603,502 in 2011.

The Greater Vancouver area had a population of 2,463,431 in 2016, making it the third-largest metropolitan area in Canada. Vancouver has the highest population density in Canada with over 5,400 people per square kilometre, which makes it the fifth-most densely populated city with over 250,000 residents in North America behind New York City, Guadalajara, San Francisco, and Mexico City according to the 2011 census.

Vancouver is one of the most ethnically and linguistically diverse cities in Canada according to that census; 52% of its residents have a first language other than English. 48.9% have neither English nor French as their first language. Roughly 30% of the city's inhabitants are of Chinese heritage. Vancouver is consistently named as one of the top five worldwide cities for livability and quality of life, and the Economist Intelligence Unit acknowledged it as the first city ranked among the top-ten of the world's most well-living cities for five consecutive years. Vancouver has hosted many international conferences and events, including the 1954 British Empire and Commonwealth Games, UN Habitat I, Expo 86, the World Police and Fire Games in 1989 and 2009; and the 2010 Winter Olympics and Paralympics which were held in Vancouver and Whistler, a resort community 125 km (78 mi) north of the city. In 2014, following thirty years in California, the TED conference made Vancouver its indefinite home. Several matches of the 2015 FIFA Women's World Cup were played in Vancouver, including the final at BC Place.

The original settlement, named Gastown, grew up on clearcuts on the west edge of the Hastings Mill logging sawmill's property, where a makeshift tavern had been set up on a plank between two stumps and the proprietor, Gassy Jack, persuaded the curious millworkers to build him a tavern, on July 1, 1867. From that first enterprise, other stores and some hotels quickly appeared along the waterfront to the west. Gastown became formally laid out as a registered townsite dubbed Granville, B.

I" standing for "Burrard Inlet. As part of the land and political deal whereby the area of the townsite was made the railhead of the Canadian Pacific Railway (CPR), it was renamed "Vancouver" and incorporated shortly thereafter as a city, in 1886.

By 1887, the Canadian Pacific transcontinental railway was extended westward to the city to take advantage of its large natural seaport to the Pacific Ocean, which soon became a vital link in a trade route between the Orient / East Asia, Eastern Canada, and Europe. As of 2014, Port Metro Vancouver is the third-largest port by tonnage in the Americas (recently displacing New York City), 27th in the world, the busiest and largest in Canada, and the most diversified port in North America.

While forestry remains its largest industry, Vancouver is well known as an urban centre surrounded by nature, making tourism its second-largest industry. Major film production studios in Vancouver and nearby Burnaby have turned Greater Vancouver and nearby areas into one of the largest film production centres in North America, earning it the nickname "Hollywood North". Canada is a country, consisting of ten provinces and t hree territories, in the northern part of the continent of North America.

It extends from the Atlantic to the Pacific and northward into the Arctic Ocean, covering 9.98 million square kilometres (3.85 million square miles) in total, making it the world's second-largest country by total area and the fourth-largest country by land area. Canada's common border with the United States forms the world's longest land border. Canada is sparsely populated overall, the majority of its land territory being dominated by forest and tundra as well as the mountain range of the Rocky Mountains; about four-fifths of the population live near to the southern border. The majority of Canada has a cold or severely cold winter climate, but southerly areas are warm in summer.

The land now called Canada has been inhabited for millennia by various Aboriginal peoples. Beginning in the late 15th century, British and French colonies were established on the region's Atlantic coast. As a consequence of various conflicts, the United Kingdom gained and lost North American territories until left, in the late 18th century, with what mostly comprises Canada today. Pursuant to the British North America Act, on July 1, 1867, three colonies joined to form the autonomous federal Dominion of Canada.

This began an accretion of provinces and territories to the new self-governing Dominion. In 1931, Britain granted Canada near total independence with the Statute of Westminster 1931 and full sovereignty was attained when the Canada Act 1982 severed the vestiges of legal dependence on the British parliament. Canada is a federal parliamentary democracy and a constitutional monarchy, Queen Elizabeth II being the current head of state. The country is officially bilingual at the federal level. It is one of the world's most ethnically diverse and multicultural nations, the product of large-scale immigration from many countries, with a population of approximately 35 million as of 2015.

Its advanced economy is the eleventh largest in the world, relying chiefly upon its abundant natural resources and well-developed international trade networks. Canada's long and complex relationship with the United States has had a significant impact on its economy and culture. Canada is a developed country and one of the wealthiest in the world, with the tenth highest nominal per capita income globally, and the eighth highest ranking in the Human Development Index. It ranks among the highest in international measurements of government transparency, civil liberties, quality of life, economic freedom, and education.

Canada is a Commonwealth Realm member of the Commonwealth of Nations, a member of the Francophonie, and part of several major international and intergovernmental institutions or groupings including the North Atlantic Treaty Organization, the G8, the Group of Ten, the G20, the North American Free Trade Agreement and the Asia-Pacific Economic Cooperation forum. World-renowned expert numismatist, enthusiast, author and dealer in authentic ancient Greek, ancient Roman, ancient Byzantine, world coins & more.

Ilya Zlobin is an independent individual who has a passion for coin collecting, research and understanding the importance of the historical context and significance all coins and objects represent. Send me a message about this and I can update your invoice should you want this method.

Getting your order to you, quickly and securely is a top priority and is taken seriously here. Great care is taken in packaging and mailing every item securely and quickly. What is a certificate of authenticity and what guarantees do you give that the item is authentic? You will be very happy with what you get with the COA; a professional presentation of the coin, with all of the relevant information and a picture of the coin you saw in the listing.

Additionally, the coin is inside it's own protective coin flip (holder), with a 2x2 inch description of the coin matching the individual number on the COA. Whether your goal is to collect or give the item as a gift, coins presented like this could be more prized and valued higher than items that were not given such care and attention to.

When should I leave feedback? Please don't leave any negative feedbacks, as it happens sometimes that people rush to leave feedback before letting sufficient time for their order to arrive. The matter of fact is that any issues can be resolved, as reputation is most important to me. My goal is to provide superior products and quality of service. How and where do I learn more about collecting ancient coins?