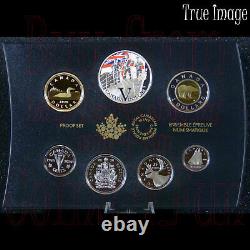 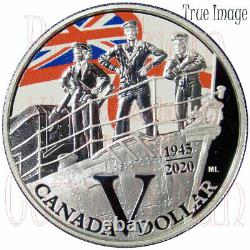 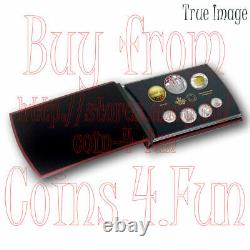 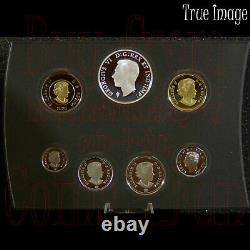 On the 75th anniversary of V-E Day, we salute those who served in the Royal Canadian Navy (RCN) and Women's Royal Canadian Naval Service (WRCNS or "Wrens") during the Second World War. The 2020 Special Edition Silver Dollar is exclusive to this proof set. Its Naval Ensign is a colourful symbol of nearly six years of bravery and sacrifice at sea, where Canada's naval forces contributed significantly to the Allied victory in 1945from the Atlantic to the Pacific, and waters in between. Honour the Royal Canadian Navy with this special edition silver dollar proof set.

TWO SET EXCLUSIVES: Struck in 99.99% pure silver, the selectively coloured dollar coin is only available as part of this set, which also includes a 2020 version of the 1945 Victory five-cent coin. CONTINUING FROM THE 2020 PROOF DOLLAR: The special edition silver proof dollar is the continuation of a story that began on the 2020 Proof Dollar, whose sailor appears on this coin. SELECTIVE COLOUR: Selective colour highlights the Naval Ensign that was proudly flown on all Royal Canadian Navy vessels during the Second World War. A VICTORY PRIVY MARK: Every coin in our 2020 75th Anniversary of V-E Day collection including this set's silver proof dollarfeatures a special privy mark that was inspired by the 1945 Victory nickel design. INCLUDES THE RARELY SEEN 50-CENT COIN: Every denomination in circulation is represented in this set, including the rarely seen 50-cent coin. HISTORIC OBVERSE: Another collection-wide feature is the obverse design, which features the effigy of the reigning monarch in 1945. SHOWCASE THIS SET WITH PRIDE: Book-style packaging allows you to showcase this set with pride.

Each coin was hand selected to provide you with the best samples. INCLUDES A HOLOGRAPHIC V-E DAY DECAL : A holographic V-E Day decal extends the celebration beyond the coin and onto the beauty box.

The obverse features the effigy of King George VI by T. Paget and a Victory privy mark. For this design, I drew upon my own experience aboard naval ships as a member of the Canadian Forces Artist Program. The White Naval Ensign symbolizes the common cause and purpose that culminated in V-E Day. I hope its colour and movement will draw the viewer into this moment inhabited by these three members of the Royal Canadian Navy.

May 8, 1945: The RCN. The Battle of the Atlantic was the longest continuous battle of the Second World War.

And until the battle officially ended on V-E Day, Canada's navy continued to be a central participant. The Royal Canadian Navy's most significant contribution to the Allied victory was through its work as a convoy escort force.

In the last two years of the war, all air and surface escorts in the northwest Atlantic were operating under Canadian command (the only theatre of the war that was not under British or American command). In 1945, the RCN was one of the world's largest navies with 434 commissioned vessels. In the Mediterranean Sea, RCN ships and crews had taken part in the North African campaign in 1942 and 1943, in the Sicily and Italian campaigns that began in 1943, and in Allied operations in the eastern Mediterranean (Greece) in 1944.

In the Arctic, RCN ships (like the Tribal-class destroyer on the 2020 Special Edition Silver Dollar) escorted convoys on the Murmansk Run, said to be the most dangerous operation due to extreme conditions. Off the coast of occupied Europe, where Canadian ships had taken part in Operation Neptune (D-Day), the RCN continued to support the army's seaward flank as it pushed into Northwest Europe in 1944 and 1945. RCN Bangor-class minesweepers also joined in the international effort to clear European waters after V-E Day. And in the Pacific, where the war continued after Germany's surrender, HMCS Uganda played a support role in the invasion of Okinawa in May 1945 and served as an anti-aircraft guard until July 1945.

The RCN was able to do it all without battleships and submarines. Canada's shipyards had supplied the RCN with 224 Canadian-built frigates, minesweepers and corvettes, the unlikely heroes of the anti U-boat war. It had lost 24 warships, but its ships shared in the sinking of 29 enemy submarines. And of the nearly 2,000 members of the RCN who lost their lives at sea during the war, most were killed in the Battle of the Atlantic. In 1939, Canada's naval force consisted of less than a dozen ocean-going ships and 3,500 officers and men. By 1945, the Royal Canadian Navy had become one of the largest navies in the world, with 95,000 members and 434 commissioned vessels including many Canadian-built corvettes and frigates. The Women's Royal Canadian Naval Service (WRCNS) was established on July 31, 1942. Nicknamed "Wrens, " its members worked as drivers, signallers, radio operators, plotters, mechanics, cooks, clerks and more. Although regulations did not permit them to serve at sea, about 1,000 WRCNS members served abroad, with more than half of them posted to Newfoundland. Newfoundland wasn't part of Canada until 1949 so the future Canadian province was considered an overseas posting. By 1945, more than 6,000 women had served in Canada's navy.

I do leave feedback for everyone. The item "1945-2020 Royal Canadian Navy V-E Day 75 Special Edition Silver Dollar Proof Set" is in sale since Friday, August 28, 2020. This item is in the category "Coins & Paper Money\Coins\ Canada\Commemorative".